God Supplies the Strength We Need in Hard Times

Are you at your breaking point? Cue the eagle.

When our spiritual batteries are running low, all we have to do is wait on the Lord and ask Him for strength. God promises that help will flow in response to such a request.

All of us have bad days. In some seasons of life, our struggles and hardships are difficult to bear. No matter how thick your skin is, how many Bible verses you have memorized, or how high your pain threshold is, even the best men are men at best. Everyone has a breaking point. Just look at the lives of those we would consider the strongest characters in Scripture:

King David was a man after God’s own heart. For decades, he held on to God’s promise that he would become king. But then he gave up and moved to Goliath’s native country, where he worked for a Philistine king and fought the wrong battles (1 Sam. 27).

Abraham, the father of faith, ran away from the promised land and lied about his wife being his sister to protect himself. Why? He was afraid (Genesis 20).

The apostle Paul begged God three times to take away a painful trial that was too heavy for him to carry (2 Cor. 12:7-8).

Elijah, the mightiest of the miracle-working prophets, had an emotional breakdown when a woman cussed him out. He ran away from home, hid under a tree, and wished for death (1 Kings 19:4).

The prophet Jeremiah became so discouraged that he told God he was never going to preach again (Jer.20:9).

John the Baptist is the man who Jesus once said was the best person ever to be born of a woman wondered whether Jesus was the Messiah he’d been waiting for (Luke 7:20).

My point here isn’t to bash on the people in the Bible. My point is to show that we all struggle. These guys were giants of the faith and yet they all ran out of strength. And guess what? So will you. Especially when you are forced to face the endurance sport that is grief. Whether your grief is from the death of a marriage, the end of a friendship, or the loss of a position at work, there will be times, even as a believer, when you are pushed to your limits and beyond. I know, probably not the encouraging pep talk you came here to read. But the good news is, when God’s people run low on our own strength, we have a source of power we can rely on.

Ask God for Strength or "Cue the Eagle"

There’s a scene somewhere in the nine hours of the Lord of the Rings films where Gandalf the Grey is about to be killed but is saved at the last minute when an enormous eagle swoops in and carries him away. Something similar happens in one of The Hobbit movies. A bunch of vicious werewolves have the little dude with hairy feet and his bearded dwarf friends trapped in a tree on the edge of a cliff; they’re about to fall when a flock of eagles comes and whisks them away to safety. Keep those pictures in mind, and read this carefully:

"Even the youths shall faint and be weary, And the young men shall utterly fall, But those who wait on the LORD Shall renew their strength; They shall mount up with wings like eagles, They shall run and not be weary, They shall walk and not faint" (Isaiah 40:30-31).

"But what if we found day-to-day ways of relying on God’s strength? This could catalyze us when we are devoid of strength."

Like Gandalf and his Hobbit friends, as a blood-bought child of the King of kings, you have the right to cue the eagle anytime you are in need. Isaiah said even the youths will be weary and tired and even young men will fall in exhaustion. Young people have more energy than anyone, but Isaiah makes it clear that even they will run out of gas. When our spiritual batteries are running low, all we have to do is wait on the Lord and ask Him for strength. God promises that help will flow in response to such a request. That’s what it means to cue the eagle.

Instead, in times of stress and fatigue, we can turn to other things or distractions instead of reaching out to God. We can grasp for counterfeit sources of strength. But what if we found day-to-day ways of relying on God’s strength? This could catalyze us when we are devoid of strength.

Train for Your Future Trial

The time to prepare for a marathon is not at the starting line, but long before race day approaches. So it is in your walk with Jesus, you should always train for the trial you’re not yet in. At any given time, we’re either in a trial, coming out of a trial, or coming upon a trial. So before you hit cruise control when life feels easy, remember there are things we can do to prepare ourselves for trials ahead. Undoubtedly, the most important thing we can do is to cultivate our relationship with Jesus.

Read what Jesus had to say about what it means to stay connected to Him:

"I am the true vine, and My Father is the vinedresser. Every branch in Me that does not bear fruit He takes away; and every branch that bears fruit He prunes, that it may bear more fruit. You are already clean because of the word which I have spoken to you. Abide in Me, and I in you. As the branch cannot bear fruit of itself, unless it abides in the vine, neither can you, unless you abide in Me. I am the vine, you are the branches. He who abides in Me, and I in him, bears much fruit; for without Me you can do nothing" (John 15:1-5).

We can ask Jesus to abide with us, for the here and now. We can pray for a deeper intimacy with Him.

Excerpted and partially adapted from Through the Eyes of a Lion: Facing Impossible Pain, Finding Incredible Power © 2021 Levi Lusko. Published by Lifeway Press.

Levi Lusko is the founder and lead pastor of Fresh Life Church, located in Montana, Wyoming, Oregon, and Utah. He is the bestselling author of Through the Eyes of a Lion, Swipe Right, and I Declare War. Levi also travels the world speaking about Jesus. He and his wife, Jennie, have one son, Lennox, and four daughters: Alivia, Daisy, Clover, and Lenya, who is in heaven.

Learn More About Through the Eyes of a Lion

What Does It Look Like to Walk in the Spirit?

We are new creations if we are in Christ, yes, but the battle rages on until Christ returns. The flesh and the Spirit have competing agendas.

Does Suffering Have a Higher Purpose In Our Lives?

Suffering reveals something about God to the world. Job didn’t suffer perfectly, but he did suffer well. When we suffer well—remaining steadfast, hopeful, faithful, and teachable—it is evidence to the world that God is more valuable and trustworthy than wealth, health, and even family. 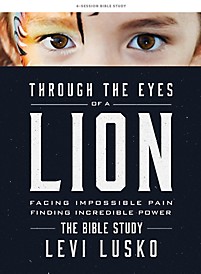 Whether you’ve suffered in the past, are in a trial now, or want to prepare for the inevitable challenges to come, this Bible study provides help, hope, and healing, all for the glory of God. Both instructive and deeply inspirational, this study helps you see your life with new perspective through the eyes of faith.

Read the first session of the Bible study, Through the Eyes of a Lion.