What Is Your Money Personality?

You and your spouse’s past money experiences influence the way you think about money today.

In late 1929, the stock market began to tumble downward. The tumble created a panic, and the market crashed. Banks closed their doors, companies went out of business, and people lost their jobs.

This began the era from 1929 to 1939 known as the Great Depression. During this time, 15 million people were unemployed, around a 25% unemployment rate. Many lived with hunger and most lived with fear.

You may have known someone who lived during the Great Depression—maybe your grandparents or great-grandparents. And if you were to tell me about the way they managed their money, you would probably mention that they were very frugal people.

Such a comment is common when describing those who lived through the Great Depression. Their past experiences influenced their present mindset.

Generations are not only known for being born during a certain time period. Generations are also known for their shared characteristics. Of course, this does not mean that everyone who is a part of the Millennial generation will be exactly the same. But there will be some commonalities found.

How does this happen?

Consider the Millennial generation. They are the generation who grew up seeing reports of school shootings, watching the Twin Towers fall, and witnessing either their parents or themselves lose money and jobs as the market plummeted in 2008.

Experiences like these had an impact on Millennials’ thinking. From a money standpoint, Millennials tend to be less eager to invest in the stock market; only one in three do so. They also tend to have less confidence in their employers, so they act and work more independently, relying on themselves to make career advancement decisions and earn greater income.

Those who lived through the Great Depression tended to be passionate about saving and distrustful of financial institutions. They would often hide money in their houses, under their mattresses or buried in their backyard. They did a great job of living within their means and avoiding debt.

Each generation is shaped by their shared experiences.

What Is Your Story?

My wife and I grew up with different money experiences. Neither was right or wrong, just different.

I have early childhood memories of getting food from our church’s food pantry because we did not have money to purchase food. My wife had no such childhood memory. I grew up in a house where I was encouraged to start preparing for retirement and open a Roth IRA when I was around 16 or 17-years old. My wife’s experience was different.

Both of us grew up in homes that modeled and encouraged generosity—sometimes extravagant generosity. Our experiences shaped our understanding and view of money.

So what is your story?

Think back on your past. What were your experiences with money? There were probably some significant, national, money-related events that you experienced. If you are Millennials, your experiences may include the 2008 market downturn.

But what about on a more personal level?

Did you witness your parents struggle to pay the bills?

Did you see your parents get crushed by a load of debt?

Or was money just not an issue and spending  frequent?

What about the conversations you had growing up? Did they include advice on giving generously, saving wisely, and living appropriately? Or did no such conversation occur?

Combine the influence of these experiences with you and your spouse’s natural personality, and you begin to get close to understanding you and your teammate’s money personalities.

Why is it important to understand your money personalities?

Empathy. When you are empathetic toward your teammate’s money personality, you can better understand where he or she is coming from when making money decisions.

Art Rainer is the Vice President for Institutional Advancement at Southeastern Baptist Theological Seminary. He holds a Doctor of Business Administration from Nova Southeastern University and an MBA from the University of Kentucky. He writes widely about issues related to finance, wealth, and generosity, and is the author of The Marriage Challenge: A Finance Guide for Married Couples and The Money Challenge: 30 Days of Discovering God's Design for You and Your Money. Art lives in Wake Forest, North Carolina with his wife, Sarah, and their three children.

When we use what He has given us for His purposes, that's biblical stewardship. These five values complement one another in earning, saving, giving, and spending money by good stewardship practices.

Principles and best practices are of no value if we only know them intellectually. Knowing and doing is the key to experiencing God’s promises. Living accordingly will help you to thrive.

A Greater Purpose for Your Money

But in your planning, we’d like you also to consider the potential missteps on your quest to achieve those goals. Before you can prosper from your newly minted financial resolutions, it’s wise to take a good look at the months ahead. 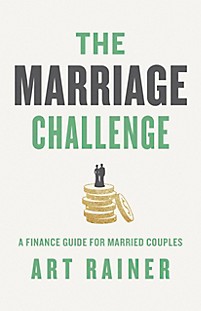 In The Marriage Challenge: A Finance Guide for Married Couples, financial expert and author of The Money Challenge Art Rainer takes you on a journey to a financially healthy marriage. Get started on the right foot, or get back on the right track, by accepting the challenge and realizing God's design for money and marriage.