The History of "Great Is Thy Faithfulness"

The words of many of our favorite hymns are born out of life-changing experiences. But in the case of "Great Is Thy Faithfulness," it came from something very ordinary.

The words of many of our favorite hymns are born out of life-changing experiences.

Charles Wesley composed the joy-filled "And Can It Be" after his dramatic, personal conversion experience. And Horatio Spafford penned the words of comfort found in "It Is Well with My Soul" after the tragic death of his children in a shipwreck over the Atlantic Ocean.

On the other hand, the words of some hymns spring not from a traumatic occurrence in the writer's life but in the midst of the daily routine. That is just the case in the writing of one of the 20th century's most loved hymns: "Great Is Thy Faithfulness." 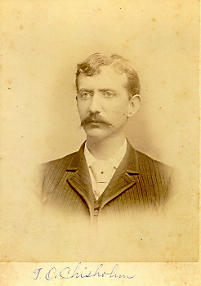 Thomas Chisholm was born in a simple log cabin in Franklin, Kentucky, in 1866. Lacking a high school education or any college training, he became a school teacher at the age of 16 and later entered the newspaper business.

The following years found him ordained a pastor, but poor health forced him to leave the ministry. After a time of recuperation, he moved to New Jersey to work as an insurance agent.

A prolific writer of poetry, he sent a collection of his poems in 1923 to his good friend William Runyan, a musician associated with Chicago's Moody Bible Institute, who also worked for a hymnal publishing company.

Melody Forms Out of A Simple Prayer

While on a trip to Baldwin, Kansas, Runyan leafed through the poems sent by Chisholm and was immediately taken in by the depth of meaning and lyrical beauty of the words found in the poem "Great Is Thy Faithfulness."

Years later, Runyan recalled, "This particular poem held such an appeal that I prayed most earnestly that my tune might carry over its message in a worthy way."

Out of a simple prayer, Runyan's melody took shape, and the completed hymn was published by Runyan that same year.

The Song Catches on with Billy Graham

Due to Runyan's association with Moody Bible Institute, "Great Is Thy Faithfulness" became a favorite with the students and faculty alike and has become the Institute's unofficial college hymn.

Yet, it was slow to catch on in churches across the United States until Billy Graham began to include the hymn in his crusades. It was introduced to the people of Great Britain during Graham's crusade there in 1954 and has since become one of England's most popular hymns.

An Explanation of the Poetry

The hymn's first verse is a simple expression of God's unchanging faithfulness, based on Lamentations 3:22 (KJV): "It is of the LORD's mercies that we are not consumed, because his compassions fail not."

Verse two continues with an expression of God's faithfulness to us in the natural world He created—the changing of the seasons, the movements of the celestial bodies—all joining together in praise to their Creator.

The hymn culminates in the final verse with the testimony of peace that comes through redemption, God's abiding presence in our daily lives, and the blessed hope of heaven.

The refrain echoes the infinite faithfulness of God to extend mercy and compassion: "They are new every morning: great is thy faithfulness" (Lamentations 3:23, KJV).

Chisholm's Thoughts on the Hymn

Looking back on the writing of the hymn, Chisholm recalled in 1941, "My income has not been large at any time due to impaired health in the earlier years which has followed me on until now. Although I must not

fail to record here the unfailing faithfulness of a covenant keeping God and that He has given me many wonderful displays of His providing care, for which I am filled with astonishing gratefulness."

Lyrics to the Hymn

Great is Thy faithfulness O God, my Father; There is no shadow of turning with Thee. Thou changest not, Thy compassions, they fail not; As Thou hast been, Thou forever wilt be.

Summer and winter, and springtime and harvest, Sun, moon and stars in their courses above, Join with all nature in manifold witness, To Thy great faithfulness, mercy and love.

Pardon for sin and a peace that endureth, Thine own dear presence to cheer and to guide; Strength for today and bright hope for tomorrow, Blessings all mine with ten thousand beside!

Listen to "Great Is Thy Faithfulness"

Articles Recommended for You

The Story Behind "Jesus, Lover of My Soul"

Read the remarkable true story behind this all-time favorite hymn and how it began in the throes of the Civil War.

The History Behind "The Old Rugged Cross"

This gospel hymn favorite was written by a self-taught, traveling worship leader—later recorded by numerous artists including Bart Millard of MercyMe, Kevin Max of dc Talk, Amy Grant and Selah.

Award-winning singer Natalie Grant shares her story of hope, waiting and restoration.
Eric Wyse serves as pastoral associate for music and worship in Franklin, Tennessee, and is a songwriter and composer.