8 "I Will" Phrases that Can Change Your Life

Thom Rainer, president of Lifeway Christian Resources, tells a remarkable story of obedience and revival with an excerpt from his book, “I Will.”

His name was Jeremiah Lanphier.

For days, Lanphier had been handing out flyers about a time of prayer. He likely distributed more than 20,000 flyers by himself.

He was a man under God’s conviction. He was desperate for a move of God, and he knew no human-powered system or organization could manufacture such a move.

And he called others to prayer, as well.

Lanphier probably had great anticipation that many would show up at noon on September 27. The city had a population of 1 million. His flyers were likely seen by more than the original 20,000 recipients of the flyers.

So he went to the borrowed upper room of a church and prayed and waited. For 30 minutes no one showed up. Then he heard the footsteps of a few coming to the prayer meeting. Six other people joined him.

The presence of God was so powerful. Those who were in the meetings decided to have the gatherings every day. And the numbers continued to increase. By winter of 1857, the prayer meetings were filling three large churches every day. Then, by March of 1858, every available public hall and church in New York City was filled every day.

The prayer movement spread across the nation. At one season of this movement, 10 thousand people were becoming believers each week. More than one scholar has estimated that 1 million people became followers of Christ through these prayer meetings.

A movement had begun. Today, I am praying for another movement of God.

A Movement Where People Say, “I Will”

I am concerned about our churches. I am not alone.

I will not bore you with statistics about the state of American congregations. Suffice it to say, it is not a pretty picture.

It Is Time to Start the Movement

It is time to stop placing the blame elsewhere. It is time to look into the mirror and ask God where we can say, “I will.”

We are members of our respective churches. We are responsible. Is it possible, through us, God will start a movement?

8 “I Will” Phrases that Will Change Your Life

It is time to become those types of obedient church members in our congregations. It is time to take 1 Corinthians 12 seriously and be a vital part of the body of Christ.

My Personal “I Will” Story After a Tragedy

A few years ago, I found myself in the hospital waiting room with my wife and the parents of my daughter-in-law. We had been told that it did not look good, but I prayed for a miracle.

When my son, Jess, came into the room, I knew. He did not speak a word. But I knew.

His son, Will, had died. My grandson was with the Lord.

Jess fell on my shoulders. We both began to cry.

How does a dad console his son who just lost a son? What words could I possibly say to comfort him? My words were broken and soft, but I spoke, “Jess, what can I do for you?”

They are words that are etched into my memory for as long as I live.

“Dad, please pray that God will use Will’s life and death to bring glory to His name wherever I go.”

My response was simple: “I will.”

It Is Time: “I Will Make a Difference”

So, beginning this moment, become the type of church member who will be used by God to be an instrument of a movement of revival in our churches. Listen to Him carefully. Follow Him obediently.

And when He speaks to move us to action, be willing to say without reservation or hesitation: I will make a difference. 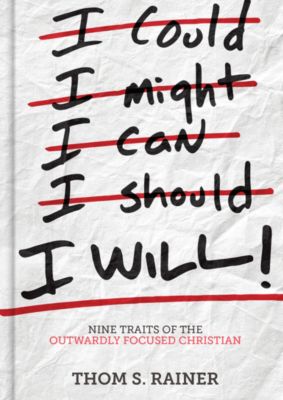 Every day we are faced with the needs of those around us. Emotional. Physical. Spiritual. What are we to do about it? Are these problems for our pastors to address or is there a way for the church member to make an impact that will last?

In I Will, bestselling author Thom S. Rainer answers these questions by offering nine simple traits that all church members can incorporate into your life no matter your background, stage of life or sense of capability.

10 Symptoms of a Selfish Church Member

Discover the attitudes of church members that make all the difference in this excerpt from I Am a Church Member by Thom Rainer.

I Am a Church Member

Thom S. Rainer addresses in detail what congregations should really be focusing on — praying for church leaders, being a functioning member, treasuring church membership, and more.
Thom S. Rainer is the president and CEO of LifeWay Christian Resources, one of the largest Christian resource companies in the world. Also a respected pastor and researcher, he has written more than twenty books and coauthored the No. 1 best seller Simple Church. Rainer and his wife, Nellie Jo, have three grown sons, several grandchildren, and live in Nashville, Tennessee.