Finding Manna in Your Wilderness

God has fed my heart and soul in ways I didn’t know He could do.

This entire planet is about wilderness, but God is about manna. The journey of life is not a matter of finding our way out of the wilderness but finding the manna inside the wilderness.

My parents got married when they were in their mid-twenties. In fact, I clearly remember my mom telling me when I was a college student about her wedding at the age of twenty-six. I thought, “My gosh, she was so old. Surely I won’t be that old when I get married.”

I was born the same year my dad turned thirty and my grandmothers both turned sixty. I loved the math of that. I always planned my life to be sure I’d have a kid within my thirtieth year—not my first since thirty was late in the game. But I would work really hard to have one of my children during that year in my life so I could keep the tradition going.

Funny, the expectations we set for ourselves, how we make all these random executive decisions:

That’s what it comes down to, isn’t it? This idea that a right way and a right time to do something, as well as a wrong way and a wrong time.

That’s what makes life feel like a wilderness, to me at least, which is exactly where the Israelites were located when God provided them with manna. In the wilderness. This entire planet is about wilderness, but God is about manna. The journey of life is not a matter of finding our way out of the wilderness but finding the manna inside the wilderness.

Do you see that? Was I seeing that? We can be in the wilderness and be fed. Those two realities are not mutually exclusive. Life can be painful and beautiful at the exact same time. Scripture says He will bring us “into the wilderness” and “speak tenderly” to us (Hosea 2:14). His kindness brings us to Him. The wilderness does not mean abandonment; it means a chance to see this manna that neither we nor our ancestors have ever known. It won’t always look the way we thought it would. It won’t always look like the family and future we envisioned for ourselves, the kind we hold up as the expected standard. You may even find yourself asking, “What is this? What is it?” That’s because it will be manna. Something else. Something yet unknown. Perhaps even something much, much better.

Deuteronomy 8. Manna that neither I nor my parents had ever known. True, my parents did not know singleness in their thirties. My mother, though a lawyer and hard worker, did not provide for herself for twenty years after graduating from college. My parents have never moved to another town.

Annie F. Downs is a bestselling author, speaker, and podcaster based in Nashville, Tennessee. Flawed but funny, she uses her words to highlight the everyday goodness of a real and present God. An author of multiple bestselling books, 100 Days To Brave, Looking for Lovely, Let’s All Be Brave, Perfectly Unique, and Speak Love, Annie also loves traveling around the country speaking at conferences, churches, and events. While Annie hosts the popular That Sounds Fun Podcast, she is also a co-host on the long-running Relevant Podcast. Annie is a huge fan of bands with banjos, glitter, her community of friends, boiled peanuts, and soccer. Read more at anniefdowns.com and follow her @anniefdowns.

Why Psalm 23 Shows Us We Need God

Psalm 23 is God’s way of saying, “I made you need Me. I am with you no matter what.” In every situation, in every season, our Shepherd is with us. In the green pastures and beside still waters, He is with us.

Can God Use Rehabilitative Pain?

The pain that sifts through our Redeemer’s hands is not punitive because Jesus took all the punishment we deserved on the cross. Therefore the idea that bad things have happened to us because God is punishing us is not theologically sound. However, suffering can be a very rehabilitative means of grace. 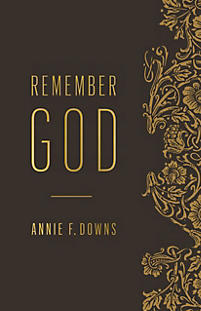 For centuries, God’s people have been building altars to Him—to remind themselves and the people around them of His work. His goodness. His kindness. Stacks of stones. Altars. Temples. Cathedrals. Why? Because they believed God and wanted to remember Him.

In the back of my mind, God reminds me that He is the same trustworthy God—the One who always finishes the stories he starts. And this is my story—of wrestling with our God who gives a limp and a blessing. A God who is always kind even when my circumstances feel the opposite. God is who He says He is. He is kinder than you imagine. In a world where it is easy to forget who He is, we will not. We will remember God. Remember God is written by Annie F. Downs.

Read more of our articles, written by top Christian writers and teachers on topics from life and family to church ministry and faith.