True faith must be more than mere intellectual understanding.

Faith, for the Hebrew, is not memorizing a set of facts to pass a theological assessment administered by a pastor before baptism. Faith always manifests itself with action, which is why James emphasized the point in his Epistle.

Faith, for the Hebrew, is not memorizing a set of facts to pass a theological assessment administered by a pastor before baptism. Faith always manifests itself with action, which is why James emphasized the point in his Epistle: “But someone will say, ‘You have faith, and I have .’ Show me your faith without works, and I will show you faith by my works. You believe that God is one. Good! Even the demons believe—and they shudder” (James 2:18). Demons believe in God but don’t worship and serve Him. True faith must be more than mere intellectual understanding.

The first occurrence of the word faith in the Old Testament is found in Exodus 17:11–13: “While Moses held up his hand, Israel prevailed, but whenever he put his hand down, Amalek prevailed. When Moses’ hands grew heavy, they took a stone and put it under him, and he sat down on it. Then Aaron and Hur supported his hands, one on one side, and the other on the other so that his hands remained steady ( ) until the sun went down. So Joshua defeated Amalek and his army with the sword.” The word “ ” can be translated as steadfastness or faithfulness, as seen in Jeremiah 5:3, “Lord, don’t Your eyes look for faithfulness?” and Habakkuk 2:4, “The righteous will live by faith [faithfulness].”

God is a God who desires to break into civilization. He came down to be with Adam, He came down on Sinai. He came down in His Son Jesus. And He will come down at the end of days. We’re trying to leave the world; God’s entering in.

Further evidence is seen in Hebrews 11 where belief is accompanied with action. This chapter is called the “Hall of Faith” which signifies “faithfulness.” Each man is remembered for what he did, not what he knew intellectually. Faith, in a Hellenistic, Western culture, is normally thought of as agreeing to creeds and catechisms. I do not mean to imply that orthodoxy is not important. It is. But let’s not favor orthodoxy, what we believe, to the extent that we neglect orthopraxy, how we act. When the religious leaders inquired about who their neighbor was, Jesus didn’t distribute a how-to manual for categorizing good and bad neighbors. He shared a story about what a neighbor “does.” He stops for an injured man, tends to his wounds, and he cares for his needs.

The reason God brought Israel out of Egypt was so that they would worship Him and Him alone. In establishing this relationship with them, He not only wanted them to worship Him; He wanted to dwell with them. We see this from the fact that thirteen entire chapters are spent on how to construct the tabernacle (compared to the two on how he created the world).

God is a God who desires to break into civilization. He came down to be with Adam, He came down on Sinai. He came down in His Son Jesus. And He will come down at the end of days. We’re trying to leave the world; God’s entering in. It’s why Exodus begins with a departure and ends with a tabernacle.

Robby Gallaty is the senior pastor of Long Hollow Baptist Church in Hendersonville, Tenn.. He was radically saved out of a life of drug addiction on November 12, 2002. In 2008, he began Replicate Ministries to equip and train men and women to be disciples who make disciples. He is also the author of Growing Up: How to Be a Disciple Who Makes Disciples (2013), Firmly Planted: How to Cultivate a Faith Rooted in Christ (2015), Rediscovering Discipleship: Making Jesus’ Final Words Our First Work (2015), The Forgotten Jesus: Why Western Christians Should Follow an Eastern Rabbi (2017), and Preaching for the Rest of Us (2018). 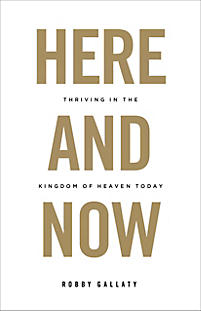 Here and Now by Robby Gallaty

What if you could experience heaven on earth today? Not flying angels singing on clouds, but the fulfilled, abundant life Jesus promised in the Bible—a life that, regardless of your circumstances or your present context, experiences joy, happiness, and peace that is difficult to encapsulate in human terms. What if heaven was available to us today? Pastor and author Robby Gallaty thinks it is.

We have been taught that salvation is getting out of to live in heaven when the Bible teaches that God desires to bring heaven to earth through man. In Here and Now, readers will journey together to uncover the nucleus of Jesus’ messages, which says the opposite. Jesus spoke about the Kingdom of Heaven and the Kingdom of God (both are synonymous as we will see) more than any other topic. No other concept is even close.

Tribalism and the Image of God

Yet they’ll be united in their worship of the Lamb of God, who tore down the hostility that separated them. Because tribalism, racism, and division are sewn into the fabric of human history and culture, we need to see this newfound cross-centered unity as nothing short of a miracle whenever it emerges. This is a snapshot of the imago Dei restored to humanity: a wildly diverse community of people united in worship together.

Place Your Trust in God

Though I was able to try out for two NFL teams my plans for playing pro football had failed. But not my steps. God never stops directing our steps. Though “many plans are in a man’s heart,” as Proverbs 19:21 says, we’re not clairvoyant. We don’t always know what’s best.