Developed by 100 scholars from 17 denominations, the Christian Standard Bible captures the Bible’s original meaning accurately without compromising readability, helping you experience the faithful and true Word of God.

Pastors trust its accuracy and faithfulness to the original languages. Christians young and old appreciate its readability and clarity. It’s a Bible you can preach from and a Bible you can give to a neighbor who’s never read God’s Word. The CSB is a translation for everyone. Discover the difference.

The CSB was created using Optimal Equivalence, a translation philosophy that balances contemporary English readability with linguistic precision of the original languages. In the many places throughout Scripture where a word-for-word rendering is clearly understandable, a literal translation is used. When a word-for-word rendering might obscure the meaning for a modern audience, a more dynamic translation is used. This process assures that both the words and thoughts contained in the original text are conveyed as accurately as possible for today’s readers.

On one hand, the CSB provides a highly accurate text for faithful sermon preparation and serious study, translated straight from the biblical languages by scholars who love God’s Word. It is impeccably faithful and true to the original. On the other hand, it does not compromise readability and clarity for those who may be less familiar with the traditional (and sometimes difficult) vocabulary retained in some translations of the Bible. The CSB has been proven to achieve fidelity to the original languages of the Bible without giving up clarity.

Seeking to provide Chinese-speaking people across the world with an accurate and understandable Bible in contemporary Chinese, Global Bible Initiative (formerly Asia Bible Society) researched all of the current Bible translations in English. Their in depth research shows the CSB is both highly literal to the original languages and highly readable, achieving an optimal balance of the two. 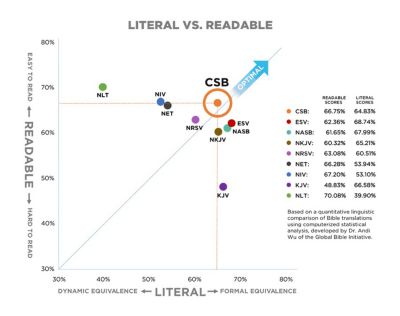 Some translations prioritize the form of the original text, while some prioritize its meaning in today’s language. The Christian Standard Bible, like the New International Version, resides in a mediating position on the continuum of Bible translations. You’ll find it to be highly trustworthy and deeply satisfying. 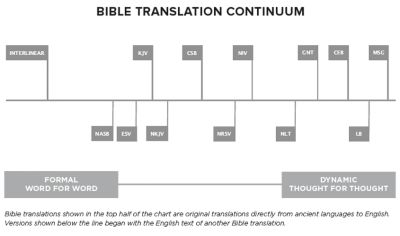 The CSB is featured in the following editions:

The Ancient Texts As They Were Meant To Be Understood

Developed by 100 scholars from 17 denominations, the Christian Standard Bible faithfully and accurately captures the Bible’s original meaning without compromising readability. The CSB is a trustworthy text for both sermon preparation and serious study, translated straight from the biblical languages by scholars who love God’s Word.
But the true measure of a Bible translation is not only superior scholarship. For a Bible translation to be trustworthy in modern English, it must faithfully communicate the authority and urgency understood by its original audience. Because the CSB is an original translation—not constrained by complex language structures or source text limitations of an earlier English Bible version—it expresses the meaning and beauty of the ancient texts with emotive power. Pastors and laypeople can feel confident sharing God’s Word, knowing its truth will be communicated with clarity.

History of the CSB

Over 20 years ago, a team of more than 100 top conservative scholars from 17 denominations came together with one common vision: to create an original English translation meticulously faithful to the ancient Scriptures and exceptionally clear to understand. With the benefit of up-to-date manuscript discoveries and significant advances in research, these translators, reviewers, and stylists exhaustively scrutinized ancient source texts—including the critical Greek text favored by scholars—to determine every nuance of original meaning and intent. The result was a Bible that not only shines by academic standards, but is also remarkably enjoyable to read—the Holman Christian Standard Bible.

To ensure the very best balance of fidelity and clarity, top biblical scholars have reviewed the full text of the Holman Christian Standard Bible, based on feedback from pastors, seminaries, and other conservative denominations. Providing Bible readers with a translation that’s even more accurate and readable, this revision, called the Christian Standard Bible, will be available early in 2017 in a wide variety of editions.

The conservative, evangelical scholars of the Christian Standard Bible affirm the authority of Scripture as the inerrant Word of God. Seeking the highest level of faithfulness to the original and accuracy in their translation, these scholars and Lifeway, the non-profit ministry that stewards the HCSB, also champion the Bible against cultural trends that would compromise its truths.