Even the greatest dads fall short of the glory of God.

After college, I spent the next season of my life as a married man and father of two, trying desperately not to be like my father. I was determined not to repeat his silence. But it all came crashing down in an argument I had one day with Heidi. We were in the bedroom locked in a disagreement over something I have long since forgotten. Standing on opposite sides of the bed, the argument escalated. Expressing her justifiable frustration with me, she hurled these words, “You are just like your father.” I felt as if I had been stabbed by a dagger. I collapsed onto the bench at the foot of the bed. She was right. Somehow, despite my best efforts, I had been repeating my own father’s workaholic lifestyle and disconnection, the one I had hated. I too had become a workaholic. I had become obsessed with my growing success as a teacher and coach, spending hours on the job during the day and working hard at night to prepare for the next day. What little attention I paid to Heidi felt to her as if she were an interruption in my list or pressing tasks. I was left in massive upheaval. So many of the heroes I had tried to imitate had disappointed me. Now on top of that, I had become like the one man I had intentionally tried not to imitate. What was I to do with the mess I had made of my life? Who could straighten this wretched tangle?

I have to say here that my father is not an evil man, but someone with his own set of endearing qualities and character flaws. Having long since reconciled with him and now understanding some of his own story, I know that he was caught in his own set of entanglements. He was trying to do the best that he could and failing along the way. He too was the product of a silent father and was just passing on what he had been given. I have grown to love him in his later years, but I now know that he could never give what I so terribly needed during my formative years.

The Scriptures lend credence to the power of fathers in a remarkable verse that closes the Old Testament. It is a prophecy of the Messiah and the redemption he will inaugurate. How will He stop the spread of sin’s curse? How will He make everything right again? Here’s how: He will stop fathers and sons from running away from each other and start turning their hearts toward each other. This is the undoing of the curse. But when that healing work is refused, the destruction continues.

“And he will turn the hearts of fathers to their children and the hearts of children to their fathers, lest I come and strike the land with a decree of utter destruction” (Malachi 4:6 ESV).

Yet I see that healing work in the good fathers I know who have turned their hearts toward their sons. The fire is being lit. The glory is being caught. On a camping trip with some fathers and sons, I pulled one of the boys aside and told him I thought he had hit the lottery when it came to fathers. He responded by looking at me with eyes shining with love for his father. He didn’t have to say anything. I could see the glow. I had watched his father constantly engage and affirm him on the trip. The son felt so safe in his father’s love. Despite the fact that we were in the middle of the untamed Colorado wilderness over 10,000 feet in elevation, he feared no danger with his father nearby. Come bears or storms or snow, it didn’t matter. All was well with his father there.

I think the greatest compliment a son could ever give his father is this: “You are my hero.” The father has loved his son well, and the son has received that love well. The turning has begun. But even the best of fathers is still a sinner. Even the greatest of dads fall short of the glory of God. The heroic gleam is dim at best. The son may warm himself in that fire for a while, but at some point, he will have to navigate his own way forward in a world where confusion and disappointment seem to have the upper hand. The father cannot protect his son from all evil, much less the evil in the son’s own soul. Only God can protect and keep his son.

Bill Delvaux is a graduate of Duke University and Trinity Evangelical Divinity School. He has been a church planter, a high school Bible teacher, and a running coach. Six years ago, he pioneered Landmark Journey Ministries to help men connect their stories to God’s story through retreats and spiritual direction. His greatest claim to fame is being married to Heidi for thirty-two years and having two amazing daughters, Abigail and Rachel. He and his wife currently reside in Franklin, TN.

How to Study the Bible with Your Kids

As a parent, it can be overwhelming to think about sharing God's Word with your kids. After all, the Bible is the most important book you will ever read and study with your family. Here are 8 practical tips that will help you know how to study the Bible with your kids.

How to Cultivate Excellence in Education

Schools that partner with families and communities to support children are more likely to produce flourishing students. However, as we move beyond these basic tenets, there are many things we can rethink in education.

Teachers are the primary source of information for parents. However, many times misunderstandings impede effective communication and can erode that vital trust. I can't speak for teachers everywhere, but there are a number of things that teachers wish parents knew about school. 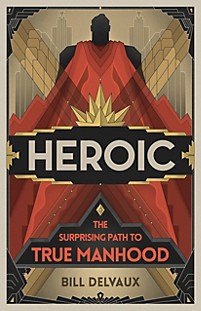 If you are struggling in fatherhood, or worry about repeating the same mistakes your father or his father did, we all have a perfect, loving father in God. Heroic: The Surprising Path to True Manhood by Bill Delvaux examines how God can lead us into becoming true men and fathers.