4 Facts About Jesus and the Future

Jesus spoke a lot about the future—your future.

Everyone has a theory.

I'm not just talking about radio and television talk shows, books, magazines and hundreds of websites. We hear so many voices. So many arguments. So many speculations. All of these are pushing some slant on futuristic issues—and of course, their slants vary widely depending upon who's pushing them.

So how do we sort through all of this? How do we decide what to believe about the future? I'd like to suggest there is one slant we ought to trust above all other slants.

Jesus Talked A Lot About the Future ... Your Future

Amid the thousands of shrill voices screaming for our attention, there is but one voice we need to hear—the voice of the Lord Jesus Christ.

The future did not trouble Jesus, nor was He preoccupied with what might happen. The Gospels make it clear that Jesus, more than anyone else who ever walked this planet, knew what the future held, both for Himself personally and for the world at large. We can confidently make four claims about Jesus' relationship to the future.

1. Jesus often referred to the future.

Jesus frequently spoke of future events. In Matthew 24, Jesus laid out a vision of events to come and concluded by saying to His disciples:

"Take note: I have told you in advance."

He wanted them to know facts ahead of time to help them (and us) face the coming days. Jesus was in the habit of preparing us for the future even during His days upon this earth. So don't let anyone tell you that Jesus didn't bother about the future. The facts speak otherwise.

At the end of the vitally important 16th chapter of John, Jesus says to His disciples, "I have told you these things so that in Me you may have peace. You will have suffering in this world. Be courageous! I have conquered the world" (John 16:33).

2. Jesus rebuked people for not knowing about the future.

Jesus not only spoke many times about the future but also rebuked the people because they didn't seem to recognize that important prophesied events were taking place all around them. He once scolded a crowd:

It was no small thing to Jesus that the people of His generation remained ignorant of God's prophetic Word. He expected them to be able to open their eyes, look around and put two and two together ... but they hadn't even learned their numbers.

The Bible instructs us to always be looking for the day of Christ's return, not with wild-eyed speculations but with sober and Spirit-led discernment. What else would Hebrews 10:24-25 mean? "And let us be concerned about one another in order to promote love and good works, not staying away from our worship meetings, as some habitually do, but encouraging each other, and all the more as you see the day drawing near" (Heb. 10:24-25).

How can we "see the day drawing near" if we aren't even looking for it?

We are to investigate what the Bible has to say and ask God to help us determine the day and the hour in which we live. We cannot remain ignorant of the signs of the times simply because thoughts of the future may make us uncomfortable.

A pastor friend of mine once asked if I was continuing to study prophecy and preach on it.

"You know what, Jeremiah?" he said. "I've come to the conclusion that prophecy just isn't relevant to our day. It doesn't have anything to do with where people are today in their contemporary situations. People have so many needs and so many hurts—it seems a shame to spend time showing them prophecy charts and talking about the future and all of that."

Such wisdom may sound good and prudent and practical, but it ignores one enormous fact: every time Jesus talked about the future, He connected it to the present. The prophecies of the New Testament are constantly undergirded with strong encouragements and admonitions about how we are to live today.

I canvassed the New Testament and was reminded again of how the Lord used truth about the future to encourage and instruct His disciples about their present-day lives. For example, consider John 14:1-3: "Your heart must not be troubled. Believe in God; believe also in Me. In My Father's house are many dwelling places; if not, I would have told you. I am going away to prepare a place for you. If I go away and prepare a place for you, I will come back and receive you to Myself, so that where I am you may be also."

Jesus connects His ascension and return—both future events at the time He spoke those words—to His disciples' present-day experience of peace. He believed that by telling His followers what lay in the future, they would be strengthened to live more vibrantly in the present.

The days are coming when the hand of God will move across this globe in catastrophic ways. If we know the Word of God, we won't be taken by surprise. We won't find ourselves in a panic or gripped by sudden apprehensions.

I can't get excited about any teaching that inspires concern about future events but ignores what God wants us to do today. My study of prophecy convinces me that God intends knowledge of future events to help us occupy with a sense of urgency until the Lord returns.

4. Jesus revealed the future so His disciples would rest in Him.

When you don't know how everything is going to work out, you have to hold tightly to the Lord God and trust in Him. We're told to rest in the Lord. That is the message we find throughout the New Testament.

Throughout John 16, Jesus talks about the future and what is about to happen. He warns His disciples about His imminent death; the persecution to come; and the sorrow, pain, and hardship lying just ahead. But after predicting all these frightful events, He commands them to place their trust wholly in Him.

For Christ-followers, the story of "the end" is not one that has to be feared. In fact, you could actually look forward with great anticipation to the end of this world that will usher in a new day, a new Earth and a new life. 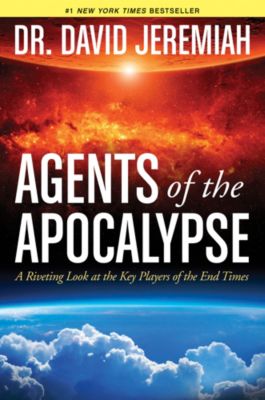 Agents of the Apocalypse: Are we living in the end times? Is it possible that the players depicted in the book of Revelation could be out in force today? And if they are, would you know how to recognize them? In Agents of the Apocalypse, noted prophecy expert Dr. David Jeremiah does what no prophecy expert has done before. He explores the book of Revelation through the lens of its major players-the exiled, the martyrs, the elders, the victor, the king, the judge, the 144,000, the witnesses, the false prophet, and the beast.

One by one, Dr. Jeremiah delves into their individual personalities and motives, and the role that each plays in biblical prophecy. Then he provides readers with the critical clues and information needed to recognize their presence and power in the world today.

Nothing brightens life like the spirit of thanksgiving. Here are some simple reminders to show your thanks and praise to God.

What Are You Afraid Of?

Our fears are intricately connected with our deeper selves — our values, desires, and dreams. So evaluating what we're afraid of is a great way to learn more about who we really are.