The Importance of Consequences for Your Son

When we rescue our sons from the consequences of their actions and mistakes, we hinder their progress in the journey to manhood.

When we rescue our sons from consequences, we hinder them from becoming men and encourage them to behave like little mama’s boys indefinitely. Part of becoming a man is learning to accept responsibility for irresponsible actions and mistakes, learn from the experiences, and correct the behaviors before they become a habit or pattern.

In order to develop a healthy masculinity, boys will attempt to break away from their mothers at various stages in the growing-up journey. This is a natural occurrence that if stifled can inhibit their quest to become men. Moms who hold tightly to their boys or, worse yet, come to their rescue every time they face consequences from mistakes or irresponsible actions will breed a sense of prolonged dependency in their sons. And if there was ever a mom to come to the rescue, it’s the helicopter mom. You’ve seen her before. She’s the one zipping into a parking lot at the school, jogging into the school with a leap and bound as she delivers little Johnny’s lunch to the office. Again. For the third time this month. With a sweet note written on little Johnny’s napkin because that’s what helicopter moms do. They rescue their sons from negative consequences because negative consequences are unpleasant.

A Time article described one elementary school principal in Kansas who got so fed up with parents rescuing their children, she established a “no rescue” policy. Her breaking point came when she noticed the front-office table covered day after day with forgotten lunch boxes and notebooks, all brought in by parents. Gulp. Guilty as charged. I pulled the mom-to-the-rescue stunt more times than I’m ashamed to admit. My breakthrough finally came on my third trip in one week to the local middle school. This time I was delivering an assignment my son left behind when all of a sudden I realized there was greater value in allowing him to suffer the consequences rather than rescue him yet again and reinforce the pattern of irresponsibility.

In the book That’s My Son, author Rick Johnson warns:

By running too quickly to rescue their sons when things get tough, some moms are teaching their boys that the way out of hard times is to find someone to get them off the hook rather than to be accountable to the one in authority and step up to the plate. This can set patterns for boys’ entire lives. A boy who avoids accountability becomes a man who is answerable to no one—a recipe for disaster.

When we rescue our sons from the consequences of their irresponsible actions and mistakes, we actually hinder their progress in the journey to manhood. Let me put it to you in a more sobering fashion: When we rescue our sons from consequences, we hinder them from becoming men and encourage them to behave like little mama’s boys indefinitely. Part of becoming a man is learning to accept responsibility for irresponsible actions and mistakes, learn from the experiences, and correct the behaviors before they become a habit or pattern.

I am not suggesting we have a zero-tolerance policy for mistakes and run our homes like a military boot camp. Everyone makes mistakes, and we’ve all been in need of a rescue from time to time. I recall an assignment my son failed to bring to school in his junior year of high school. His cumulative GPA was right on the borderline of what he needed in order to qualify for college academic scholarships. A simple ten-point grade deduction on a late assignment can serve as a punishment of sorts to me and my husband if it means missed opportunities in the way of scholarships. I made an exception but made my son do the dishes when he came home, so he didn’t escape without consequences.

These words that I am giving you today are to be in your heart. Repeat them to your children. Talk about them when you sit in your house and when you walk along the road, when you lie down and when you get up. (Deuteronomy 6:7)

If we are to help our sons become men, we must be willing to employ some tough-love parenting tactics along the way. We do them no favors when we rush to their rescue time and time again and allow them to escape without consequences. Mothers who establish this pattern will be rescuing their boys for many years to come. A friend of mine recently told me about a mother from her church who sent out a church-wide e-mail soliciting employment for her grown son, who was in his thirties. My friend was appalled, as well she should be. Further, the mother attached her son’s résumé and gave her e-mail address as the contact, stating she would pass along any job leads to him since he lived at home.

This lady isn’t a mother; she’s an unpaid personal assistant! It’s time for mama to cut the apron strings and let her adult-aged son grow up and become a real man. This clearly isn’t the first time this mom has come to her son’s rescue. It probably began with a lunch that was left behind, followed by the gym clothes, a few school projects, another lunch or two, and the list goes on and on. Resist the urge to rescue your son from unpleasant consequences. If you don’t, you just may find yourself working as a full-time, unpaid assistant for decades to come while your son faithfully puts in overtime on your living room sofa with a game controller in hand. Energy drinks and buffalo wings included. On your dime.

Excerpted with permission from 5 Conversations You Must Have with Your Son, Revised and Expanded Edition by Vicki Courtney. Copyright 2019, B&H Publishing Group.

Vicki Courtney is a speaker and the best-selling author of numerous books and Bible studies including, Rest Assured, Move On, Ever After, 5 Conversations You Must Have With Your Daughter, and 5 Conversations You Must Have With Your Son. She is the recipient of a Mom's Choice award and a two-time ECPA Christian Book Award winner. More info can be found at VickiCourtney.com 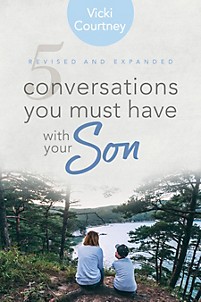 For mothers with boys newborn to eighteen, 5 Conversations You Must Have with Your Son, Revised and Expanded Edition is simply a must-have book. Award-winning youth culture commentator Vicki Courtney helps moms and dads pinpoint and prepare the discussions that should be ongoing in a boy’s formative years. The book also includes questions at the end of each conversation to help facilitate individual or group study.

5 Ways Your Family Can Focus on Others this Christmas

Author Lori Lee explains why Christmas is the perfect time to be "global in your local" and to extend a helping hand and heart to others.

Cultivating a Heart of Gratitude

Thankfulness is stopping long enough to say it or show it and making sure you pause in your busy day to receive it. In abundance, being thankful is an act of beauty, and acknowledging and appreciating the gifts in your life makes you want to give them away..

Instead of bracing yourself for long hours of travel confinement with restless children on Thanksgiving trips, take the opportunity to teach your children the importance of giving thanks.

Give Thanks This Thanksgiving

Thanksgiving is an opportunity for parents to move beyond traditions and teach children about thankfulness. Try thes practical ideas this holiday season.

5 Conversations You Must Have with Your Son, Revised and Expanded Edition by Vicki Courtney helps parents find a path forward as they raise their sons from boys to men