Make the Most of Your Days as a Follower of Christ

How can you live intentionally as you wait for Christ's return?

There are countless ways to spend, invest, or waste time. The Bible isn’t silent about time management and living with intentionality. We can look to Jesus as a model for living with laser-like focus.

The writer, Annie Dillard, said, “How we spend our days is, of course, how we spend our lives.” We live in an era where there are countless ways to spend, invest, or waste time. If we aren’t careful, there’s a good chance we’ll fail to get the most out of our days. The Bible isn’t silent about time management and has much to say about living with intentionality. Jesus was the Master Teacher, and He modeled what it looked like to live with laser-like focus.

As Calvary loomed, Jesus knew the time He had left with His disciples was limited. They’d given up everything to follow Him, and for three years, they’d walked shoulder to shoulder with Jesus, learning what it meant to be His disciples. Still, they were unsure about what was coming. Jesus knew their world was going to be shattered, and He wanted to prepare them for not only what was coming but how to live prepared after He was gone. So on the brink of Jesus’ departure, He taught His disciples how to be ready for His return.

During the last days of His earthly ministry, Jesus reflected on how He’d spent His time on earth. In the High Priestly Prayer, Jesus prayed to the Father, saying: “I have glorified you on the earth by completing the work you gave me to do” (John 17:4). As Jesus retraced His steps, He could say with confidence He’d been obedient to the Father and completed the work He’d been given to do.

"Do we want to be people who live with intentionality motivated by our love for God, or be people who are condemned for our laziness?"

Eventually, all of us will face a similar scenario. Our time in this world will come to an end. It will either arrive by way of death or Christ’s second coming—whichever comes first. At that point, it will be too late to rethink our priorities. How we live during this life has ramifications that will impact us for eternity, so it’s crucial we’re mindful of that reality. Jesus knew this was the case, and so it was a topic He taught on during the last week of His ministry. In Matthew 25, we find teaching that speaks to living with intentionality and being prepared for Christ’s return. It’s a message that’s just as relevant today as when Jesus taught it to His disciples during Passion Week.

"At that time the kingdom of heaven will be like ten virgins[a] who took their lamps and went out to meet the groom. Five of them were foolish and five were wise. When the foolish took their lamps, they didn’t take oil with them; but the wise ones took oil in their flasks with their lamps. When the groom was delayed, they all became drowsy and fell asleep. In the middle of the night there was a shout: ‘Here’s the groom! Come out to meet him. Then all the virgins got up and trimmed their lamps. The foolish ones said to the wise ones, ‘Give us some of your oil, because our lamps are going out.’

"The wise ones answered, ‘No, there won’t be enough for us and for you. Go instead to those who sell oil, and buy some for yourselves.’ When they had gone to buy some, the groom arrived, and those who were ready went in with him to the wedding banquet, and the door was shut. Later the rest of the virgins also came and said, ‘Master, master, open up for us!’ He replied, ‘Truly I tell you, I don’t know you!’ Therefore be alert, because you don’t know either the day or the hour."

What is the lesson in this parable and how does it apply to your life?

Jesus told the story of ten virgins, who are similar to bridesmaids in a wedding, awaiting the arrival of the groom. Five of the women came prepared with enough oil in their lamps, but the other five were caught off guard and unprepared. As a result, the latter group was denied entrance into the wedding banquet (v. 12). It’s obvious then, that the kingdom of God is not for those who merely respond to an invitation. All ten of the bridesmaids had responded to the invitation, but five of them didn’t persevere.

In the same way, we often see people respond to an invitation to follow Jesus, but after time passes, they fall away. Maybe at some point they even felt genuine affection for Christ, but they were never truly His. They lacked the faith to stay the course. The Bible teaches that saving faith perseveres to the end (Matt. 24:12-13; Mark 4:16-19; Heb. 3:14).

"For it is just like a man about to go on a journey. He called his own servants and entrusted his possessions to them. To one he gave five talents,[d] to another two talents, and to another one talent, depending on each one’s ability. Then he went on a journey. Immediately the man who had received five talents went, put them to work, and earned five more. In the same way the man with two earned two more. But the man who had received one talent went off, dug a hole in the ground, and hid his master’s money. After a long time the master of those servants came and settled accounts with them. The man who had received five talents approached, presented five more talents, and said, ‘Master, you gave me five talents. See, I’ve earned five more talents.’ His master said to him, ‘Well done, good and faithful servant! You were faithful over a few things; I will put you in charge of many things. Share your master’s joy.’

“The man who had received one talent also approached and said, ‘Master, I know you. You’re a harsh man, reaping where you haven’t sown and gathering where you haven’t scattered seed. So I was afraid and went off and hid your talent in the ground. See, you have what is yours.’ His master replied to him, ‘You evil, lazy servant! If you knew that I reap where I haven’t sown and gather where I haven’t scattered, then you should have deposited my money with the bankers, and I would have received my money back with interest when I returned. So take the talent from him and give it to the one who has ten talents. For to everyone who has, more will be given, and he will have more than enough. But from the one who does not have, even what he has will be taken away from him. And throw this good-for-nothing servant into the outer darkness, where there will be weeping and gnashing of teeth.’"

What’s the message here for how we are to live as followers of Christ?

In the parable of the talents, Jesus spoke of three servants who were entrusted with specific talents from their master. During the master’s absence, one of the servants invested his five talents and earned five more. Likewise, the man possessing two talents invested his talents and earned two more. But the third man found no joy in serving his master and thought him to be difficult, so he buried his only talent and got nothing in return. Because of the third man’s lack of faith, and unwillingness to maximize what he’d been entrusted, the master took the servant’s only talent and gave it to the man who had ten talents (v. 28).

A close look at the text reveals the third man’s attitude toward his master impacted how he stewarded his resources. He had no love or reverence for his master, and so he was lazy with the resources his master entrusted to him. To be sure, our salvation is by grace through faith, and it can’t be earned by works (Eph. 2:8-9). However, if our faith is genuine, we will be good stewards of what God has entrusted to us as an expression of our love for Him. This parable begs the question: Do we want to be people who live with intentionality motivated by our love for God, or be people who are condemned for our laziness?

How are you using the gifts, talents, and skills God has given you to honor Him and move His kingdom forward?

As Christians everywhere honor Christ’s death and celebrate the resurrection, we would do well to remember first and foremost His holy command, that we love one another. While Good Friday and Resurrection Sunday garnish the lion share of our attention, bypassing Maundy Thursday, we miss something that matters. Love.

Easter is an important time to point the children in our lives to the gospel story. With these fun and meaningful Easter gift ideas, you can surround them with the truth found in God’s Word as you fill their Easter baskets or send a special treat their way.

How Well Do You Know God?

God wants you to know Him personally and to experience His presence in your life. We can know God through His Word, experience Him in His creation, and even see glimpses of Him in other believers, but the time to meet Him face to face hasn’t come yet.

Jesus Came to Give Us Life

Easter tells us that the pain that so ravages people will one day give way to full and final healing for those who believe. There is hope for those who suffer. God has visited us in our pain and Jesus has defeated the ugly death that haunts the human experience. 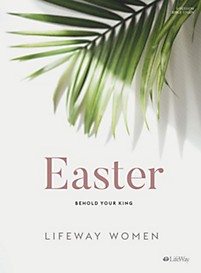 Easter: Behold Your King is a thoughtful look at the Easter season, focusing on the events and deeper theological meaning of the Passion Week. This study will not only help you understand how beautifully deep Christ’s sacrifice for us was, but also how to live in light of these life-giving truths.

Includes Easter activities to help kids, students, and adults celebrate the season together.

Read the first session of the Bible study, Easter: Behold Your King.