How Should the Greatness of God Impact Our Lives?

God not only has dominion but He also has the authority to exercise it.

When trying to remain anchored to the faith that describes God as being full of glory, the King of kings, with all power and authority in His hand, while at the same time defending these same truths to others who are denying Him how should the eternal nature of God’s character encourage and challenge you?

The greatness of God speaks to His absolute rule over all things. His endless resources. His unimaginable power to do as He pleases and for whomever He pleases. He is King of all, even of those who would deny (v. 4) the One who upholds the universe with the word of His power (Heb 1:3).

When people enter into the presence of a royal, who has but a fraction of the majesty that God has, they are expected to bow—out of honor. The majestic one whom they stand in front of inspires awe and reverence. But this God, our Savior, is the true King and the only God. He dwells in unapproachable light (1 Tim. 6:16). He sits on a throne, surrounded by creatures that live to give Him glory. We haven’t even scratched the surface of understanding the majestic nature of God. But with the little knowledge we do have, we join Jude’s praise by saying, “To the only God, ... be majesty” (v. 25)!

To say God has dominion is to say God has power (see Isaiah 40:9-26). How would you take what Isaiah said about God and use it to explain His might or power?

And Mary said, “My soul magnifies the Lord, and my spirit rejoices in God my Savior, for he has looked on the humble estate of his servant. For behold, from now on all generations will call me blessed; for he who is mighty has done great things for me, and holy is his name. And his mercy is for those who fear him from generation to generation. He has shown strength with his arm; he has scattered the proud in the thoughts of their hearts; he has brought down the mighty from their thrones and exalted those of humble estate; he has filled the hungry with good things, and the rich he has sent away empty. He has helped his servant Israel, in remembrance of his mercy, as he spoke to our fathers, to Abraham and to his offspring forever.”

How would you take what Mary said about God and use it to explain His might or power?

God not only has dominion but He also has the authority to exercise it. His authority to do a particular thing is in partnership with His ability (power) to do it.

The God Jude was praising is One who has the dominion to do whatever He pleases and the right to do whatever He pleases. And unlike many of the men and women who have received a measure of authority and power and used it to serve themselves, such as presidents, kings, bosses, parents, CEOs, police officers, church pastors, and leaders (Jude 12), God has continually used His power and authority to serve others (Matt. 20:28).

Have this mind among yourselves, which is yours in Christ Jesus, who, though he was in the form of God, did not count equality with God a thing to be grasped, but emptied himself, by taking the form of a servant, being born in the likeness of men. And being found in human form, he humbled himself by becoming obedient to the point of death, even death on a cross.

While contending for the faith in a world that might not look like it’s in subjection to God (Heb. 2:8)...

When trying to keep yourself from the lie that what God has made is more glorious than Him...

When being tempted to bow down to lesser kings...

When wondering if God is still in control and if He still has the power to keep the godly and judge the ungodly...

When trying to remain anchored to the faith that describes God as being full of glory, the King of kings, with all power and authority in His hand, while at the same time defending these same truths to others who are denying Him...

...how should the eternal nature of God’s character encourage and challenge you?

To the only God, our Savior, through Jesus Christ our Lord, be glory, majesty, dominion, and authority, before all time and now and forever.

Excerpted from Jude: Contending for the Faith in Today's Culture by Jackie Hill Perry. Published by Lifeway Press®. © 2019. Used by permission.

Jackie Hill Perry is a Bible teacher, writer, and artist. She is the author of Gay Girl, Good God: The Story of Who I Was, and Who God Has Always Been and the Bible study, Jude: Contending for the Faith in Today's Culture. At home she is known as wife to Preston and Mommy to Eden and Autumn.

While often overlooked, the Book of Jude remains as relevant today as the time it was written. God has commanded His beloved church to do the necessary work of contending for the faith in a world of unbelief, and as we do, He will keep us from falling into the same deception.

In Jude, a 7-session study from Jackie Hill Perry, dive into themes of being called, loved, and kept, and learn how to point others to Jesus in grace and truth. We serve others well when we share the whole gospel with them, not just the parts deemed attractive by our culture.

View a free sample of the first session of Jude.

The God Who Created You Wants All of You

He doesn’t want your acts of service, your money, or your time as much as He wants you.

9 Facts About Heaven that Will Surprise You

In heaven, we'll embrace God's holiness and justice. God will be our source of joy. But will we miss things from earth? Will we become angels? Will we work? Author Randy Alcorn answers some of the common questions we all have about heaven. 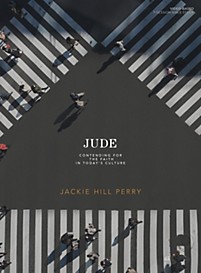 Jude, a 7-session Bible study by Jackie Hill Perry, looks at God's greatness, His gospel, and how it helps us stand for the faith in our culture.