Mentors help remind us who we are, who God intends us to be, and that He will be faithful to us. And a mentee is someone who longs to know it. It is the combination of those two powerful forces together that create fulfillment.

One day when Shelley Giglio was in the sixth grade, she couldn’t find her mother. She called for her around the house and grew more and more frustrated. Finally, she opened the door to her parents’ bedroom.

“On the opposite side of my parents’ bed, face down, was my mom. She had her Bible open in front of her, and she was literally prostrate on the ground.”

Shelley never got over it.

"I can remember that — like it is emblazoned on my heart,” she says. “All of the things I knew our family ascribed to or believed in came roaring into authenticity in that moment.”

Shelley realized that more than being a good parent and leader of their family, her mother wanted to be a good follower of Jesus.

“In a single snapshot in my mind, I saw the connection, and that connection changed me. All the way to today — it has changed me.”

“We want to be prostrate, literally, before God and say to Him, ‘I want You to teach me who to be, not just for my own sake, but so I can turn and look at the generation behind me and say: You can follow this path. It’s a trustworthy path.’”

Shelley and her husband, Louie, planted Passion City Church in Atlanta and founded Passion Conference, which has impacted millions of young people since 1997. Shelley also leads a monthly gathering for women at Passion City Church called The Grove. Everything the Passion Movement does aims to point their neighborhood and the world toward one name — Jesus.

Mentors help remind us who we are, who God intends us to be, and that He will be faithful to us. And a mentee is someone who longs to know it.

Rooted in the Word

Six years ago when Passion City Church was four years old, Shelley saw that the women were disconnected. She looked harder at her role and how she could create an opportunity to guide growth and build accountability among women of the church. To this end, Shelley and her team developed Flourish — a year-long mentoring journey based entirely on Scripture in partnership with Passion City.

“I started with a heart of really wanting women to be raised up into who God intends for them to be. It felt like the best way to do this was to pair each of these women with someone who is slightly ahead of them on their journey with God and encourage these pairs toward conversation and studying Scripture,” she says.

Flourish calls women to a higher standard of living — a decision to live rooted in the Word of God and the love of Jesus. It’s built around the belief that to truly flourish, women need to minister cross-generationally to one another. The study helps mentors and mentees dig into God’s Word to better understand God’s truth and love.

“Scripture describes people’s lives that flourish in every season, so they don’t just have fruit for a while. We don’t want to kind of look like a vine, but not produce anything. Instead, there’s the possibility our entire lifetime could produce fruit.”

As her team has led more than 3,500 women through this mentoring journey at Passion City Church, Shelley is continually praising God for the impact.

“It has been a game-changer,” she says. “We create this strength within our House that is unmovable, that is prayerful, that is trusting God with not just small things, but with huge things. That’s become the force. That’s what we’ve watched God do. Yes, we benefit individually, but we also benefit the Church at large, and that is such a gift.”

Flourish covers six thematic sessions, diving deeper into topics of God’s Word, prayer, identity, calling, kinship, and gratitude. It emphasizes Biblical community and invites participants to consider how their own stories fit into the larger redemption story God is writing.

“I wanted to be sure we weren’t just tapping into ideas or common culture or even ‘right thinking,’ but we were tapping into power,” Shelley said. “That power is only found in the person of Jesus and in the Word that He says is true. And that’s why Flourish is named Flourish, and that’s why Scripture is there for our life. We want to be tapping into that.”

“This is trying to create a year-long process of discipline, of understanding, of growth, so that honestly, you don’t stop after a year. You feel like, ‘This has helped me so much I can’t imagine ever having a year without it,’” she says. “The goal is to get something inside of you that will never be taken away.”

Shelley understands not wanting to feel pressured by anyone’s expectations or needs. “There’s a missing element of accountability in our culture today, and I’m not speaking about the younger culture, I’m speaking about myself. I, too, have moments where I just want to kind of float through life.”

The mentor is a person who knows God has brought her through and has a desire to say to other people, ‘God will be faithful to you too.’ It’s that simple.

But floating lacks purpose. Shelley believes we need healthy accountability to stay focused, and through this mentoring journey, women are discovering that what seems will confine them actually sets them free to grow.

“What helps us live successfully is having those boundaries that God puts in our lives and the recommended paths He tells us to take. When we acquiesce to the accountability of that process, it propels us. It doesn’t limit us. It propels us on to what God wants for our lives.”

Shelley says she longed for that kind of guidance and accountability 35 years ago when she and Louie were starting out in ministry. She had experienced great mentoring in her career and in life but not in the church.

“Where it felt natural to me in business, it didn’t always feel natural in spiritual things. I think partially it’s because mentors never feel prepared enough like, ‘I’m still learning. What would I tell you?’ and, ‘I don’t know everything.’”

For that, she has a comically rational response, “Well, neither do business mentors Mentoring isn’t about knowing everything; it’s a willingness to share what you do know and have experienced and really just point people toward something greater than you.”

To help mentors embrace their role, Flourish provides extensive leadership guidance to make the journey practical and simple, as well as specific goals and leader tips for each session. There’s also a mentoring website (FlourishMentor.com), with tools, coaching videos, and resources.

“When I talk to mentors who are scared or nervous about being a mentor, I always say, ‘Lower the walls because people aren’t expecting perfection. They’re expecting experience,’” Shelley says.

Mentoring isn’t about knowing everything; it’s a willingness to share what you do know and have experienced and really just point people toward something greater than you.

In essence, choose to be helpful over being perfect, and don’t complicate it.

“The mentor is a person who knows God has brought her through and has a desire to say to other people, ‘God will be faithful to you too.’ It’s that simple.”

As far as mentees are concerned, some of the most eager groups Shelley encounters are new mothers looking for guidance. Many of them are desperate to know that God will be faithful to their families in a season where they feel unprepared and ill-equipped.

She shares about a recent meeting with a mom of two young girls, ages four and two, who feels outmatched and overwhelmed — and not just with the physical demands.

“It’s the stewardship that she feels is heavy — how to grow these little hearts into people who love God — and I think something like Flourish helps people get there. So, that’s part of why I believe in it so much.”

Shelley knows there are more young women who need spiritual mothers to help them understand who God is, how to trust Him more, and to believe that they’re loved. Such growth is fostered in the rich soil of a mentoring relationship.

“Mentors help remind us who we are, who God intends us to be, and that He will be faithful to us. And a mentee is someone who longs to know it,” Shelley says. “It’s the combination of those two powerful forces together that create fulfillment.”

Now that Passion City Church is releasing this unique resource to churches worldwide, Shelley hopes Flourish will help more women create strong, fulfilling relationships as they dig into understanding God’s love together through His Word; that more daughters will witness their moms falling before God; that more older women will exemplify His goodness; and that more churches and communities will be strengthened as a result.

“It’s a book that establishes, ‘This is what God says, and this soil, these nutrients are good. They’re generationally good. And if you put your life down into that soil — even when you’re my age and further — you will have fruit on the vine. You will actually be able to provide and give to people in ways you never fathomed you would be able to.’”

This article is adapted from HomeLife Magazine.

Courtney Keen specializes in nonprofit communications, with a soft spot for underdogs, ordinaries, and the overlooked. She has reported on international humanitarian efforts in places like Myanmar, Vanuatu and most notably, Nepal, after the major earthquakes of 2015. 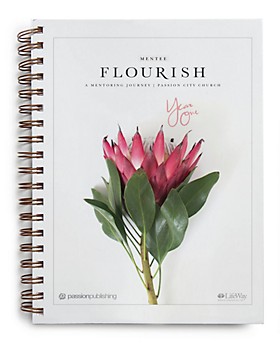 The most important decisions we can make are about who we are and who we are becoming.

Flourish calls women to a higher standard of living: a decision to live a life rooted in the Word of God and the love of Jesus. Such growth is fostered in the rich soil of a mentoring relationship. God created us to be in community with other believers because He knew we couldn’t do life alone. To flourish, women benefit from the encouragement of mentors: those who have gone before us and reflect Jesus.

Kelly Minter is an author, speaker, songwriter, and singer passionate about women discovering Jesus Christ through the pages of Scripture. Whether it’s through a song, study, or spoken word, Kelly’s desire is to authentically express Christ to the women of this generation.

Lifeway's top-selling women’s Bible studies of 2020 include a variety of topics from hearing God’s voice to making a new start and finding Sabbath rest as well as exploring books of the Bible, including Genesis and the Gospel of John. Read on to see what God may be guiding you to study.

What Are the Eight Signposts of Discipleship?

Bible study leaders want to do more than simply teach the Bible. We lead our groups because we want to see people transformed by the truths of God’s Word. We want those in our groups to grow in their faith and walk with Christ.

Flourish is a year-long mentoring journey aimed to help women become who they want to become.