God is a Good, Good Father

If your earthly father was absent or abusive, God can restore your brokenness.

You’re a child of the Most-High God. God will never waste a tear, and He has the power to restore every shattered situation. It’s in the middle of your greatest pain where God wants to meet with you.

Father, a six-letter word that provokes so many different thoughts and emotions. For some, the word brings memories of a male figure who has always been present, a man you can always count on to bring comfort, support, and protection. For others, this six-letter word carries a negative connotation. Thoughts go to abuse faced at the hands of the one who was supposed to love and protect you. And to others, the word father equals absence.

If you fall into the latter categories, you’re not alone. There is a crisis in America, and it has to do with fatherless homes.

The Attempt to Destroy

God has a desire for the family, and the enemy has been attacking that very thing. Satan knows that if he can destroy the family it will affect society and begin a cycle that is hard to break. According to the United States Census Bureau, 18.4 million children live without a biological, adoptive, or stepfather in the home.

When children are raised in a home where the father is absent, they are:

This is not God’s will. These are real problems with real effects — effects that I know very well.

The Abandoned But Not Forgotten

At an early age, my days were filled with my drunken father beating my mother. I watched night after night as this took place. I felt so defeated and helpless.

All I could do as a little boy was watch and cry. The sounds of my mother’s cries, dishes shattering against the wall, and my father’s drunken slurs are sounds I will never forget. As I watched, I remember thinking, I can’t wait until I get old enough to protect my mom. My father became the villain. He was the man I wanted to protect my mother from, the man whose approval I desperately wanted but whose image I wanted nothing to do with.

I was too young to know what I know now, but my father was continuing a generational cycle — a cycle that was attempting to mold me into its image. You see, I was next in line. I was the one who was supposed to carry this cycle and continue it for the generations to come and pass it on to my children. But that didn’t happen. My mother would make a generation-saving decision. She decided she wouldn’t take any more of the abuse and separated from my father.

My parents’ separation led to a divorce with a court order that would give my father weekend visitation rights. Each Friday, my mother would drop me off at my grandmother’s home with the expectation that my father would pick me up for his weekend visitation. I waited eagerly each Friday, anticipating time with him. I remember climbing my grandmother’s patio fence peeking my head over, looking for his red van to pull up to the apartment complex. But he never came. Minutes turned into hours, hours turned into weeks, weeks to months, and months to years. I was devastated. I felt abandoned and unloved. I wondered why I wasn’t worthy of my father’s love. I was a little boy, a son, desperate for it. My soul begged for affirmation, protection, and male guidance, but it never came. I was left holding the pain.

The God Who Saves

As I continued to live life without a father, I experienced sexual, verbal, and physical abuse. My confidence and self-worth were shattered. My pain turned into bitterness, and my bitterness turned into anger. I was a renegade with no regard for the value of life. I was nothing more than the statistics I previously named. I fit the mold and was a menace to society. By the age of 18, I was involved in theft, drugs, alcohol, and sexual immorality. I didn’t care if I lived or died. My fatherless home left me a bitter young man with no guidance or direction. I was ashamed, broken, and hopeless. I felt like I was too damaged to be loved by anyone, much less God. When I heard God was like a father, it scared me. The only frame of reference I had for a father was the one who was abusive and never came back.

If my earthly father didn’t want me, why would God? I felt too damaged for God the Father to want me.

I didn’t picture God as this loving Father who wanted to lead me, guide me, forgive me, and never leave or forsake me. No, for me, God wasn’t someone who appealed to me. I assumed that if He were like a father, He would walk out on me too. I was left empty and hopeless. I questioned the point of living.

This thought process led to my suicide attempt. I wanted to end it all. Thankfully, I failed. But it was a wake-up call. See, the truth is, I didn’t want to die. I just wanted to be loved.

Several months after my suicide attempt, I attended a basketball ministry at the Salvation Army. As someone stood and shared the gospel, it was as if God took the veil off my eyes and I could see Him. I walked the aisle and prayed a simple prayer, God, I don’t know if You’re real, but if You are, take my life, and do whatever You want with it.

The Father Who Loves

If I am completely transparent, I wasn’t sure if God could use someone who had been molested, used and abused drugs, and indulged in sexual immorality. I didn’t know what He could do with me, but I knew I needed Him to be my Father.

I needed to be adopted. I was a spiritual orphan without any direction — a lost soul in need of a Savior.

My life completely changed. I’ve been married to my beautiful wife for 11 years. We have four beautiful children, and I’ve broken the cycle! I’ve broken the years and years of generational pain and abuse. Not to mention, I have a wonderful heavenly Father who will never leave me nor forsake me. He will never walk out on me.

The New Story to Be Written

Maybe your story isn’t quite as extreme as mine, but it doesn’t have to be to understand what it feels like to yearn for a father’s love. God wants to take every broken part of your life, whether it was caused by you or someone else, and reconstruct it.

You’re a child of the Most-High God. You’re never forsaken. God will never waste a tear, and He has the power to restore every shattered situation. It’s in the middle of your greatest pain where God wants to meet with you and speak to you. God wants to join you in that dark room that’s filled with pain and show you the way through the door of hope. To think that the God who created the heavens and the earth is the same God who desires to have a relationship with you and me is overwhelming — especially when He knows everything about us.

I believe God wants to restore and repair your soul. He wants to give you hope. He wants to be your Father. The truth is, even if you were raised with the best earthly father, it’s still amazing that the heavenly Father desires to walk intimately with you. Praise God for that truth!

Noe Garcia is the senior pastor at North Phoenix Baptist Church in Phoenix, Arizona. Noe holds a Doctorate of Ministry in Executive Leadership from The Southern Baptist Theological Seminary, and serves on the leadership council of the Ethics & Religious Liberty Commission. He and his wife have four children.

Stories can be delightfully and therapeutically subversive. When we are caught up in  one, we let our guard down, if just for a moment. That moment, however, is enough for desire to surface, for grief to sting, and for joy to envelop. We put down the story and feel strangely alive. The healing has begun.

How God the Father Shapes Us as Parents

Look to Jesus for Redemption

Jesus said holiness and right-standing before God cannot be achieved by our own strength. By all accounts, we are doomed. But the form of judgment is also the form of our salvation. 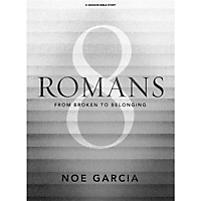 In this eight-session Bible study, author Noe Garcia takes you on a journey through Romans 8. Noe shares his life story and reveals how God redeemed, repaired, and restored him. You'll understand Christ’s transformative power to repurpose hurt and brokenness for your good and His glory.