God invites to His table those who were His enemies.

Today, we can get the news quickly and react just as quickly. We can thumb a few sentences and press send, immediately expressing our thoughts to thousands or perhaps millions of people around the world. This kind of power isn’t just available to celebrities and politicians. Anyone can post anything on a seemingly unlimited number of platforms.

In many ways, this is a welcome new reality. When a natural disaster strikes, relief and aid can be mobilized sooner. When there is a tragic death, online fundraisers can be created and money can be raised in mere hours. Missing persons can be located when millions of people spread the word. And, unlike previous generations when many voices were not part of a national conversation, the barrier to entry to speak, to write, and to mobilize are much lower. Movements can be created faster and more voices can be heard.

But the torrent of information coming at us combined with the ease of instant communication can also be damaging. And our instinct to be right, to be first, to be heard is one of the reasons we often make mistakes. Because we don’t wait before speaking, we allow confirmation bias and the Internet’s hive mind to keep us from wisely evaluating both what we are hearing and what we are communicating. Alan Jacobs says that our “instinct for consensus is magnified and intensified in our era because we deal daily with a wild torrent of what claims to be information but is often nonsense.”

We also don’t realize how much of this “nonsense” is a form of entertainment, an intoxicating theater of the absurd.

Senator Ben Sasse agrees that much of what passes for news and opinion is actually a form of entertainment, “Many of our television hosts are modern-day carnival barkers. We can get dopamine, adrenaline, and oxytocin all at once. It’s an adult video game.” Online, we operate in what David Brooks calls a “coliseum culture” where we sit around watching someone get rhetorically eaten alive. There are some mornings where I wake up and wonder to myself: “Who is the Internet going to be mad at today?” What’s ironic about this emerging shame culture is the way it draws out the longings of the human heart for justice and the way it tries, but fails, to mirror the story the Bible tells about righteousness and justice, forgiveness and grace.

Andrew Sullivan, an agnostic journalist, nonetheless notices that this phenomenon is “filling the void that Christianity once owned, without any of the wisdom and culture and restraint that Christianity once provided.” Sullivan sees the parallel: “Like early modern Christians, they punish heresy by banishing sinners from society or coercing them to public demonstrations of shame, and provide an avenue for redemption in the form of a thorough public confession of sin.” Dave Zahl smartly says the online shame culture is “Christianity with all of the forgiveness sucked out.”

It turns out that perhaps this secular age isn’t so secular after all. We have progressed, but not beyond our longings for justice. We have not abandoned our notions of sin, judgment, and wrath. There is a Hell: It’s called cancel culture and erasure and we want to send the bad people on the Internet there.

The Good News of Christ

And yet what good news we have to offer in the real gospel. Christians possess a better story that accurately sees a world that is deeply broken, full of deep evil that must be avenged. Only we are not, as we’d like to think, on the right side of history, but on the wrong side of God. And the fire and brimstone we want to see everyone else endure are headed for our heads. This is our reality and yet, this is our hope, for in Jesus we see God’s perfect wrath exercised on a bloody cross and a lonely hill outside Jerusalem. Think of your hottest rage against the most egregious evil and multiply it exponentially. This is the anger of God against sin. But instead of directing toward sinners, he poured it out on Jesus.

Jesus, innocent and full of truth and beauty, was the original scapegoat. Jesus was “made sin for us" (2 Corinthians 5:21).  Jesus was shamed so that our own sins might be forgiven. And God invites to his table those who were his enemies. It is sin and death and injustice, then, that are canceled, and we are invited into God’s favor.

Embracing the Gospel in Our Online Conversations

Christians should press this good news into our online conversations. We are rightly angry at evil and we rightly seek to protect the vulnerable and for the bullies to lose their power. But any justice we seek will only ever be temporary and sometimes it’s arbitrary and misguided. We see through a “glass darkly” and often our desire to crush those we perceive to be our enemies puts us not on the side of the oppressed, but the side of the oppressor. That seemingly innocent pressing of “send”, that quick post of a news story, that heated, emoji-filled rant might put us, not on the side of Jesus, but in the crowd that preferred Barabbas.

A cancel culture that seeks to isolate perceived bad guys from mainstream society through public shaming may one day come for you or your tribe. Jesus calls us to something better. Rather than erasing people with whom we disagree, he calls us to see everyone, even the person who offends our sensibilities the most, as an image-bearer of God. What gets lost in the rush to condemn is the humanity of the person we are condemning. This doesn’t mean there aren’t truly reprehensible people doing awful things. But it’s the desire to see someone suffer, to load all of our anger and rage on them, that strips people of their humanity and makes them, for us, simply avatars to be crushed. James reminds us that in our speech we must not lose sight of the image-bearing nature of those we oppose (James 3:9).

Daniel Darling previously served as vice president of communications for the ERLC. Dan is the author of nine books, including The Original Jesus, The Dignity Revolution, and the bestselling The Characters of Christmas. Dan's work has been featured in outlets such as USA Today, Washington Post, National Review, and Christianity Today. He and his wife Angela have four children. They attend Green Hill Church in Mt. Juliet, Tenn., where Dan serves as pastor of teaching and discipleship.

Listen for God's Voice Over the Noise of the World

How did things become so crazy? Why do we find ourselves frazzled and feeling overwhelmed? I think we have the tendency to listen to the wrong voice. We have to intentionally tune out the world and take in God's Word. 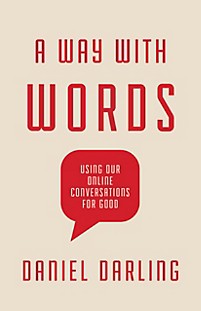 In A Way with Words, Daniel Darling believes we need an approach that applies biblical wisdom to our engagement with social media.