We can learn three truths from Joseph's suffering and temptation.

On the other hand, we’re empowered when we humble ourselves enough to recognize that every temptation we deal with is something others have experienced and are experiencing. Your temptation is not unique.

It seems we are never more susceptible to a major act of sin than when we’re suffering.

Have you ever given into temptation because you thought you deserved the person or pleasure it was offering? Have you succumbed because God “hasn’t shown up” for you in a while? Has your situation become so lonely and your rejection so painful that you think, surely my actions are justified? I’ve been there, and I understand that struggle from a deeply empathetic place in my heart. That’s why I’m thankful God preserved this part of Joseph’s story for us. Joseph’s reasons for resisting temptation during a lonely and painful time can help protect us from temptation’s harm.

After some time his master’s wife looked longingly at Joseph and said, “Sleep with me.” But he refused. “Look,” he said to his master’s wife, “with me here my master does not concern himself with anything in his house, and he has put all that he owns under my authority. No one in this house is greater than I am. He has withheld nothing from me except you, because you are his wife. So how could I do this immense evil, and how could I sin against God? ” Although she spoke to Joseph day after day, he refused to go to bed with her. Now one day he went into the house to do his work, and none of the household servants were there. She grabbed him by his garment and said, “Sleep with me! ” But leaving his garment in her hand, he escaped and ran outside.

Have you ever thought that the wayward desires you’re experiencing are different from all others’? It’s just like the enemy to tell you that you’re the only one who deals with a particular temptation. This blatant lie will cause you to feel powerless against temptation as if giving in is your only option. On the other hand, we’re empowered when we humble ourselves enough to recognize that every temptation we deal with is something others have experienced and are experiencing. Your temptation is not unique.

Dearest friends, if I could leave you with anything today, it’s this: don’t let your suffering lead to sinning. As we said at the start, we’re especially vulnerable to sin when we’re in the middle of pain. So let’s be on our guard, especially when we’re hurting. And remember, God is never the source or author of our temptation (Jas. 1:13). I want to close with three truths I’ve learned from this part of Joseph’s life and through my own life experiences.

Joseph believed that God’s boundaries were good, and this belief kept him from sinning. I wonder if you, like me, have ever questioned whether or not God really has your best in mind. When we believe that His commands are good, we’ll be less likely to cross the lines He’s set for our safety and flourishing.

2. Our sin is first and foremost against God.

Many times I’ve fled from temptation simply because I knew the consequences would be overwhelming. As I’ve grown in my relationship with Jesus, my reasons for avoiding temptation now have more to do with how costly sin would be to my intimacy with Him. If your main reason for not sinning has to do with the consequences, it’s not a bad reason but it’s an incomplete one. While it’s always good to flee temptation, only your love for Christ will keep you on a lifelong path of devotion and obedience to Him.

3. All temptation eventually comes to an end.

Joseph’s temptation went on day after day, a detail that shows the duration of time as well as intensity. Temptation is often oppressive and relentless, as it was in Joseph’s case. But eventually, his temptation came to an end and so will yours.

What is God speaking to you about today? If there’s a temptation you need to flee from, take a page out of Joseph’s book and run for your life in the other direction, even if it means leaving something dear behind. Nothing you lose while fleeing will compare to what you might lose if you give in to sin or what you will gain in obedience. Let a trusted friend know about your struggle or ask some people who love you to keep you accountable.

By committing to following God’s way of escape when temptation feels perfectly overwhelming, we’re actively putting our faith in Him instead of what feels natural to us. The choices Joseph made during this season of temptation would pay off immeasurably for the rest of his life. Perhaps one of our greatest acts of worship is obeying God in the midst of our pain.

Kelly Minter is passionate about teaching the Bible, and she believes it permeates all of life. She’s found personal healing and steadfast hope in the pages of Scripture. When she’s not singing, writing, or speaking, you can find her picking homegrown vegetables, enjoying her six nieces and nephews, or riding a boat down the Amazon River with Justice & Mercy International. A Southern transplant, Kelly delights in neighborhood walks, watching college football, and a diner mug of good coffee with her closest friends.

Kelly’s love for the Word of God also led her to write in-depth Bible studies. Those Bible studies include Ruth: Loss, Love & Legacy; Nehemiah: A Heart That Can Break; What Love Is: The Letters of 1, 2, 3 John; All Things New: A Study on 2 Corinthians; and No Other Gods: The Unrivaled Pursuit of Christ.

In the midst of hardship, tragedy, and unanswered questions, it’s difficult to glimpse God at work. How do we hold onto our faith during these times? How do we trust God is working all things for our good and His glory?

Over 8 sessions in Finding God Faithful, trace the path of Joseph’s life in the Book of Genesis to observe how God’s sovereignty reigns, even in our darkest moments.

How Can a Solar Eclipse Show God's Glory?

When I take the time to meditate on God’s greatness in the Psalms, when I worship Him with adoration, when I fall before Him in prayer, my cares come into proper perspective. My priorities fall into order. My idols prove downright silly in comparison.

Sharing the Gospel in Your Community

Some think the gospel package is too narrow, others find it offensive or woefully irrelevant. But do you see how sharing the gospel in your community will crawl into every crevice of your life and faith? God has prepared you to go and tell.

Kelly Minter is an author, speaker, songwriter, and singer passionate about women discovering Jesus Christ through the pages of Scripture. Whether it’s through a song, study, or spoken word, Kelly’s desire is to authentically express Christ to the women of this generation. 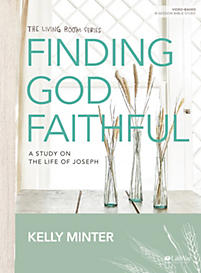 Over 8-sessions, study Joseph's life and God's plan, provision, and purpose for him.