Don't Invite the Ruin of Pride

Pray to walk in humility instead.

Pride promotes itself as an ally to the insecure, but it crumbles fast. Pride breaks apart families. It destroys relationships. It separates us from God. It fractures reputations and crushes potential. Pride doesn’t protect us, it betrays us. So why do we build our lives on it?

Let's travel to 1767 France to meet a composer, Johann Schobert. But if he invites you to dinner, say no. Here’s why.

It was a sunny Parisian day in Le pré-Saint-Gervais when a happy Johann set out mushroom picking with his family. Birds fluttered and chirped, a breeze rustled the leaves in the trees, and the fragrance of wet earth filled the air. There was no shortage of mushrooms that day.

Johann had built up quite an appetite by the time he returned with his family and a basket brimming with those smokey, woodsy delicacies. But Schobert was a composer, not a chef. What was he supposed to do — pull out a skillet to make dinner? Schobert would leave it to the professionals.

So he took his treasured fungi to a local chef and asked him to prepare them. The chef scowled, shook his head, and replied with the French equivalent of, “No way, Johann!”

The chef told him that the mushrooms were poisonous.

But that didn’t deter the mushroom-loving Schobert. After all, that was just one chef ’s opinion. So he scooped up his mushrooms and found another chef in another restaurant in Bois de Boulogne. Johann unveiled his culinary find to the second chef and asked him to prepare the mushrooms for him. Again, he got the French equivalent of, “No way, Johann!”

The second chef told him the mushrooms were poisonous.

Schobert wanted his mushrooms, though. He didn’t even entertain the possibility that those chefs could be right. He found a doctor acquaintance and asked the good doctor if he thought the mushrooms would be OK to eat. The doctor shrugged and offered the French equivalent of, “Sure, Schobert, help yourself.”

A vindicated Schobert nodded curtly and carried his bounty home and into the kitchen. Within hours, a fragrant soup was simmering. The table was set and Schobert had to feel so satisfied he was getting his mushrooms his way. He invited his doctor friend to have dinner with his family, and they all enjoyed their soup.

Schobert, his wife, all but one of their children, and his doctor friend died.1

I want to hear those words clearly in my own soul. “Jennifer, it can save you to admit you are wrong.” It could have saved the Israelites in Amos’s day too.

When we don’t accept the invitation to live humble, we invite the ruin pride brings.

My friend, let’s flip back to Amos 3 to see a vivid picture of the consequences of pride.

Listen and testify against the house of Jacob — this is the declaration of the Lord God, the God of Armies. I will punish the altars of Bethel on the day I punish Israel for its crimes; the horns of the altar will be cut off and fall to the ground. I will demolish the winter house and the summer house; the houses inlaid with ivory will be destroyed, and the great houses will come to an end. This is the Lord’s declaration."

Prosperous Israel had some big houses — summer houses and winter houses — back in the day.

Archaeologists found that prior to King Jeroboam II, cities in Israel had homes that were all about the same size. But when archaeologists studied homes from around the time when Amos was preaching, they found a change. Commentator David Guzik wrote, “starting in the eighth century B.C. — ancient cities like Tirzah have a neighborhood of large, expensive houses and another neighborhood of small, crowded structures, smaller than the houses from previous years. The larger houses are filled with the marks of prosperity, and the oppressive rich of Israel thought they could find safety there — but God’s judgment came against those houses as well, just as Amos promised.”2

Look back at verse 15. The condemnation wasn’t about the homes themselves; it was what the homes represented. Sister, it is always about our hearts.

Those grand homes were built with more than wood and stone. They were built from the exploitation of the poor, oppression, and downright apathetic selfishness. They were brick and mortar representations of Israel’s pride and injustice. God made it clear that pride came before destruction, and this passage in Amos 3 is such a vivid affirmation of that truth.

But again, Amos was not making this about houses, but about hearts — our hearts. Pure hearts can earn big paychecks, and a minimum wage worker can have a haughty spirit. Pride can wear rags, and humility can dwell in a mansion.

But the truth is that pride breaks things. Pride promotes itself as an ally to the insecure, but it crumbles fast. It brings its own destruction. Pride breaks apart families. It destroys relationships. It separates us from God. It fractures reputations and crushes potential. Pride doesn’t protect us, it betrays us. So why in the world would we hold on to it and build our lives on it?

"While pride demands you admit no wrong, humility admits error, mistakes, shortcomings, sin. … So, pride be gone! May we proceed on our knees in humility together."

One of the essential parts of the good life is admitting you are wrong. You’ve been wrong; I’ve been wrong. While pride demands you admit no wrong, humility admits error, mistakes, shortcomings, sin. Pride is a poisonous mushroom stew that you think will nourish you, but it actually annihilates you.

So, pride be gone! May we proceed on our knees in humility together.

Has God shown you pride in your life you need to turn from and walk in humility instead? Oh, girl, don’t be ashamed. Pride shows up in my life all the time, and I have to constantly repent.

Oh, my sister, it won’t kill you to admit you are wrong, but it may destroy what matters most to you to remain wrong. So live humble.

Amos told Israel her ways would bring her destruction. But instead of the Israelites listening to what they didn’t want to hear and admitting they could be wrong, they dug in their heels and let pride dig their own graves. Like Schobert and the deadly mushroom stew, it killed them to not admit they were wrong. If they had only humbled themselves, things may have turned out differently.

Excerpted from Amos: An Invitation to the Good Life published by Lifeway Press®. © 2022 Jennifer Rothschild.

Known for her substance and a down-to-earth teaching style, Jennifer Rothschild weaves together colorful illustrations, universal principles, and music to help audiences find contentment, walk with endurance, and celebrate the ordinary. With wit and poignant story-telling, Jennifer shares challenges in her life, encouraging women to look beyond their circumstances. She is author of several Lifeway Women Bible Studies.

Discover the Heart Behind Amos: An Invitation to the Good Life

How God Works Through Humanity

The book of Exodus offers an inside look at how God works and gives us a glimpse of God inviting humanity to join Him in accomplishing His plans. He speaks to Moses, but He also speaks through Moses.

Are You Following the Best Leader?

No leader, however gifted, can outmatch what Jesus accomplished. Considering Jesus as the author of Hebrews encourages us to do will guide us to see that nothing and no one is worth comparing to Jesus.

Be Kind — It's the Spiritually Mature Thing To Do

We can be both kind and courageous because we have the truth on our side. To be kind is seen by the Bible as a sign of spiritual maturity. It’s something the Spirit of God does in us over time. 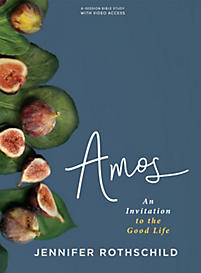 Amos is often called a prophet of doom. And when you begin to read his prophecy, it doesn’t take long to realize that nickname fits. On the surface, his prophecy doesn’t sound like a happy formula for the good life. However, every condemnation he gives serves as an invitation, a cry for us to “seek God and live” (Amos 5:4). You’ll be invited to live assured, faithful, chosen, humble, justly, prayerful, and hopeful. This kind of living will bring us and others around us peace and true prosperity.