Connection and Isolation In Our Digital World

If we're more connected than even, why are we growing isolated?

On the surface, while the Internet, smartphones, and the rise of the gig economy appear to be connecting us with one another, they’re actually doing the very opposite. They’re exacerbating the problems of disconnection, isolation, and loneliness.

We are now more connected as a society than ever before. When traveling to speak, I use FaceTime to be a part of my children’s bedtime routine. Viber is the instant messaging app I use to stay in touch with my parents and siblings. And Facebook, Instagram, and Twitter are my apps of choice to stay connected with friends and acquaintances.

Isn’t this night and day from what it used to be? Remember when you had to pay long-distance fees to call someone outside of your city? When my wife's parents were dating long distance, her dad would call her mom once a week on payday using a payphone and a roll of quarters! Now you can call anyone in the world for free using an app.

So if we’re more connected than we’ve ever been, and it’s easier (and cheaper) to stay in touch with others, why are we growing isolated? Is it because of the Internet, smartphones, and the rise of the gig economy?

Two decades ago when Robert Putnam wrote Bowling Alone to investigate why our society was growing increasingly disconnected, the Internet was booming—but it was in its infancy. Facebook didn’t exist, and neither did MySpace. In fact, other than a few instant messaging services, the Internet had no social aspect about it. Back then, it was all about finding information, rather than connecting with others. What a far cry from today!

There’s no doubt that the Internet has vastly accelerated our growing connection and disconnection from one another, but as Putnam argues, it definitely wasn’t the cause of it:

"The timing of the Internet explosion means that it cannot possibly be casually linked to the crumbling of social connectedness...Voting, giving, trusting, meeting, visiting, and so on had all begun to decline while Bill Gates was still in grade school. By the time that the Internet reached 10 percent of American adults in 1996, the nationwide decline in social connectedness and civic engagement had been underway for at least a quarter of a century...The Internet may be part of the solution to our civic problem, or it may exacerbate it, but [it] was not the cause."

In a similar way, while the ubiquity of smartphones and the rise of the gig economy are not the cause for our growing disconnectedness with one another, they may just be the very things that are rapidly accelerating it.

Just consider the implications surrounding our smartphone usage. The majority of all smartphone owners rarely or never turn their phones off. They always have it with them wherever they go. In fact, according to one study from Deloitte, Americans are now checking their smartphones an average of 52 times per day! No wonder tech companies like Apple and Instagram have rolled out features to help individuals track and limit their personal usage. And let’s not forget what Vitaminwater recently did! They launched a contest to give $100,000 to one lucky individual who was willing to stay off their smartphone for a year.

Why would they do this? And what do you think the obsessive usage of our smartphones is doing to us?

Why are we opting out of present, embodied moments to scroll through other people’s past experiences on a screen?

It’s amazing how our smartphones have created this sense of constant connection with others. Just think about the way you said goodbye to a friend who was moving away twenty years ago versus in the past couple of years. Back then, you never knew if you were going to see or talk to them again. But now, goodbyes don’t seem to be as dramatic since we are constantly connected to one another online.

So if we’re constantly connected to one another due to our smartphones, how is it possible that our phones are simultaneously leading us to disconnection and isolation? Well, have you ever used your phone in front of others? Choosing to scroll through social media, read the news, or answer emails, instead of engaging in a conversation with those around you? And what about the last time you were at a coffee shop or restaurant with another person? Was your phone face up, so that you didn’t miss whatever it is that you were waiting for? That’s how.

In fact, if you’ve ever done this, you’re in good company because a third of those officially surveyed in 2014 admit to occasionally using their phones to avoid interacting with others in public spaces. Four years later, in a few of my unofficial surveys, it’s over 80 percent. Why are we opting out of the present, embodied moments to scroll through other people’s past experiences on a screen?

And while freedom is the allure of the gig economy—that you will have more flexibility in your schedule to spend time with your loved ones, and money to spend on experiences—it actually leads to the opposite. Just consider the free time or downtime that you used to have after work to invite friends over for dinner, to talk with your neighbors, or go to the lake with your family on the weekends? Haven’t you replaced some or all of it with hustling, grinding, and working on the side, so that you’ll have more money to spend time with them...at some point in the future?

Do you see the false logic in that? You’re giving up free time to work so that you’ll have more money for free time in the future. How does this make sense? To exchange present moments of real connection for future moments of hopeful connection? What if that future moment never comes? Or what if the lack of time spent with them now, leads to them not even wanting to spend time with you in the future? And that’s if they’re even still around.

This lie is so deceptive. On the surface, while the Internet, smartphones, and the rise of the gig economy appear to be connecting us with one another, they’re actually doing the very opposite. They’re exacerbating the problems of disconnection, isolation, and loneliness. We are more disconnected than ever before, which is leading to a decline in trust. And the more disconnected and untrusting we become, the more we are going to turn inward and become unhealthily obsessed with ourselves.

Excerpted with permission from You Are What You Do by Daniel Im. Copyright 2020, B&H Publishing Group.

Daniel Im is a speaker and leader who has pastored in five major cities around the world in churches ranging from 100 people to 50,000 people. He has written two books: No Silver Bullets: Five Small Shifts that will Transform Your Ministry and Planting Missional Churches: Your Guide to Starting Churches that Multiply (second edition). Daniel lives in Alberta, Edmonton in Canada with his wife Christina and their three children.

Stories can be delightfully and therapeutically subversive. When we are caught up in  one, we let our guard down, if just for a moment. That moment, however, is enough for desire to surface, for grief to sting, and for joy to envelop. We put down the story and feel strangely alive. The healing has begun.

10 Books Every Christian Needs in Their Library

Consider this list a framework to get you started with books that are foundational for life. These are simply categories of books, with some recommendations and ideas, that any Christian who wishes to have an intentionally curated library should seriously consider.

How to Navigate Difficult Conversations in Your Church

Few things are more difficult to attempt and handle well than having difficult conversations with church members. How can pastors and leaders navigate these potentially explosive situations? Here are a few ideas that might help.

How Do We Love One Another as Christ Loved Us?

Sometimes it can be hard to love one another. Even as we pursue Christ, we find ourselves irritated and short with others. Love can be a difficult trait to pursue day in and day out. What does it look like to love one another the way Christ loved us? 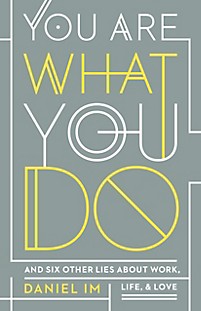 In You Are What You Do, author and pastor Daniel Im breaks down the reality of our connection and isolation in a digital world.