A Greater Purpose for Your Money

Our money’s priority is Kingdom-advancing generosity.

When was the last time you used your money in a way that brought about a sense of excitement, adventure, and satisfaction, a time that you have yet to regret? I bet it was a time when you used your money for something greater than yourself. You helped a family in need. You provided Christmas gifts for a child whose parents could not afford them. You gave to your church and her mission.

And you would do it all over again. Why do we experience such contentment and happiness through generosity? Why does our soul yearn to live generously?

Because our God is a generous God, and we are created in His image. God has designed us, not to be hoarders, but conduits through which His generosity flows.

Over the next 30 years, it is estimated that over $30 trillion dollars will pass from one generation to the next through inheritances.

Let’s assume that Christians make up 25% of our population. That means that around $7.5 trillion will be in the hands of Christians.

In inheritances alone, Christians will receive $7.5 trillion. To reach every people group in the world, we need $4.8 billion. The difference between one trillion and one billion? One trillion is equal to one thousand billion.

Let that sink in for a second. The need is a drop in the haves’ bucket. We have the resources to reach the world for Christ.

We have the resources to reach the world for Christ. Right now. Pick apart the numbers all you want. The fact remains—God has given us an amazing opportunity.

Pick apart the numbers all you want. The fact remains—God has given us an amazing opportunity.

But it’s only amazing if we take hold of it.

And what if we don’t? What if we squander it? Are we going to be the generation of Christians that cause future Christians, one hundred years from now, to wonder what we were thinking and doing? We had it in our hands! Yet, we did little with it.

But what if we do?

Advancing God’s Kingdom—this is your and my “why.”

This is why we get out of debt.

This is why we save money.

This is why we pursue financial health.

And this is why we find more money.

Our money’s priority is Kingdom-advancing generosity. You’re not making more money just to pay the bills, get out of debt, or save for retirement. These are good things, but they are the means, not the end. They are the means by which we can find ourselves more able to live the generous, Kingdom-advancing life for which God has designed us, where we can more freely pour into our community and the world for His sake.

You thought that you were just trying to make more money to pay the bills and get rid of your car loan? No, this is about something much more significant, adventurous, and satisfying than that.

Art Rainer is the Vice President for Institutional Advancement at Southeastern Baptist Theological Seminary. He holds a Doctor of Business Administration from Nova Southeastern University and an MBA from the University of Kentucky. He writes widely about issues related to finance, wealth, and generosity, and is the author of The Money Challenge: 30 Days of Discovering God’s Design for You and Your Money, and The Marriage Challenge: A Finance Guide for Married Couples. Art lives in Wake Forest, North Carolina with his wife, Sarah, and their three children. 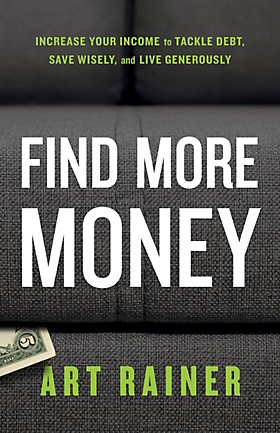 What do you do when cutting your budget no longer cuts it? If your full-time job barely, or doesn't, provides what you need, how can you even begin to think about eliminating debt, saving, and living generously?

Financial expert and author Art Rainer (The Money Challenge; The Marriage Challenge) helps answer these questions in Find More Money by pointing readers to the reality of the gig economy. When a full-time job doesn’t provide what you need, finding a “gig” may be the answer to your problems.

When we use what He has given us for His purposes, that's biblical stewardship. These five values complement one another in earning, saving, giving, and spending money by good stewardship practices.

Principles and best practices are of no value if we only know them intellectually. Knowing and doing is the key to experiencing God’s promises. Living accordingly will help you to thrive.

But in your planning, we’d like you also to consider the potential missteps on your quest to achieve those goals. Before you can prosper from your newly minted financial resolutions, it’s wise to take a good look at the months ahead.

When a full-time job doesn’t provide what you need, finding a “gig” may be the answer to your problems. Learn more from Art Rainer in Find More Money.