12 Days of Christmas: Celebrate Christ with Your Family

Here are 12 days' worth of suggested Scripture readings and family activities to help you celebrate our wonderful Savior and the season of His birth. 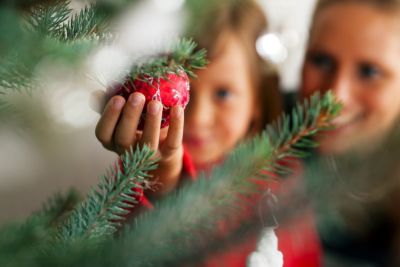 December is often the busiest month of the year for families. Between school activities, holiday parties, church outreach events, and the pressure to find the perfect gift for each person on your list, it can be difficult to squeeze in quality family time. We've pulled together 12 days' worth of suggested Scripture readings and family activities that we hope will make things easier for you this season. Do them in order or spread them out; that part's up to you, but make time to celebrate our wonderful Savior and the season of His birth.

Day 1. "Therefore, the Lord Himself will give you a sign: The virgin will conceive, have a son, and name him Immanuel" (Isaiah 7:14).

Day 2. "For a child will be born for us, a son will be given to us, and the government will be on His shoulders. He will be named Wonderful Counselor, Mighty God, Eternal Father, Prince of Peace. The dominion will be vast, and its prosperity will never end. He will reign on the throne of David and over his kingdom, to establish and sustain it with justice and righteousness from now on and forever. The zeal of the Lord of Hosts will accomplish this" (Isaiah 9:6-7).

Family Activity: Call the grandparents, and sing them a Christmas carol.

Day 3. "Bethlehem Ephrathah, you are small among the clans of Judah; One will come from you to be ruler over Israel for Me. His origin is from antiquity, from eternity" (Micah 5:2).

Family Activity: Be a secret Santa to someone in need. Consider your neighbors, friends, and church members as people to whom your family should extend gifts or assistance.

Day 4. "Then the angel told her: Do not be afraid, Mary, for you have found favor with God. Now listen: You will conceive and give birth to a son, and you will call His name Jesus ... The angel replied to her: ‘The Holy Spirit will come upon you, and the power of the Most High will overshadow you. Therefore, the holy One to be born will be called the Son of God'" (Luke 1:30-31,35).

Family Activity: Eat dinner in the car while you drive through your community looking at Christmas lights. For extra fun, make a scavenger hunt out of it by providing a list of items to look for such as a manger, reindeer, and snowmen.

Day 5. "When Elizabeth heard Mary's greeting, the baby leaped inside her, and Elizabeth was filled with the Holy Spirit. Then she exclaimed with a loud cry: ‘You are the most blessed of women, and your child will be blessed! How could this happen to me, that the mother of my Lord should come to me? For you see, when the sound of your greeting reached my ears, the baby leaped for joy inside me! She who has believed is blessed because what was spoken to her by the Lord will be fulfilled!'" (Luke 1:41-45)

Day 6. "And Mary said: My soul proclaims the greatness of the Lord, and my spirit has rejoiced in God my Savior, because He has looked with favor on the humble condition of His slave. Surely, from now on all generations will call me blessed, because the Mighty One has done great things for me, and His name is holy" (Luke 1:46-49).

Family Activity: Unroll the sleeping bags, and spend the night under the lights of your Christmas tree.

Day 7. "So her husband Joseph, being a righteous man, and not wanting to disgrace her publicly, decided to divorce her secretly. But after he had considered these things, an angel of the Lord suddenly appeared to him in a dream, saying, ‘Joseph, son of David, don't be afraid to take Mary as your wife, because what has been conceived in her is by the Holy Spirit. She will give birth to a son, and you are to name Him Jesus, because He will save His people from their sins'" (Matthew 1:19-21).

Family Activity: Write a note to a family member, and slip it in his or her stocking to be read on Christmas morning. Draw names so that all family members are sure to get a note.

Day 8. "In those days a decree went out from Caesar Augustus that the whole empire should be registered. This first registration took place while Quirinius was governing Syria. So everyone went to be registered, each to his own town. And Joseph also went up from the town of Nazareth in Galilee, to Judea, to the city of David, which is called Bethlehem, because he was of the house and family line of David, to be registered along with Mary, who was engaged to him and was pregnant" (Luke 2:1-5).

Family Activity: Help each child make a gift for his or her teacher. Include handwritten notes from you and your child, a sweet treat, and a small gift card.

Day 9. "While they were there, the time came for her to give birth. Then she gave birth to her firstborn Son, and she wrapped Him snugly in cloth and laid Him in a feeding trough - because there was no room for them at the lodging place" (Luke 2:6-7).

Family Activity: Using your Nativity set, ask your kids to tell the story of Jesus' birth. If you're feeling extra creative (and have enough family members), have everyone take a role and act out the nativity.

Day 10. "Then an angel of the Lord stood before them, and the glory of the Lord shone around them, and they were terrified. But the angel said to them, "‘Don't be afraid, for look, I proclaim to you good news of great joy that will be for all the people: Today a Savior, who is Messiah the Lord, was born for you in the city of David'" (Luke 2:9-11).

Day 11. "When the angels had left them and returned to heaven, the shepherds said to one another, ‘Let's go straight to Bethlehem and see what has happened, which the Lord has made known to us.' They hurried off and found both Mary and Joseph, and the baby who was lying in the feeding trough. After seeing them, they reported the message they were told about this child, and all who heard it were amazed at what the shepherds said to them" (Luke 2:15-18).

Family Activity: Flip through the Christmas cards you've received and pray over each family by name. Encourage your children to pray for anyone who is special to them.

Day 12. "After Jesus was born in Bethlehem of Judea in the days of King Herod, wise men from the east arrived unexpectedly in Jerusalem, saying, 'Where is He who has been born King of the Jews? For we saw His star in the east and have come to worship Him.' ... After hearing the king, they went on their way. And there it was - the star they had seen in the east! It led them until it came and stopped above the place where the child was. When they saw the star, they were overjoyed beyond measure. Entering the house, they saw the child with Mary His mother, and falling to their knees, they worshiped Him. Then they opened their treasures and presented Him with gifts: gold, frankincense, and myrrh" (Matthew 2:1-2,9-11).

Family Activity: Make ornaments to represent the different parts of the Christmas story (such as a crown for the wise men), and discuss the importance each played in the birth of Jesus.

Nancy Cornwell is a freelance writer and editor. She loves celebrating the holidays with her husband, Chris, and their two daughters, Lilliana and Emmalyn.