Your Identity Comes from God

Only the One who made you has the right to give you your true name.

I once gave myself a new name. And, no, I’m not joking. After attending a private Christian school from kindergarten through eighth grade, I transferred to a nearby public school for my freshman year, where almost none of the other students or any of the teachers knew me. And at the last minute, I decided it would be a fun experiment to change my name.

So I did. I decided not to be “Priscilla” anymore.

Somehow, it made perfect sense in my teenage mind to change my name to something else — something cooler, I thought, something quirkier — a clever nickname I decided I wanted to be called by. (I’ll spare you the detail of telling you what it is. It would take a whole other chapter to explain what could possibly have seemed intriguing about it.)

I can still see my friend, Nicole, from the youth group at church, going around that first day, helping introduce me to people. We’d pass other kids in the hallway, and she’d say to them, “Hey, y’all, this is Pri—I mean, uh,” pausing to shoot me an inquisitive squint, as if to say, Girl, are we really going through with this?

And guess what? It worked! By the time I graduated, not one teacher, not one student, not one coach or member of the school administration referred to me by any other name than the one I’d handpicked for myself. Even my sports uniforms and letterman’s jacket were monogrammed with it. I’d successfully renamed myself. In fact, to this day, if someone ever passes me around town or addresses me on social media by that name, I know it’s someone I went to high school with.

Now, my parents didn’t seem to mind it too much back then — my informal, impromptu decision to be called by another name. I think they saw it as nothing more than a teenage girl thing. A phase. No big deal. But as my senior year began winding down, my mother, who’d mostly held her tongue on how she felt about it, decided she needed to speak up. With an official graduation ceremony approaching in the near future, where she’d be forced to sit and watch me cap my high school career to the sound of a different name from the one she’d given me at birth, she decided she’d kept her opinion to herself long enough. She cornered me in the house one day and, with a “this is your mama speaking” directness to her voice, said: “Priscilla …!” Followed by something like this …

When I see you walk across that stage at graduation, I’d better not hear or see your little nickname anywhere in the vicinity of your diploma. Because no matter how many people call you that, it is not your name. The only two people who have the right to give you your name are your dad and I. And your name is the one we gave you on the day you were born.

Point made. Not so much loud as clear. At the time, I didn’t realize the important life lesson this harmless high school experience would teach me. But I see it now. This was about more than just a nickname. It was about identity. No one else besides the One who made you has the right to give you your true name. Not even you have the right to give yourself that name, to redefine who you are. Any label that is different from the one your heavenly Father gave you is flat-out false.

Even if, like me, you choose a new name, a new identity doesn’t come with it. Only the One who gave you life can give you your identity.

He has made us. And He has named us.

And His name for you is your real and only name. Your identity and significance come from Him. Not what others have said (or haven’t said, no matter how much you’ve wished they would). Not the mistakes you’ve made (or haven’t made, which may have led you to think too highly of yourself and feel a bit judgmental of others). Not the secret desires you harbor, the weaknesses you’ve indulged, the abuses you’ve endured, or even the successes you’ve achieved.

No, your Father’s name for you — the core value He has placed in you — is the one that eclipses all others and gives you true significance no one can take away.

Priscilla Shirer is a Bible teacher and conference speaker with a Master’s degree in Biblical Studies from Dallas Theological Seminary. Also a popular author, her books include the New York Times Best-Seller, The Resolution for Women, One in a Million, and Life Interrupted. She is also the lead character in the War Room movie. Priscilla is married to Jerry with whom she founded Going Beyond Ministries. They have three sons and live in Dallas, Texas. 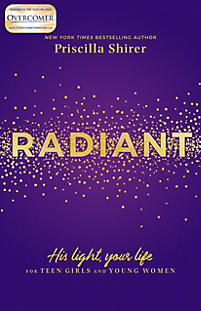 Did you know that God’s light can shine through every facet of your identity? Radiant is an invitation for teen girls and young women to enjoy a candid conversation on identity with bestselling author Priscilla Shirer. You’ll hear reflections on life lessons she’s gathered from her teen years until now. She’ll show you how the light of God’s Word shaped her identity, and she’ll teach you how it can change and shape your life as well.

Jesus Christ inhabited time and space in the first century and is recognized around the world as the most loving, powerful, and influential person ever to have walked the earth. But also this: His entire life is a vivid illustration of the priority of identity.

God Knows Every Hair on Your Head

Radiant helps teen girls learn that only God can tell them who they really are.