You Are a Part of God's Family

Jesus has opened wide the door into an intimate love of the Father and His Father’s family.

God has given us many gifts to enjoy in this life that are meant to be pictures of spiritual truths. Marriage is a picture of the love between Christ and His church. Singleness is a picture of Christ being all-sufficient for us. The Lord’s Supper is a visible picture of Christ’s body broken for us and His blood poured out on the cross.

As we’ve discovered, the kingdom of God is a people who enjoy God’s provision and rest under His protective power in a specific place. We’re not yet in the place reserved for us in heaven, so presently the kingdom of God is seen in the gathering and relating of the saints—the Church. When we think of the people of God, we should think of the family of God. And we identify ourselves to the world as Christ’s disciples by the way we love each other. In our passage today, Jesus uses language that helps us know exactly what type of love this is to be: a familial love. We’re to know and be known, challenge one another to grow, mourn, and rejoice together, and work through hurts together.

"Once again, Jesus has opened wide the door of the kingdom, beckoning us into an intimate love of the Father and His Father’s family."

In Matthew 12:46-50, Jesus asked the man who interrupted His teaching, “Who is my mother, and who are my brothers?” Everyone involved knew the answer, so it seems an odd question to ask. At first, we may read this with a harsh undertone, as if Jesus was excluding or shooing away His biological family. However, if we consider what Jesus was asking as a way of redefining terms, it puts His question in perspective. He wasn’t asking about the identities of His biological family; He was asking the man (and the listening crowd) to consider who is included in His spiritual family—the kingdom of God. He expanded the idea of family beyond biological lines, thus indicating an inclusive, generous invitation for anyone who wants to be a part of the kingdom through faith in Him. If they believe, they become a part of the family of God.

The use of family language—brother, sister, mother, father—to describe relationships in the church is prominent in the New Testament. The use of familial terms demonstrates that the kingdom of God is highly relational. Jesus’ teaching and discipleship happened in relationship as He traveled with His disciples. His rebuke of Peter happened over a meal. He healed through physical presence and touch. He said to John as He hung on the cross, “Here is your mother,” and to His mother, “Here is your son” (John 19:26-27, CSB). Through the cross, He brought us into fellowship with the Father and with one another (1 John 1:3).

As the present representation of the kingdom of God, then, the church is intended to be highly relational in all the same ways and highly significant to each of us.

There’s something more at play in Matthew 12:46-50 than Jesus redefining familial terms. Jesus’ biological family wants His attention. They want Him to stop what He’s doing and, in a sense, follow them. But Jesus won’t forsake the service of His Father in order to please His earthly family. He demonstrates that biological family doesn’t come before God in order of importance and prominence.

Once again, Jesus has opened wide the door of the kingdom, beckoning us into an intimate love of the Father and His Father’s family.

Biological family is important, as are our relationships with our spiritual brothers and sisters, but nothing must take the place of our love and devotion to the Father. In fact, we only learn to love well by receiving His love and enjoying fellowship with Him.

Excerpted from Seek First the Kingdom: God’s Invitation to Life and Joy in the Book of Matthew by Christine Hoover.

Christine Hoover is a pastor’s wife, mom of three boys, host of the By Faith podcast, and author of several books. Originally from Texas, Christine and her family live in Charlottesville, Virginia, where they planted a church in 2008. Find her at her home online at ChristineHoover.net.

Are You Searching for Your Calling in Life?

When you live out your God-given purpose, you’ll experience God’s energizing, eternally significant power to leverage your gifts and maximize your life’s fullest potential.

Listen for God's Voice Over the Noise of the World

How did things become so crazy? Why do we find ourselves frazzled and feeling overwhelmed? I think we have the tendency to listen to the wrong voice. We have to intentionally tune out the world and take in God's Word.

God Supplies the Strength We Need in Hard Times

When our spiritual batteries are running low, all we have to do is wait on the Lord and ask Him for strength. God promises that help will flow in response to such a request. 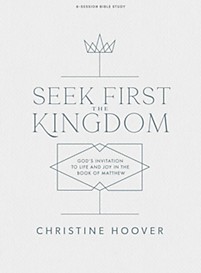 Join Christine Hoover in this 8-session study of the Book of Matthew to reorient yourself solidly around the kingdom and the King who gives life in abundance. Read a free sample of the first session.