With Faith, It Is Possible to Please God

You can draw a direct line between belief and joyful obedience.

Now faith is the assurance of things hoped for, the conviction of things not seen. For by it the people of old received their commendation. By faith we understand that the universe was created by the word of God, so that what is seen was not made out of things that are visible. By faith Abel offered to God a more acceptable sacrifice than Cain, through which he was commended as righteous, God commending him by accepting his gifts. And through his faith, though he died, he still speaks. By faith Enoch was taken up so that he should not see death, and he was not found, because God had taken him. Now before he was taken he was commended as having pleased God. And without faith it is impossible to please him, for whoever would draw near to God must believe that he exists and that he rewards those who seek him.

Hebrews 11:5 mentions Enoch. Enoch is in Genesis chapter five. In Hebrews 11:5 it says, "By faith, Enoch was taken up so that he should not see death, and he was not found because God had taken him." Now before Enoch was taken, he was commended as having pleased God.

Now we know that in the days of Noah, what was the earth like? It was very wicked. So what do you think? Do you think it was that different during the days of Enoch? In fact, we know that Enoch was set apart because he was someone who walked righteously. That should tell us he was unusual for his time. Otherwise, it would really not bear separating him out and giving him special mention.

But Enoch was someone who walked in so much faith that God seems to have spared him from physical death. He just walked him right on up into the presence of God. That's a pretty great story. But before he was taken, he was commended as having pleased God, it says. Now, listen, don't miss this because the author of Hebrews is going to build on this idea of having pleased God. He says, so before Enoch was taken, so during his lifetime Enoch pleased God. Let me follow that up with verse six. Hebrews 11:6 says, “And without faith, it is impossible to please him, for whoever would draw near to God must believe that he exists and that he rewards those who seek him.”

All of our earning before the Lord is filthiness and rags, but listen: with faith, it is possible to please the Lord. Do you know how I know? Because Enoch did. Don't you want to be a person who pleases the Lord?

And you understand this. You understand this just in our simple human relationships with one another—a child desires to please a good parent, not to earn. A child already knows that they have a good parent’s love and affection. They have faith in the affection of the parent, and because they trust the love of the parent, their response is joyful obedience out of gratitude, a desire to bring pleasure to their parent.

But what if it's a child who doesn't trust in the love of a parent? What does that unbelief in the love of the parent translate into? A desire to earn through obedience. It generates a legalist. You can draw a direct line between unbelief and legalism every time, and you can draw a direct line between belief and joyful obedience out of gratitude that pleases the Lord. That's what sanctification does, it turns us into those who want to please Him. Enoch pleased Him so much he just took the longest walk ever and walked right on out of here. That's like the best Old Testament mic-drop ever, Enoch just walking on out of the room.

Excerpted and adapted from Better by Jen Wilkin. Published by Lifeway Press®. © 2019. Used by permission.

Jen Wilkin is an author and Bible teacher from Dallas, Texas. She has organized and led studies for women in home, church, and parachurch contexts. Her passion is to see others become articulate and committed followers of Christ, with a clear understanding of why they believe what they believe, grounded in the Word of God. Jen is the author of Women of the Word: How to Study the Bible with Both Our Hearts and Our Minds, None Like Him: 10 Ways God Is Different From Us (and Why That’s a Good Thing), In His Image: 10 Ways God Calls Us to Reflect His Character, God of Creation Bible study, God of Covenant Bible study, Sermon on the Mount Bible study, and 1 Peter: A Living Hope in Christ Bible study. You can find her at JenWilkin.net.

In Better, a 10-session, verse-by-verse study of the Book of Hebrews, Jen Wilkin explores how God “provided something better for us” in the person of Jesus Christ (Heb. 11:40).

What Does It Look Like to Walk in the Spirit?

We are new creations if we are in Christ, yes, but the battle rages on until Christ returns. The flesh and the Spirit have competing agendas.

Does Suffering Have a Higher Purpose In Our Lives?

Suffering reveals something about God to the world. Job didn’t suffer perfectly, but he did suffer well. When we suffer well—remaining steadfast, hopeful, faithful, and teachable—it is evidence to the world that God is more valuable and trustworthy than wealth, health, and even family. 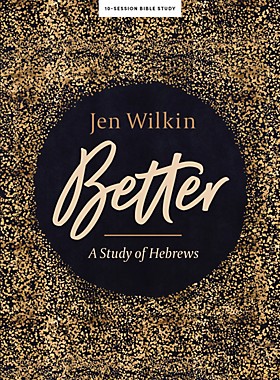 Better, by Jen Wilkin, is a 10-session verse-by-verse study of Hebrews.