What Can We Learn about Faith from Our Kids?

How can we make our faith child-like, but not childish?

For all the growing in knowledge, understanding, and proximity to Jesus the disciples had done, they hadn’t moved much past square one. These children were closer to understanding what it means to come to Jesus and embrace His kingdom than the disciples. The same is true for us.

Picture the scene with me. It’s another busy day in the life of Jesus. His reputation has spread; He scarcely has a moment to Himself anymore. Everywhere He and His disciples turn, there are people. Sick people. Needy people. Accusing people. Skeptical people. And, on this particular day, there are also a bunch of kids.

It seemed parents in the crowd had started pushing and shoving their way forward with their kiddos in tow. They were coming because it was customary in those days for a great teacher of the law to lay their hands on children and pray for them in order to bless them. That’s just what these parents were doing. They, like Nicodemus, didn’t quite know what to make of Jesus, but they had seen and heard enough to know they wanted to get their rugrats some of that blessing He might be handing out.

Jesus’ disciples didn’t want any part of it. In fact, the disciples “rebuked” these tiger parents and their disruptive kiddos (Matt. 19:13). That’s a strong word—rightly so. There was nothing polite about what the disciples did; it’s not as if they pulled mom and dad aside and quietly whispered, “Jesus is actually teaching right now, but we’re going to have a meet and greet later and you are more than welcome to come then.” This word is so strong, in fact, that in another form it can be translated as “punished.”

I can relate, I suppose. I remember a couple of years ago when Jana and I took our three children (then nine, six, and four years old) to the most magical place on Earth. I remember going through the turnstile and being greeted by plants resembling cartoon dogs and ducks and the familiar refrain of “It’s a Small World.” We stood for a moment, looking at the gates of the Magic Kingdom at DisneyWorld, and then the terrible reality hit me: We’re here too early.

That wasn’t the plan. I had clocked it out. My goal was to arrive anywhere from two to seven minutes early because I knew arriving any earlier would result in anarchy. And yet there we stood, 42 minutes prior to gate opening.

“When is it going to open?” Forty-two minutes.

“How come those people are going in?” Because they are staying at a hotel on site.

“Our hotel stinks! I want to stay at that hotel!” Get a job.

that moment, I could have done with an entourage of my own disciples bent on protecting me from the kids. That’s what the disciples did—they formed a verbal and punitive wall around Jesus, and ironically, they did it to protect Him.

Jesus is too busy for that kid. He’s too important to spend time like this. He shouldn’t have to deal with these trivialities. If you only knew Him like we do, you wouldn’t be so quick to bring your snotty brats this close.

Funny how we do that sometimes, isn’t it? Try and protect Jesus? We do it in the marketplace and in debates; we do it in the culture and with the skeptic. We are like Peter, drawing our sword and waving it at any old ear that needs to be cut off, like the Son of God isn’t capable of protecting Himself.

Jesus, in response to the protection of the disciples, is even more incensed than they were at this intrusion: “When Jesus saw it, He was indignant and said to them, ‘Let the little children come to Me’” (Matt. 19:14).

Now, Jesus got frustrated with His disciples a lot. He was disappointed in their level of understanding several times. But this is the only time in the Bible where He is “indignant” with them. Evidently, there was something about this whole scene, chaotic as it undoubtedly was, that made the Son of God really, really angry.

There are a lot of conclusions we can draw about that. We can know, for example, that there is a special place in the heart of Jesus for children. We can also know that Jesus loved the parents, and He knew that denying the children meant casting away mom and dad. And we can know that Jesus was angry because no one—not even the smallest baby—is outside of His providential care.

But we can also see from here that Jesus was angry because the disciples had missed something crucial about the nature of the kingdom of God and what it means to receive it: “Don’t stop them, for the kingdom of God belongs to such as these. I assure you: Whoever does not welcome the kingdom of God like a little child will never enter it” (Luke 18:16).

It seems that for all the   in knowledge, understanding, and proximity to Jesus the disciples had done, they really hadn’t moved much past square one. In fact, these children were closer to understanding what it means to come to Jesus and embrace His kingdom than the disciples were. The same thing is true for us.

If we want to grow up in Jesus, then it seems we must grow down and become more like children. But that presents a problem, doesn’t it? What I mean is, it seems that the Bible combines faith and children in both a positive and a negative way. In the passage above, it’s clearly positive. Jesus says that the kingdom of heaven is made up of people like the children. And yet Paul seemed to argue just the opposite: “When I was a child, I talked like a child, I thought like a child, I reasoned like a child. When I became a man, I put childish ways behind me” (1 Cor. 13:11). It seems like the Bible is speaking out of both sides of its mouth, or at least that Jesus and Paul disagree. Jesus was teaching that entering the kingdom of heaven is about having faith like a child; Paul seems to say that growing in Christ is about putting away childish ways.

Let’s frame it another way—maybe there is a difference between “child-like” faith and “childish” faith. That is to say, a childish faith is a mark of immaturity as a Christ-follower. But child-like faith is a mark of depth. In fact, you could perhaps say that the disciples were marked by childish faith and what they needed was to become more like the very ones they were so eager to turn away.

What an amazing thing to consider, and how very much like the kingdom of God. For it’s in the kingdom of God that the persecuted are blessed; the hungry are made full; the mourner rejoices. And it’s in the same kingdom that we learn how to be a grown up in Christ by looking at the simple, beautiful faith of a child that comes unselfconsciously to Jesus over and over again.

Read more about developing a child-like faith in Michael Kelley's book Growing Down.

Michael Kelley lives in Nashville, Tenn., with his wife, Jana, and three children: Joshua, Andi, and Christian. He serves as the Director of Groups Ministry for LifeWay Christian Resources. As a communicator, Michael speaks across the country at churches, conferences, and retreats, and is the author of Wednesdays Were Pretty Normal: A Boy, Cancer, and God; Transformational Discipleship; and Boring: Finding an Extraordinary God in an Ordinary Life. 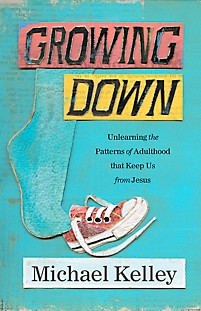 True maturity, according to Jesus, is entering the kingdom of heaven like a child. In Growing Down, Michael Kelley wrestles with Jesus’ words that the kingdom of heaven belongs to the likes of little children. If that is true, then we must grow down in characteristics that make us functional and effective adults, if we want to truly grow up in Christ.