Tribalism and the Image of God

This is the imago Dei restored to humanity: a diverse community united in worship together.

Yet they’ll be united in their worship of the Lamb of God, who tore down the hostility that separated them. Because tribalism, racism, and division are sewn into the fabric of human history and culture, we need to see this newfound cross-centered unity as nothing short of a miracle whenever it emerges. This is a snapshot of the imago Dei restored to humanity: a wildly diverse community of people united in worship together.

One of the most remarkable miracles in all of the New Testament isn’t often recognized and isn’t an obvious miracle. It happened many times, though, starting, perhaps most notably, when Jesus encountered a Roman centurion who asked for his help:

"When he entered Capernaum, a centurion came to him, pleading with him, “Lord, my servant is lying at home paralyzed, in terrible agony.” He said to him, “Am I to come and heal him?” “Lord,” the centurion replied, “I am not worthy to have you come under my roof. But just say the word, and my servant will be healed. For I too am a man under authority, having soldiers under my command. I say to this one, ‘Go,’ and he goes; and to another, ‘Come,’ and he comes; and to my servant, ‘Do this!’ and he does it.” Hearing this, Jesus was amazed and said to those following him, “Truly I tell you, I have not found anyone in Israel with so great a faith. I tell you that many will come from east and west to share the banquet with Abraham, Isaac, and Jacob in the kingdom of heaven,” (Matthew 8:5-11).

Because modern readers don’t always have all of the , it’s often difficult for us to imagine what these accounts must have sounded like to the first readers of the New Testament. So as we think about the imago Dei (the image of God) in others, it’s important to recognize the hostility that existed between Jews and Romans and, more generally, among the various ethnic and tribal identities mentioned throughout the New Testament: Jews, Greeks, Barbarians, Scythians, slaves, and free men.

The centurion’s faith was an early sign of the later influx of Gentiles into the kingdom of God. Tribal hostilities, birthed in the fall of humanity, would be put to death as people from all ethnic groups were reconciled and united in Christ.

With tribalism people draw hard borders around their communities. You’re either in or out, a member of the tribe or other, and rarely—then or now—are those tribal boundaries crossed.

Yet in this dialogue between Jesus and the centurion, that’s precisely what happened. In faith the centurion went to Jesus, a Jew who occupied a much lower position on the social ladder than this high Roman soldier, and asked Him for help. It was an act of both faith and great humility.

Jesus, in turn, responded with amazement. The centurion’s faith was an early sign of the later influx of Gentiles into the kingdom of God. Tribal hostilities, birthed in the fall of humanity, would be put to death as people from all ethnic groups were reconciled and united in Christ.

"[Jesus] is our peace, who made both groups one and tore down the dividing wall of hostility. In his flesh, he made of no effect the law consisting of commands and expressed in regulations, so that he might create in himself one new man from the two, resulting in peace. He did this so that he might reconcile both to God in one body through the cross by which he put the hostility to death. He came and proclaimed the good news of peace to you who were far away and peace to those who were near. For through him we both have access in one spirit to the Father. So then you are no longer foreigners and strangers, but fellow citizens with the saints, and members of God’s household," (Ephesians 2:14-19).

God creates “one new man” (v. 15) by tearing down “the dividing wall of hostility” (v 14). Paul wasn’t saying our ethnic, racial, and tribal differences are erased in the body of Christ. Even in the restored heaven and earth, a host of “peoples, tribes, languages, and nations” (Rev. 11:9) will gather before the throne, still recognizable for their distinctiveness. Yet they’ll be united in their worship of the Lamb of God, who tore down the hostility that separated them. Because tribalism, racism, and division are sewn into the fabric of human history and culture, we need to see this newfound cross-centered unity as nothing short of a miracle whenever it emerges. This is a snapshot of the imago Dei restored to humanity: a wildly diverse community of people united in worship together.

This unity is the way the world was meant to be. It has its origins in the unity of God Himself, whose community in the three-in-one Trinity is the model for all human community. This relationship is marked by difference—each member of the Trinity is distinct in His role and relationship with one another—and by unity. And when They created us, They made us in Their image: “Let us make man in our  image, according to our  likeness” (Gen. 1:26, emphasis added). Humanity is meant to reflect the Trinity as a whole, not just one member of it, and we can’t do that alone. It’s in community that we best reflect the image of God as we embrace and encourage one another in love.

This is a snapshot of the imago Dei restored to humanity: a wildly diverse community of people united in worship together.

The way these realities coexist is something of a mystery, but so is the kind of unity described in the New Testament. Every saved person retains his or her particularity—his or her place in the world and sense of personal identity—but gains a deeper identity that brings unity among believers. The Holy Spirit makes us alive in Christ and members of one family created by Christ’s blood. This Spirit-created family has deeper roots than any other human family.

In light of our shared identity in Christ, the Bible calls for tremendous respect for other image bearers. First and foremost, they deserve respect and dignity because they’re inherently worthy of respect as people made in the image of God. The Bible directly connects the sin of murder to the image of God and calls for the highest possible punishment for it (see Gen. 9:6).

Likewise, James identified the sin of cursing others as a sin against the image of God:

With the   we bless our Lord and Father, and with   we curse people who are made in God’s likeness, (James 3:9).

We can’t claim to love God and despise people made in His image. Jesus’ great commandment derives from the imago Dei (see Matt. 22:37-39). We love God with all our hearts because He’s infinitely worthy of love. We love ourselves—meaning we respect our dignity and our inherent worth—because we know we’re made in God’s image. And with the same   we embrace others, respecting their inherent dignity because they too are made in God’s image.

Mike Cosper served for sixteen years as one of the founding pastors at Sojourn Community Church in Louisville, Kentucky. He started Harbor Media in 2016. He’s the author of the Bible study Imago Dei and several books, including Faith among the Faithless: Learning from Esther How to Live in a World Gone Mad, The Stories We Tell, and Recapturing the Wonder: Transcendent Faith in a Disenchanted World. He and his wife, Sarah, live in Louisville, Kentucky, with their daughters, Dorothy and Maggie. You can follow him on Twitter @MikeCosper. 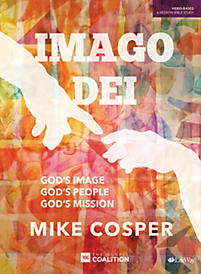 People are naturally compelled to ask questions of identity: Who am I? What am I worth? Why am I here? The answers culture offers only lead to more questions. To properly answer these questions, we need to look all the way back to the beginning—to our creation—and see that all people are made in the image of God.

Having a well-rounded view of the imago Dei will help us better understand ourselves, God, and the restoring work of salvation that comes to us through Jesus Christ. We can understand what God intended the imago Dei to be, how sin corrupted it, and how Jesus restores it through the power of the cross and the indwelling presence of the Holy Spirit.

Finding Manna in Your Wilderness

This entire planet is about wilderness, but God is about manna. The journey of life is not a matter of finding our way out of the wilderness but finding the manna inside the wilderness.

Why You Should Pursue Jesus' Righteousness

Only Jesus' perfect righteousness can redeem our hearts.

What Keeps You From Breaking Through In Life?

God created you with unique potential and placed you on planet Earth for a specific purpose. But what keeps you from breaking through into that potential?

Imago Dei examines the image of God biblically within the grand narrative of Scripture, relationally as it applies to ourselves and others, and in our service to others and in our obedience to the Great Commission.