Our new look is only the beginning. Learn more.
Free shipping on books, Bibles, gifts, VBS, and church supplies of $50 or more.View Details.

Award-winning author and former atheist, Lee Strobel shares how his rocky relationship with his dad affected his spiritual journey.

For better or worse, our past shapes us. The choices we make as adults are often colored by the decisions our parents made. For former atheist Lee Strobel, his father heavily influenced his decision not to believe in God.

Strobel was an unwelcome surprise for his dad from the beginning: "I was always trying to achieve things to impress him and earn his love, but I felt like I fell short," Strobel said. The night before his high school graduation, their difficult relationship exploded.

"He told me he didn't have enough love for me to fill his little finger," Strobel said. After that heated conversation, Strobel stormed out of the house, planning never to return.

That summer, he worked as a reporter for a local newspaper and lived 50 miles from his childhood home. At the insistence of his mother, the 18-year-old returned home briefly before heading off to college, but he and his dad never discussed the incident. They were civil to each other, but the two men never fully reconciled before his father's death.

Strobel set his sights on a career in journalism and never looked back.

If you had asked Strobel in the late '70s if he believed in a loving, all-knowing God, he would have readily denied His existence. Strobel was an award-winning legal editor at The Chicago Tribune, a position he held for 14 years. He was a formally trained writer with a journalism degree from the University of Missouri and a law degree from Yale.

Strobel, the Ivey Leaguer lived his life based solely on proven facts. He was well respected in his field and had no need for organized religion. Logic ruled his every decision. That is, until his wife—a self-proclaimed agnostic—converted to Christianity. When his wife first began attending church and talking about Jesus, he thought his marriage was over.

Little did he know it would be her conversion that would become the catalyst that would change the trajectory of his own life forever.

Researching the Life of Christ

"After my wife became a Christian, I began to see positive changes in her character and values," he said, noting he observed a marked difference in the way she treated people and cared for others. He decided it was time to put his professional investigative skills to work in his personal life, so he began to research the life of Christ.

"As someone trained to deal with facts and logic, I wasn't willing to put my faith in wishful thinking or make-believe. I needed solid evidence that Jesus is, indeed, the unique Son of God," he said. "Based on scientific evidence, I became convinced that there's a Creator of the universe; and based on historical data, I became confident [in] Jesus' claim to be the Son of God. [He] backed up that claim by returning from the dead."

Strobel officially became a Christian in 1981, certain the gospel was true. After years of trying to win his own father's love, he realized he didn't have to earn the love of Christ—it was freely given.

"Christianity is the only world religion that is built on grace rather than a system in which people try to work their way to God," he said. "God's grace is an inexhaustible topic that has so many implications for our life and eternity."

Finding Common Threads in the Past

Looking back, Strobel feels his challenging relationship with his father inevitably contributed to his years of atheism, and as with most things in his life, he has the facts to prove it. "Research has shown that a common thread among many of the most influential atheists throughout history has been a damaged relationship with their dad," he said.

"At the same time, polling shows that spiritual skepticism is on the rise. While the data can't prove a direct correlation, the trends are clear. I believe there's a connection. A child's relationship with [his] dad often creates a template for how [he] will relate to God."

That's why Strobel pledged to become a Christlike role model for his own children.

Strobel's Children and Their Fondness for Writing

Both of Strobel's kids took after their dad with a penchant for writing. His daughter, Alison, has authored six novels and co-authored two children's books.

In addition, his son, Kyle, has written books on Jonathan Edwards and spiritual formation and holds a Ph.D. in theology and two master's degrees.

"I had several teachers encourage me with my writing when I was young, and this was foundational for me, so we tried to fan the flames of our children's interest in reading and writing," he shares. "Leslie [my wife] and I are their biggest cheerleaders."

Surviving a Dark Season of Life

In August 2011, the roles reversed and Kyle became a bit of a cheerleader for his dad as Strobel faced one of the darkest periods of his life. After an allergic reaction to dye injected into his veins to probe a heart issue, Strobel's health began to mysteriously decline at a rapid pace. At one point, he even lost consciousness with doctors saying he was one step away from a coma that could be fatal.

"In the midst of all this, I became convinced that everyone—including God—had abandoned me," Strobel confesses. "Even though that's irrational, I thought it was true because I was not thinking clearly at the time."

His adult son stepped in to remind his father of the very faith he had literally staked his life on. "[He] came to me and led me through a long prayer in which he reconnected me with God," Strobel said. "It was remarkable .... He helped me strip away all the peripherals of my life until all that was left was me standing before my Heavenly Father who loves me so much He adopted me as His son. It was amazing to have my own son minister to me in this way."

Exploring a Case for Grace

Among other stories, Strobel shares his experience in-depth in his new book, (ITAL) The Case for Grace, his most personal and transparent work to date. "I tell the compelling stories of people whose lives have been so radically revolutionized that I can only attribute the change to the work of God in their lives," he says. "Each of these astounding stories illustrates a different facet of God's incredibly gracious character.

"When Jesus addressed the topic of grace, He didn't give a treatise on the topic; instead, He told the story about the prodigal son," Strobel continues. "I believe stories can shine new light on God's mercy, love, forgiveness and power to transform us."

As he's experienced the power found in the stories of others, he's become more willing to share his own. "More than any other book I've written, I've been vulnerable and transparent in this book about some of my experiences before and after I received Christ as my Lord and Savior," he reveals. "It was a risk I took in the hope it would encourage readers in their own faith journey."

As for those still on the fence, Strobel encourages non-believers to investigate Christ and His teachings for themselves. After all, as he discovered, the truth is waiting for those brave enough to seek it. And the best news about Christianity? Once we accept Jesus, our past no longer defines us. 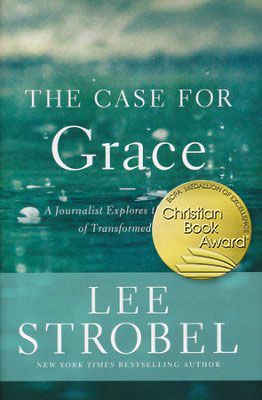 The Case for Grace: Lee Strobel draws upon the inspiring stories of everyday people, as well as never-before-told details of his own journey from atheism to Christianity, to explore the depth and breadth of God's redeeming love.

Through his unique investigative approach and story-telling ability, you will see how God's grace can similarly revolutionize your eternity and relationships starting today.

More Articles Recommended for You

An Open Letter to Dads from Tony Dungy

Former NFL coach and best-selling author, Tony Dungy, opens up about his experiences as a father, and shares vital wisdom for all dads.

In my father's opinion, I never met his expectations. But over time, God softened his heart and miraculously, he changed from within.
Lindsay Williams is a full-time freelance writer and editor based in Nashville, Tenn. She contributes to a variety of print and online media outlets, including HomeLife, ParentLife, Homecoming, and Nashville Lifestyles magazines, UPTV.com and Crosswalk.com, among others. She blogs regularly about Christian music at The Sound Opinion.