The Story of Experiencing God

Look to see where God is working and join Him.

When people truly experience the living God, they tell everybody what He's done in their lives. Many have come to faith in Christ through the Experiencing God Bible study. Others have experienced healing and the abundant life Jesus came to give.

Kareem was a graduate student from North Africa working on a Ph.D. in biology. Bob, his professor, witnessed to him on numerous occasion; but because he was a moral man, Kareem saw no need for a Savior. He did start going to church with Bob though. The church offered a men’s Bible study using Experiencing God: Knowing and Doing the Will of God that I had written with Henry Blackaby. Kareem decided to join.

Bob’s first thought was, He’s not even a Christian; this won’t make sense, but next he thought, What could it hurt? About 10 weeks into the study, Kareem came to Bob in the laboratory and said, “I have to confess.” Bob assumed he must have broken some lab equipment. “No, I must confess Christ.” “Kareem,” Bob asked, “all the times I’ve talked with you, you never saw a need for Christ. Why now?”

"I see these men in our class are experiencing God," Kareem responded. "I know I can't experience Him that way without a relationship with Him."

So, he made a public profession of his faith in Christ. Next, he needed prayer. His parents had arranged his marriage to a woman back home in North Africa. The church prayed. Soon, he began to receive letters from his future bride where she was quoting Scripture to him. She had come to faith in Christ and was praying for Kareem. I don’t know who came to Christ first, but half a world apart, both experienced God.

I first met Henry Blackaby in 1986, as he spoke at a conference in Georgia. Unexpectedly, he was asked to speak on the topic of knowing and doing the will of God. Avery Willis, my manager, and I realized God had entrusted to Henry a very significant message for the body of Christ. We began working with Henry to capture this life-message so it could minister to people far beyond Henry’s ability to present it in person.

Henry had studied the way God worked with people throughout Scripture to accomplish His purposes. He used the story of God’s call of Moses at the burning bush to illustrate God’s work in and through an individual to accomplish His purposes. He would draw a diagram and explain the process. We summarized the process in the “Seven Realities of Experiencing God” diagram.

In John 5:17, 19-20, Jesus described the way He came to know and do the will of His Father: “My Father is still working, and I am working also. … Truly I tell you, the Son is not able to do anything on his own, but only what he sees the Father doing. For whatever the Father does, the Son likewise does these things. For the Father loves the Son and shows him everything he is doing, and he will show him greater works than these so that you will be amazed.”

Henry summed up Jesus’ approach for us: “Look to see where God is working and join Him.”

In October 1990, we released the first edition of a work-book titled Experiencing God. We couldn’t have imagined what God would do with this message. In the past 30 years, it has sold more than eight million copies in various English editions. Translated into probably 60 or more languages, Experiencing God has spread all over the world. Trans World Radio even developed the message into radio programs and broadcast them as a radio discipleship tool in Arabic, Spanish, Russian, Chinese, and English. Because the message was so clearly biblical, people of nearly every Christian denomination we know have used it.

The love relationship is critical for all the other realities. Jesus described the love of the Father for the Son. Because of that love, the Father revealed what He was doing so the Son could be involved in the Father’s work. That’s exactly why we need a healthy love relationship with our Father. He longs to work through us, so we, and those around us, can know God by experience as He accomplishes God-sized things.

"People experience God and they tell everybody what God has done. … many have come to faith in Christ as they realized they didn’t have a personal relationship with Him. Others have experienced God’s healing touch and they now experience new dimensions of the abundant life Jesus came to give."

Experiencing God is about a real experience with God. This is one reason it has been so well received. People experience God and they tell everybody what God has done. Like Kareem, many have come to faith in Christ as they realized they didn’t have a personal relationship with Him. Others have experienced God’s healing touch and they now experience new dimensions of the abundant life Jesus came to give.

I couldn’t begin to tell you all the ways we’ve seen God work through common ordinary people like us. A huge impact has come in prisons like the Louisiana State Penitentiary at Angola (formerly one of the bloodiest prisons in America). In 1995, inmates began using Experiencing God. A seminary extension program began training them to lead the more than 20 churches within the prison. Inmates began leading other inmates to faith and discipling them. Today more than half the inmates are Christians, and Angola is one of the safest prisons in America. Baylor University Research describes the change as “identity transformation.” Inmates have been rejected, condemned, and cast off by society as worthless. Then they come to faith in Christ and realize God created them for a purpose. They cultivate a relationship with God that changes everything. They realize they have a meaningful purpose for living to minister to others.

I met a former diplomat in South Africa who had served at the time Apartheid ended. He had been introduced to this message by some missionaries in another country where he served. He came back to South Africa and began using Experiencing God to train new diplomats who would represent their country through Christ-transformed lives.

A South African banker told me about a visitor from another African nation who was planning a military coup to overthrow the corrupt government in his homeland. After the 12-week study of Experiencing God, he sensed God telling him to seek a political and peaceful strategy to spare the lives of the hundreds of thousands of people who would have died in the conflict.

One church began 27 ministries after studying Experiencing God. With confirmation from the church body, people realized God was calling them to far more than the traditional church programs. Churches have experienced a new unity. Ordinary people have recognized God’s call, responded to that call, and experienced God working mightily in their businesses, homes, marriages, and communities.

By the mid-1990s, international missions leaders identified an “emerging pathway” to the call to missions. Over half the new missionaries testified to sensing God’s call to missions as they studied Experiencing God in church groups. Again, the course isn’t the key. God is the key. We encourage people to enter the love relationship with God, learn to hear His voice, and respond in obedience. God has called people to things we would never have dreamed to ask.

In the early days, I remember standing with Henry Blackaby when a prominent Southern Baptist leader came up with tears steaming down his face. He said, “Henry, if I had only known this 30 years ago my entire ministry would have been different.” All his outward human success didn’t make up for missing out on what he could have experienced of God.

I remember one broken pastor weeping as he asked, “Why are we just now being told these things?” Henry responded by encouraging him to rejoice that God has now chosen to reveal these truths.

I completed seminary and experienced some failure in ministry as I tried to do things for God. When I met Henry and learned this message, I experienced a 180-degree shift in ministry perspective and fruitfulness as I began to join God in what He was doing. I wished someone had taught me these truths a decade earlier.

Not long ago, I introduced Experiencing God to 52 college students who were serving as summer staff for a Christian camp. Many of them were considering missions or ministry as vocations. Of the 52, only two had even heard of the course. On another occasion, I spoke to 35 seminary students, most of whom had never been introduced to this message. I tried to warn them not to follow my path of ministry failure by depending on my human reasoning and resources and missing the experience of God’s presence and fruitfulness.

If you've experienced God and understand this message, don’t allow a new generation to miss experiencing Him. If you haven’t experienced God in these real and significant ways, you can start right now. God desires to revive His people as His life flows through them to change the world. Let’s watch to see where God is working around us and join Him.

This article was originally published in HomeLife magazine.

Claude King, retired from Lifeway Christian Resources, is the coauthor of Experiencing God, The Mind of Christ, Fresh Encounter, and Growing Disciples. He holds degrees from Belmont University and New Orleans Baptist Theological Seminary. He and his wife live in Murfreesboro, Tennessee.

Understanding God's Unconditional Love for You

God loves to be loyal to His promises and His covenant people. We may not tend to think of loyalty as love—due to our language deficit—but think of God the Father, who is always loyal to keep His promises.

Why Trust the Gospels?

How do we know we even have the right Gospel texts and that their message hasn’t been lost in translation?

Why Christians Should Welcome Skeptics

The world is filled with untrusting Thomases who need to experience Jesus as true and trustworthy. The church shouldn’t shun them, or scold them, or shame them. Jesus isn’t afraid of skeptical human scrutiny.

Making Sense Out of Revelation

Revelation is one of the most difficult books of the Bible to understand with  all of its intricacies, and yet the main themes are clear: worship God and the Lamb, Jesus the Messiah. Trust and obey them. 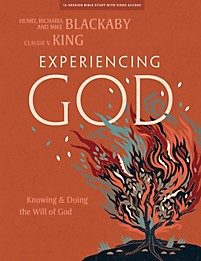 God is inviting you into an intimate love relationship through which He reveals to you His will, His ways, and His work. When you recognize where God is working, you can join Him in what He is doing. Carefully listening to His voice will anchor you in His plan, and set you free to live it with boldness and freedom. Then you will experience God doing through you what only He can do.

Read a FREE sample of the study.

The Seven Realities of Experiencing God

1. God is always at work around you.

2. God pursues a continuing love relationship with you that is real and personal.

3. God invites you to become involved with Him in His work.

4. God speaks by the Holy Spirit through the Bible, prayer, circumstances, and the church to reveal Himself, His purposes, and His ways.

5. God’s invitation for you to work with Him always leads you to a crisis of belief that requires faith and action.

6. You must make major adjustments in your life to join God in what He is doing.

7. You come to know God by experience as you obey Him and He accomplishes His work through you.