Discover the Story Behind 'I Can Only Imagine'

Bart Millard of MercyMe penned the song the film was based on, telling the story of how God radically transformed the life of his once abusive father.

MercyMe’s crossover hit, “I Can Only Imagine,” has touched millions of people around the world. But few know about the pain, redemption, and healing that inspired it. Bart Millard, award-winning recording artist and lead singer of MercyMe, shares how his dad’s transformation from abusive father to man of God sparked a divine moment in music history.

John Michael Finley portrays Bart Millard of MercyMe in the film, "I Can Only Imagine," now available on DVD.

MercyMe’s crossover hit, “I Can Only Imagine,” has touched millions of people around the world. But few have known the truth about about the pain, redemption, and healing that inspired it until the release of the hit movie of the same name. Bart Millard, award-winning recording artist and lead singer of MercyMe, was inspired to write the song after witnessing how God radically transformed his father's life from an abusive person to man of God.

Watching the movie is like going behind the scenes of Bart’s life to discover how God repaired their broken family, prepared Bart for eventual ministry through music, and wrote the words on his heart that would change his life forever — and become a song loved by millions. "I Can Only Imagine" gives you a front-row seat to God’s presence throughout Bart’s life.

Read this excerpt from Bart’s memoir that chronicles his story and inspired the film:

I looked at Dad lying in that hospital bed and thought about what must be running through his mind and heart. I felt horrible for him. Something new was happening inside me: the anger in my heart was moving aside and making room for compassion. Sympathy welled up in me, along with my tears. I always knew my dad was physically strong, but in the days that followed, a different strength emerged in him. When Dad went to church before, it had been for social reasons: he wanted to be around other singles and have a group to spend time with. Now going to church was completely about the Lord, not the ladies. He also became gentler, more compassionate. The bottom line? Somehow, my dad was changing for the better. It was as though whatever had happened to his mind years ago when he woke up after the truck accident had started to reverse when he woke up from the exploratory surgery. Years before, something had gone very wrong. Now—through a cancer diagnosis, of all things—something was finally going in the right direction for Dad . . . and for me.

An old saying goes, “The storms of life make you either better or bitter.” I guess Dad decided he had had enough of bitter and wanted to try better this time. We have all heard about angry, resentful people who get bad news that sends them even deeper into a chasm of disillusionment and disgust with life. But Dad started climbing out of the pit he had been in for so many years. Or maybe Someone was lifting him out and his heart was finally opening. Maybe he hit the proverbial bottom, looked up, and asked God for help.

Dad started climbing out of the pit he had been in for so many years. Or maybe Someone was lifting him out and his heart was finally opening. Maybe he hit the proverbial bottom, looked up, and asked God for help.

For as long as I could remember, Dad’s anger and pride had always gotten the best of him. He could never admit he was wrong. Now the anger began showing up less, the pride took a back seat to a new humility, and he began leaving room for others, including me, to have something to say. I made a decision, even at that young age, that I had to stop being afraid of my dad. I knew I had to step outside of what had been and start to see him as a hurting and suffering human being. I had to care about him in a completely different way. I was forced to grow up really fast when Mom left us; now I was forced again to go to another level—mentally, emotionally, and spiritually.

I took on more of a caretaker role in looking out for Dad, and, miraculously, that cleared the way for him to be more involved in my life. Our new common enemy of cancer moved us toward each other, to stand back-to-back and battle the disease together instead of going toe-to-toe, with me constantly trying to defend myself. Things were changing. When I checked on him at night to turn off his light, I would see his open Bible in his hands; he had fallen asleep reading it. We also started spending more time together.

Taken from I Can Only Imagine by Bart Millard Copyright © 2018. Used by permission of Thomas Nelson. www.thomasnelson.com.

Discover the vision and heart behind the making of the film in interviews with the creators, actors, and directors. Bart Millard of MercyMe, whose life the story is based on, also shares his hopes for the film. 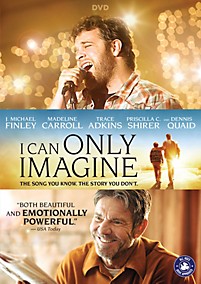 Watch 'I Can Only Imagine' on DVD.

The captivating story behind the bestselling single in the history of Christian music—and the man who wrote it. 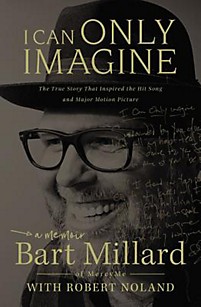 I Can Only Imagine: A Memoir by Bart Millard

The inspiring and unknown true story behind MercyMe’s beloved, chart-topping song that brings ultimate hope to so many. A gripping reminder of the power of true forgiveness.