Research: Many Churchgoers Not Open about Their Faith

A Lifeway Research survey of Protestant churchgoers identifies "Unashamed" as one of eight attributes of discipleship that consistently show up in the lives of maturing Christians. 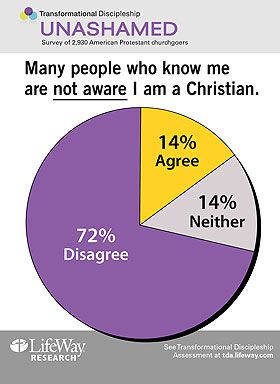 NASHVILLE, Tenn. — While many Christians know Scripture proclamations such as "For I am not ashamed of the gospel . . ." (Rom. 1:16), not all churchgoers are particularly transparent or open about their faith, research reveals.

A Lifeway Research survey of Protestant churchgoers identifies "Unashamed" as one of eight attributes of discipleship that consistently show up in the lives of maturing Christians.

Being unashamed connotes a boldness to stand for one's beliefs in conversation and lifestyle, explained Scott McConnell, director of Lifeway Research.

"There are two elements to this discipleship attribute: being unashamed of Jesus Christ around nonbelievers and showing transparency among other Christians," he said. "This transparency is seen when a mature disciple is open to spiritual accountability and willing to share about challenges with other believers.

"When the mature disciple is among non-Christians they are consistent in character and identity," McConnell said.

According to the survey, 66 percent of American churchgoers agree Christians should seek out honest feedback about their spiritual life from other Christians.

However, the survey also shows churchgoers often leave important elements of faith unspoken. Nearly a third (29 percent) agree "Spiritual matters do not tend to come up as a normal part of my daily conversations with other Christians," while 50 percent disagree this is the case.

Still, the survey reveals 57 percent of churchgoers agree they openly share about difficulties they are experiencing when they talk with Christian friends, while 1 in 4 do not.

"It is easy for Christians to put their 'church' face on at church and pretend everything is fine," McConnell said. "But without transparent interaction among followers of Christ, blind spots are left unattended and opportunities for change are unsupported."

Equally, "The other temptation for Christians is to pretend to be 'not-too-religious' when they are around neighbors and co-workers," he said. "Yet, Scripture calls believers to not be ashamed of the gospel and its work in our lives."

According to McConnell, "As we interviewed discipleship experts for the Transformational Discipleship research and asked them to define a disciple, most responded very simply, saying 'a disciple is someone who is a follower of Jesus Christ.'

"This research aligns with the biblical accounts of Peter's three denials of Christ with the ever-present struggle and temptation believers face to hide their relationship with Christ," he said.

McConnell pointed out the research uncovers several characteristics that best predict being unashamed, including reading the Bible more often. Other actions that predict more spiritual maturity in being unashamed include sharing with someone how to become a Christian, being discipled or mentored one-on-one by a more spiritually mature Christian, and having a habit of confessing sins to God.

To learn more about the transformational discipleship research visit LifewayResearch.com. The TDA is available at TDA.Lifeway.com.