8 Powerful Displays of Prayer in the Bible

How can changing your posture intensify your prayer life?

Is it necessary to bow when praying? Should we lift our hands? The Kendrick brothers give eight biblical prayer postures and why they're more important than we may think.

Is it necessary to bow when we pray? Should we lift our hands and kneel?

The answer is simple: prayer is not dependent on body positions.

God’s clear emphasis is not on externals but on the heart. Yet He’s created us to be a complete, unified whole—body, soul and spirit. All of our various components feed and affect all the others.

We hear of professional golfers who study with coaches to make even slight alterations in their stance or grip, hoping to achieve another fifteen yards off the tee or better control around the greens. How much more should we study the Word to see how our posture might intensify our praying?

To bow is a physical expression of honor and allegiance. The action of bowing is associated with worship. Even just the bowing of our heads communicates to our mind that we’re addressing the One to whom we’ve pledged our complete loyalty. When the Lord came down in a cloud around Moses on Mount Sinai, "Moses made haste to bow low toward the earth and worship" (Exod. 34:8). King David, centuries later, said, "As for me . . . I will bow down in reverence for You" (Ps. 5:7). Bowing is an appropriate posture of prayer.

Many other biblical references speak of dropping to our knees in prayer. Solomon’s monumental prayer at the dedication of the temple was given while he "knelt down in front of the entire congregation of Israel" (2 Chron. 6:13). Daniel, even at the risk of death for defying the king’s order against praying to anyone other than the king himself, continued kneeling three times a day at the open window of his home, "praying and giving thanks before his God" (Dan. 6:10). And one day, we’re told, "every knee will bow" before Christ—"in heaven and on earth and under the earth" (Phil. 2:10)—even those who refused to kneel before Him.

Sometimes bowing our heads or bowing on our knees still doesn’t quite reflect the devotion we intend. When Ezra the priest gave an all-morning, public reading of the law to the returned exiles in Jerusalem, "they bowed low and worshiped the LORD with their faces to the ground" (Neh. 8:6). Jesus, agonizing in the Garden of Gethsemane before His torture and death, "fell on His face and prayed" (Matt. 26:39). And when John later saw Him in His resurrected, glorified form — as described in the apostle’s Revelation on the island of Patmos — he admitted he "fell at His feet like a dead man," totally prostrate before the power of God (Rev. 1:17).

Many prayers from Scripture were made with uplifted hands. The idea of folding our hands, while meaningful, is actually more recent in history. But the Bible does talk about raising our hands—"the lifting up of my hands as the evening offering" (Ps. 141:2). Paul said, "I want the men in every place to pray, lifting up holy hands, without wrath and dissension" (1 Tim. 2:8). Both Solomon and Ezra, whom we mentioned earlier, prayed while falling to their knees and lifting their hands—at the same time—a position of total, physical worship and praise.

While closing our eyes is a good way of limiting distractions and maintaining focus in prayer, a common biblical expression was lifting the eyes toward heaven, like when Jesus "raised His eyes" before praying at the tomb of Lazarus (John 11:41), or when "looking up to heaven" as He blessed the five loaves and two fish before multiplying them for the crowd of five thousand (Luke 9:16).

Beyond physical postures, what we do with our voices in prayer is also important. Sometimes the best thing we can do in prayer is be still and know that He is God, without saying a word (Ps. 46:10). When awed and amazed, one is often in silence. When Hannah prayed in anguish for God to give her a child, "she was speaking in her heart, only her lips were moving, but her voice was not heard" (1 Sam. 1:13). No one could hear her silent prayer, but God heard and answered.

"Evening and morning and at noon I will pray, and cry aloud" (Ps. 55:17). This crying out is a frequent descriptor of prayers spoken in the Bible. Jesus, we’re told, during His life on the earth, "offered prayers and appeals with loud cries and tears to the One who was able to save Him from death, and He was heard because of His reverence" (Heb. 5:7). Various translations of the original words for crying out carry the idea of shrieking in pain, or making a sound like an animal in danger, or wailing with deep emotion of spirit. It’s intense and loud. Heavy and heartfelt. Nearly half of the times when John’s Revelation talks about words being spoken in heaven, they’re explicitly identified as a "loud voice"—20 times in its 22 chapters.

Our body sends signals to the rest of our system, reminding us we’re truly in His presence. Truly dependent on Him. Truly His servant. Truly worshipful. And if anything can help us stay this anchored and concentrated on Him, can it really be insignificant?

5 Symptoms of an Unhealthy Prayer Life

Author, actor and speaker Priscilla Shirer opens up about her personal prayer life, obstacles to healthy communication with God and ways to overcome them.

How to Pray for Your Family

Get practical advice on praying for your spouse along with prayer verses for your family.
Alex and Stephen are co-founders of Kendrick Brothers, a company that exists to honor Jesus Christ and make His truth and love known among the nations through movies, books, curriculum and speaking.

Shop for Books on Prayer 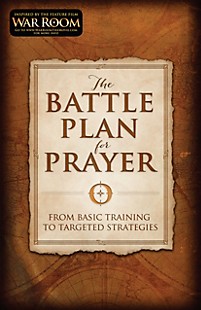 The Battle Plan for Prayer equips and encourages you to see prayer as your first wave of attack in every undertaking.