Jesus laid down His life for others–and His followers are called to do the same.

Many of us already knew that. Many of us have experienced God’s unusual ways. And we have certainly read about them in the Bible. We might even be able to quote Bible verses that explain or illustrate God’s strange ways.

Still, we are startled when we experience God’s unusual ways firsthand.

Our typical reaction is one of surprise. I wouldn’t have done it that way, we might think. Or I don’t understand why God would do that. God does not normally do what we would do. His ways are different. His sense of timing seems odd. The methods God uses to accomplish His purposes are often very difficult for us to understand.

Nowhere do we see that more clearly than in the central role that sacrifice plays in the activity of God.

If we had only been more careful with our reading of the Bible, we might have noticed it. Perhaps we were paying attention to other themes and patterns. After all, sacrifice is not something we are easily drawn to. But the theme of sacrifice is there on almost every page of both the Old and New Testaments.

Abram was invited to leave his country, his people, and his father’s household (Genesis 12:1). God called him to go to a land that he did not know, and in being sent to this new land, Abram was required to sacrifice all that he had, and all that he knew.

Sometime later, that same man (whose name had been changed to Abraham) was called to sacrifice even his beloved son, Isaac, in obedience to God (Genesis 22:1-19). God graciously intervened and provided an animal that would serve as the sacrifice, but that hard story challenges us to wonder if there is any limit to what God might ask of us.

In securing a place to build an altar to God, David insisted on paying for the land–even though it was offered to him freely (2 Samuel 24:18-25). David would not consider giving a gift to God that had no personal cost.

Esther found herself with the opportunity to save her people–at great risk to herself (Esther 4). She approached the king without an invitation, saying, “If I perish, I perish.” With Mordecai’s help, Esther understood that she was in a unique position and that she had been prepared “for such a time as this.”

Shadrach, Meshach, and Abednego defied King Nebuchadnezzar’s edict and refused to bow before the golden image (Daniel 3). Before being thrown into the blazing furnace, they declared their trust in God. They knew that God could deliver them if He chose to–but they affirmed their faith in God whether He rescued them or not.

When the angel Gabriel visited Mary and told her that she would give birth to Jesus, Mary responded with simple submission. “I am the Lord’s slave,” she said to the angel. “May it be done to me according to your word” (Luke 1:38). Mary’s response is so familiar to most of us that we often fail to see how costly that response would be for her.

Furthermore, Jesus celebrated the sacrifice of a widow who gave God everything she had (Luke 21:1-4) and He told a rich ruler to sell everything he had and give it to the poor (Luke 18:18-30).

If we need further evidence of the extent of the required sacrifice, we are told plainly in Ephesians 5:2 to “walk in love, as the Messiah also loved us and gave Himself for us, a sacrificial and fragrant offering to God.”

In the New Testament, we meet a follower of Jesus named Paul, a man who embodied a life of sacrifice. Describing his own ministry, Paul noted troubles, hardships, distresses, beatings, imprisonments, riots, hard work, sleepless nights, and hunger (2 Corinthians 6:3-10). He wrote to the Corinthians about being hard pressed on every side, perplexed, persecuted, and struck down (2 Corinthians 5:7-10). The conclusion is unavoidable: Paul would have had a very different life if he had not followed Jesus.

Even so, Paul’s various catalogs of personal sacrifices are not complaints. He gloried in the opportunity to suffer for Jesus, desiring only to preach Christ crucified (1 Corinthians 1:23), claiming “God’s weakness is stronger than human strength” (1 Corinthians 1:25), and embracing “the fellowship of His sufferings, being conformed to His death” (Philippians 3:10). Paul actually saw himself as joining in the sacrifice of Christ, explaining to the Christians in Galatia that he had been “crucified with Christ” (Galatians 2:19b).

Growing out of his own experiences of sacrifice and suffering, Paul invited others into the same life. He urged the believers in Rome to offer their bodies as “living sacrifices” (Romans 12:1), and he told the Christians in Philippi that they had been granted the high privilege not only to believe in Christ but also to suffer for Him (Philippians 1:29).

And we haven’t even mentioned John the Baptist or Stephen or Jeremiah. The list of biblical examples and illustrations of sacrifice could go on and on and on...

Clearly, sacrifice is a defining theme in the activity of God.

Excerpted and adapted with permission from The Insanity of Sacrifice by Nik Ripken. Copyright 2019, B&H Publishing Group.

Nik Ripken is the world’s leading expert on the persecuted church in Muslim contexts. He is a missions veteran of 30 years, having served primarily in North Africa and the Middle East. He is the bestselling author of The Insanity of God and The Insanity of Obedience. He and his wife have conducted extensive research on the persecuted church, and on Muslim background believers, in approximately 72 countries. 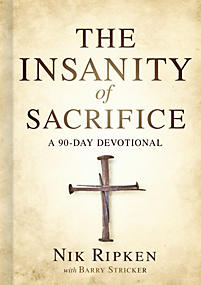 Bestselling author Nik Ripken, mentored by believers in persecution, offers The Insanity of Sacrifice, 90-day devotional to help you align your heart with God's, seeing the role sacrifice plays in the life of every follower of Jesus Christ. Through this book you will discover that your sacrifice can lead others, across the street and across the oceans, to discover new resurrection life in Christ.

The Warning Signs We Need to See

Before you read another word, you’ve got to get this: A lack of evangelism is always a big deal that always leads to an even bigger problem! Therefore, we should heed these warnings from the Lord and move forward toward faithfulness.

The Things You Say Matter

Our mouths are good for nothing greater than praising God. That’s because praising God is the ultimate purpose for everything God has made—everything from seraphim to people like us. And so He commands us in Psalm 113:1 to praise Him.

The Insanity of Sacrifice is a 90-day devotional studying the role sacrifice plays in the life of every Christian.