Healing the Guilt and Pain of Abortion

Abortion has taken a toll on individuals and society as a whole. The conversations of confession and healing must continue. This is a wounded and broken heart issue. We must continue to address the topic of abortion with truth and grace.

She dropped her head and drew her shoulders together. Her shaking fingers nervously tucked her skirt in tightly around her legs as she stretched the hem toward her knees and drew her feet up under the pew. She tried to make herself as small as possible. She grabbed for the makeup compact in her purse as she avoided eye contact with the pastor. He knew. Surely, he knew.

Why else would he be looking right at her as he quoted Scripture about how much God hates abortion? "The LORD hates six things; in fact, seven are detestable to Him: arrogant eyes, a lying tongue, hands that shed innocent blood, a heart that plots wicked schemes, feet eager to run to evil, a lying witness who gives false testimony, and one who stirs up trouble among brothers" (Proverbs 6:16-19). She knew how much God hated what she had done. She'd read the Scriptures a hundred times.

She knew she was one of the 43 percent of all women of childbearing age the pastor was talking about who had made the horrible decision to have an abortion. It was like living a nightmare. After all these years of not being in church, she'd finally made her way back and now she was hearing this message: Abortion is murder. Abortion is sin. God hates abortion. As she listened that day, she realized that all but one of the seven things God hates applied to her.

It suddenly occurred to her that she never saw the doctor's eyes. In fact, she'd never met him. He had come into the room of the abortion clinic only minutes before her procedure, but he'd worn a mask over his face.

Funny, he came in wearing a mask, and she left wearing one. It was an invisible mask, but it was a mask just the same — and she'd worn it for 17 years. As she listened to the sermon about abortion, she wanted to run out of the church doors but something kept her in her seat. It was the sound of that pastor's voice. There was a sound of gentleness and kindness in his words. He was sharing some hard stuff to hear but, as if he knew she was sitting there, he continued to wrap the truth about God's hatred of abortion in the truth that God loves people, people are sinners, and God is in the business of healing broken hearts. He said that this church was a safe place. He said that there were pastors to talk to and even a Bible study with other women who have suffered the heartbreak and shame of abortion.

Her Story. My Story.

This true story was shared with me recently at a Surrendering the Secret leader training I led in Ohio. Her name is Elaine — but it could have been Pat. I could have spoken these same words. I also sat in a church more than 30 years ago when I came face-to-face and heart-to-heart with my own sin of abortion. Unlike Elaine, I'd never heard what God said about abortion when it had been so passionately sold to me on the college campus. I was horrified to discover in my ignorance and my surprise that God even knew about my abortion. Like Elaine, I found my healing in the church. After a few months of running the other way, I finally shared the shame of my past abortion with a woman in my new church. The woman acknowledged that God did, in fact, hate abortion. And she immediately took me to Scripture that equally revealed God's redeeming love.

Little did I know that God would someday use the most shameful part of my past to unfold His plans for my future. God was about to use me to write a Bible study that would help thousands of women find healing from abortion.

Elaine responded to that wise pastor that day and called the church office to make an appointment. After sharing her story with one of the pastors, she started her journey through Surrendering the Secret with that same pastor's wife, who Elaine was shocked to discover, also had a past abortion. The two of them worked through the 8-week study together. Elaine's pastor understood that the generally accepted statistic of 43 percent of women of childbearing age having had a past abortion was just the beginning. He went on to discover that some statistics quote as many as 70 percent surveyed consider themselves Christians and decided that those who sat in his church would be given the opportunity to hear the truth.

It has been more than 40 years since the Supreme Court ruling of Roe v. Wade. Since then there have been more than 60 million abortions — that's 55 million children lost, and millions of women who will never be the same. The mission field created by abortion is huge. Though those of us who have experienced an abortion or who work with crisis pregnancy centers are well-versed in the devastation wrought by abortion, the media is strangely quiet about the after-effects. The Guttmacher Institute, the research arm of Planned Parenthood, shares that women report being relieved immediately after having an abortion. However, numbers of women suffer from a form of post-traumatic stress as a result of their abortion, which usually doesn't set in until later. A study published in the British Journal of Psychiatry found that women who have an abortion are 81 percent more likely to have subsequent mental health issues. We have a 261 percent increased risk of alcohol misuse and a 313 percent increased risk of drug misuse.

Guttmacher has quoted that nearly 40 percent of women surveyed after an abortion indicate they are Protestant Christians and more than half are Catholic. Let's do the math. Sixty million women at 70 percent equals more than 40 million woman who could be sitting in our churches today who have experienced a past abortion.

What is your church doing to reach them?

In a past American Family Association Journal article, David Platt confesses to have been "shamefully passive" about the topic of abortion until some of the women in his church began to journey through the Surrendering the Secret Bible study. Platt's heart was stirred to take action by the women in his own church who came forward with their "deep scars emotionally and relationally to experience the healing that the gospel provides when it comes to past abortions." Platt was inspired to speak about abortion combining biblical truth balanced with spiritual care for the soul. The women in his church have responded and are being set free from the heartbreak of past abortions, and future generations are being protected.

A Generation Yet to Be Born

"They will come and declare his righteousness; to a people yet to be born they will declare what he has done" (Psalm 22:31). In the 10 years since Surrendering the Secret was published, there's been a shift in the abortion climate in the United States, Change is on the horizon as evidenced not only by a passionate embrace of post-abortion ministry by the church throughout the country but a substantive shift in abortion regulation and legislation. New advocates and organizations are harnessing social media and business techniques to bring the message of life to a greater audience.

Pastors and churches are starting to have the hard conversation about abortion and the toll it's taken on individuals and society as a whole. The conversation must continue. This is a heart issue — a wounded and broken heart issue — and pastors must continue to address the topic of abortion with truth and grace. Women facing an unplanned pregnancy have to be given a better option and equipped with resources in order to be successful. The local pregnancy resource center stands in the gap for these families. If we claim Christ and stand for life, we can partner with these centers, provide our time, our talent, and our treasure. And for the women who have had an abortion, the church can be a safe place of acceptance and healing, where they can rebuild their lives around Christ without fear of condemnation from the congregation. Offering Bible studies like Surrendering the Secret may be a small step for a church, but it's a huge step for the post-abortive woman.

It's thrilling to see the message of Surrendering the Secret experience international grow through the church. We are excited and inspired through our non-profit ministry with a vision to see the Church across the world embrace the ministry of healing the heartbreak of abortion.

Additional materials designed for men and couples are available through our STS Trained Leadership Team. Training opportunities for churches and leaders are available at surrenderingthesecret.com. 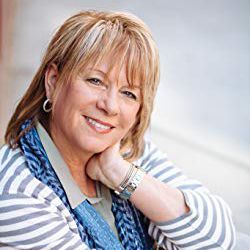 Pat is a passionate and inspiring author, speaker and leadership coach who has founded a variety of organizations during her 25 years in full time ministry including one of the nations largest pregnancy resource centers, an international post abortion recovery program, an adoption agency and a national woman’s ministry called AWoman’s Quest. Her best selling post abortion recovery bible study Surrendering the Secret was released by Lifeway in 2009. Her latest book Life Unstuck: Finding Peace with Your Past, Purpose in Your Present and Passion for Your Future was released in 2015. She and her husband Mike have been married for over 40 years and have 3 married children and 5 “G’s”. They enjoy traveling, doing ministry together and a sweet tea home in the North Georgia Mountains. Visit her website at www.patlayton.net for more information 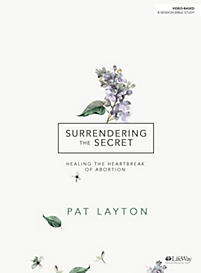 Many women carry a great burden of shame and failure, afraid to reveal their hidden pain, and by doing so are forced to endure the long-lasting effects in isolation. Surrendering the Secret allows women to release this burden and find freedom through community while experiencing hope and joy, as shame and failure are replaced with beauty.