Has Your Heart Become Hardened?

Discover what the parable of the soils has to teach us about the condition of our hearts.

Jesus often used familiar concepts to explain unfamiliar spiritual truths. In the parable of the soils, Jesus identified four potential types of soil that represent the human heart and He explained the parable in further detail.

Human beings love stories. As children, our parents and teachers read stories to us as we listened attentively. As we get older, our taste in stories matures, but we never outgrow our love for them. We wait with anticipation for new movies and new releases from our favorite authors — all because we love great stories.

Jesus was a master-teacher. He knew the power of a story, so it’s not surprising Jesus used stories or parables to communicate spiritual truths. Through the parable of the soils we can learn a lot about the condition of our human hearts.

"The same day went Jesus out of the house, and sat by the sea side. And great multitudes were gathered together unto him, so that he went into a ship, and sat; and the whole multitude stood on the shore. And he spake many things unto them in parables, saying, Behold, a sower went forth to sow; And when he sowed, some seeds fell by the way side, and the fowls came and devoured them up: Some fell upon stony places, where they had not much earth: and forthwith they sprung up, because they had no deepness of earth. And when the sun was up, they were scorched; and because they had no root, they withered away. And some fell among thorns; and the thorns sprung up, and choked them: But other fell into good ground, and brought forth fruit, some an hundredfold, some sixtyfold, some thirtyfold. Who hath ears to hear, let him hear."

Jesus often used familiar concepts to explain unfamiliar spiritual truths. In the first century, Jesus ministered in an agrarian culture, so it’s not surprising He  used a farming example to illustrate a spiritual principle. In the parable of the soils, Jesus identified four potential types of soil that represent the human heart and He explained the parable in further detail:

The four types of soils that Jesus mentions represent potential conditions of the human heart:

All of us have the capacity to have hardness in our hearts. A lot of times, that hardness is formed by people stepping on it. If you’ve had enough bad stuff go on, it’s natural for your heart to get hard. For some of us, the circumstances of our lives have made us hard. Maybe it was a bad relationship or situation. Maybe people did awful things to you. The problem with hard-heartedness is that there’s no room for the seed (which represents God’s truth) to get in at all. The seed sits on the surface and is exactly what the enemy Satan wants, because the Word of God can’t get in and change you. It sits on the surface and gets nowhere.

The problem with hardness of heart is that it’s not fruitful. Prayer will be a key factor in avoiding a hard heart. So you have to say, “Lord, will You do a work  on me? Lord, will You break up the hard areas of my life?” In our prayer life, we have to continually pray for spiritual growth and maturing. As we study of the parables, we’d do well to pray for our hearts to be open to God’s Word and fruitful for the kingdom of God.

Daniel Fusco is the lead pastor at Crossroads Community Church, which has campuses in Vancouver, Wash., and Portland, Ore. Daniel is a published author and a featured contributor to “Preaching Today.” He is also a sought after speaker and has taught at churches, conferences, retreats, youth rallies, leadership seminars, seminaries, and on campuses, both in the States and abroad. Daniel is blessed to be  married to Lynn. They live with their three children and a crazy dog in Southwest Washington.

Embrace the Newness of Christ in the New Year

Tthe reason we sing Advent carols about the birth of Jesus is because He came to die to free us. Christmas may be all about a monumental birth, but what the world so desperately needed was a sacrificial death.

Jesus’ Arrival Compels Us to Anticipate His Return

Jesus came to bring radical transformation to you and me. The world didn’t know it, but He was about to do something new. His first advent accomplishes everything we need in order to be prepared for His second.

This is the fifth in a series of devotional readings for the Advent season. Week Five focuses on the gift of the Christ child, and treasuring our encounters with the living God. 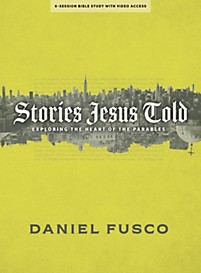 Join Daniel Fusco through six sessions as you discover how Jesus' parables not only form (or reform) who you are, but reveal more about God than you ever thought possible. You'll find the hope you’re looking for speaking above all the other noise you may be experiencing.