Put your trust in God. He never wastes our time or experiences.

Though I was able to try out for two NFL teams my plans for playing pro football had failed. But not my steps. God never stops directing our steps. Though “many plans are in a man’s heart,” as Proverbs 19:21 says, we’re not clairvoyant. We don’t always know what’s best.

Coming out of college, I think I would’ve been voted one of the least likely to ever become a coach. For one thing, as a player, I had a bad habit of griping about everything we were made to do. Complaining somehow made all the conditioning feel bearable. Plus, I was always asking questions, questioning what we were doing. Most of it came from a genuine desire to learn. I really wanted to understand why. But I think it just made me seem like a pain in the neck. So how did I get into coaching when it wasn’t in my plans?

When I look back to how it felt to be a graduating senior, closing the books on what had been a less than stellar collegiate playing career, I had no idea what to do next. My life had always seemed so clear-cut before. Middle school to high school, high school to college, college to ... now what?

Though I was able to try out for two NFL teams my plans for playing pro football had failed.

But not my steps. God never stops directing our steps. Though “many plans are in a man’s heart,” as Proverbs 19:21 says, we’re not clairvoyant. We don’t always know what’s best.

"Though I was able to try out for two NFL teams my plans for playing pro football had failed. But not my steps. God never stops directing our steps. Though 'many plans are in a man’s heart,' as Proverbs 19:21 says, we’re not clairvoyant. We don’t always know what’s best."

I never dressed for an NFL game with an NFL team, even though it’d been my dream from as far back as Boca High, and it remained my dream every day, out on those practice fields all that summer. But here’s what I know now that I didn’t know then. The same drills that I thought were part of my plan for reaching my NFL dreams were the same drills God was using to plan for my future. The same emphasis on footwork and technique that I thought was part of becoming a professional quarterback was actually how God was training me for becoming a quarterbacks’ coach. All those meetings I attended on pass protections and route concepts and timing and delivery — all to make me a better ballplayer, I thought — were the same meetings where God was working to help me become a play caller, a coordinator, eventually a head coach.

In other words, none of that time was wasted, even though none of it took me to the place where I’d been planning to go. Because, again, “the mind of man plans his way, but the LORD directs his steps" (Prov. 16:9).

And if I didn’t know the truth of that statement yet, I was about to find it out. In a big, big way.

Excerpted from Make the Call: A 40-Day Experience for Men © 2021 Lifeway Press.

Mark Richt is the former head football coach of the University of Georgia Bulldogs and University of Miami Hurricanes, and is currently a football analyst for the ACC Network. He and his wife Katharyn are the parents of four children, and live in Florida.

Place Your Trust in God

Confront the Lies You Tell Yourself with God's Truth

Turns out we are more influential in our own lives than we realize. Just one quick inventory of the thoughts that dominated our thinking can leave us confronted with the truth: We are what we think. 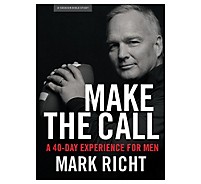 This Bible study for men, Make the Call, contains devotionals, Scripture, and reflective questions for 40 days of personal Bible study, plus guides for an eight-session small group experience. Author Mark Richt shares stories from both on and off the field, gives wisdom for life and leadership, and encourages you to make the most important call of all.

Read a free sample of Make the Call: A 40-Day Experience for Men.