Jesus Provided Perfect Atonement for Us

Jesus conquered death and rose again, proving Himself to be the only One capable of paying the price for our sins.

Jesus conquered death and rose again, proving Himself to be the only One capable of paying the price for our sins.

Even the most devout lovers of Scripture get a chill up their spines when they hear, “Let’s look at Leviticus.” Yet Leviticus gives us a richer understanding of who Jesus is, what Jesus did, and how spectacular His free gift of grace is.

Leviticus 16 describes the Old Testament sacrificial ritual that God required to atone—or make amends—for the Israelites’ sins on the Day of Atonement each year. Four animals were involved: a bull, a ram, and two goats. One goat was to be slaughtered and its blood splashed on the mercy seat, the covering of the ark of the covenant. It provided the blood that stood between the imperfection of humanity and the perfection of God. Because we’re sinful people, we deserve death. Graciously, though, God provided a way we wouldn’t have to pay that price. However, something else had to die in our place. On the Day of Atonement it was a goat. Its blood took our place on the mercy seat.

The other goat became a scapegoat that symbolically bore the sins of the people on its back. It was taken into a desolate place and released. This goat thus became sin for the people and carried their sin far away. The gruesomeness of this ritual, which had to be performed every year in addition to the daily sacrifices, reminded the people of the seriousness of sin and the gravity with which it must be regarded. It’s sobering to think that God’s feelings toward sin haven’t changed in the entire history of humankind. Sin—no matter how small—can be atoned for only with blood.

Hebrews 13:11-15 makes the connection between Leviticus and Jesus’ sacrifice for our sin. Like the blood of the bull, Jesus’ blood was spilled to stand between our sin and Holy God. Like the scapegoat, Jesus, as the perfect, sinless sacrifice, bore the sin of humankind on His shoulders. He was crucified on a hill outside the walls of Jerusalem, just as the bodies of the sacrificial animals had to be taken outside the walls of the Israelites’ camp.

Whereas a goat’s blood was once sprinkled on the ark to ritually appease God’s wrath for a year and another goat took the guilt of sin away, both facets of the ritual were realized on the cross. Jesus, however, wasn’t conquered by His death on our behalf. Rather, He conquered death and rose again, proving Himself to be the only One capable of paying the price for our sins once and for all and permanently bringing us into new, eternal life. Because of the greatest miracle of all time, we no longer have to engage in a system of sacrifice. The perfect sacrifice has already been offered on our behalf.

The Warning Signs We Need to See

Before you read another word, you’ve got to get this: A lack of evangelism is always a big deal that always leads to an even bigger problem! Therefore, we should heed these warnings from the Lord and move forward toward faithfulness.

The Things You Say Matter

Our mouths are good for nothing greater than praising God. That’s because praising God is the ultimate purpose for everything God has made—everything from seraphim to people like us. And so He commands us in Psalm 113:1 to praise Him. 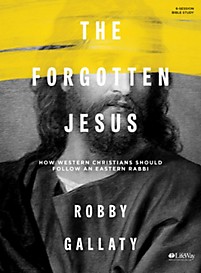 The Forgotten Jesus
by Robby Gallaty

This disciple-making Bible study takes you on a journey back to biblical times to rediscover who Jesus really was by seeing Him in the cultural and religious context of His day.. Exploring the implications of Jesus' teachings and actions as a first-century rabbi will give you new reasons to fall in love with Him all over again.