In a day when speculation about heaven runs rampant, I've found it both exciting and refreshing to carefully examine what Scripture says.

The Bible tells us much more about heaven than is often assumed. In a day when speculation and subjectivism about heaven run rampant, I've found it both exciting and refreshing to carefully examine what Scripture says.

I once heard a pastor make a startling confession: "Whenever I think about heaven, it makes me depressed. I'd rather just cease to exist when I die."

I tried not to show my shock as I asked him, "Why?"

"I can't stand the thought of that endless tedium. To float around in the clouds with nothing to do but strum a harp—it's all so terribly boring. Heaven doesn't sound much better than hell."

Where did this Bible-believing, seminary-educated pastor get such a view of heaven? Certainly not from Scripture, where Paul said to depart and be with Christ was "far better" than staying on earth (Phil. 1:23). And yet, though my friend was more honest about it than most, I've found that many Christians share the same misconceptions about heaven.

More than 30 years ago, I began studying what Scripture tells us about eternity and have written about heaven and the importance of an eternal perspective ever since. The Bible tells us much more about heaven than is often assumed. In a day when speculation and subjectivism about heaven run rampant, I've found it both exciting and refreshing to carefully examine what Scripture says.

1. Will we have bodies and live human lives?

Many people imagine that we will remain disembodied spirits in the afterlife and that heaven won't be a tangible, earthly place.

Given the consistent physical descriptions of the present heaven and those who dwell there, it seems possible—though this is certainly debatable—that between our earthly life and our bodily resurrection, God may grant us some physical form that will allow us to function as human beings while in that unnatural state "between bodies," awaiting our resurrection.

Just as the intermediate state is a bridge between life on the old earth and the new earth, perhaps intermediate bodies, or at least a physical form of some sort, serve as bridges between our present bodies and our resurrected bodies.

Revelation 21:1 says, "Then I saw a new heaven and a new earth, for the first heaven and the first earth had passed away." This eternal heaven, the new earth, is our true home, the place where we will live forever with our Lord and one another.

In my book Heaven, I explain biblically why I believe that on the new earth there will be natural wonders, animals, trees, rivers, cities, houses and architecture. We will laugh, eat and drink, tell stories, make crafts, build, garden, care for animals, play, enjoy sports and physically demanding activities and tend and manage and rule the earth.

We will collaborate, research, invent, read books and write them, create and perform dramas, compose music and perform it, all to God's glory. Why?

Because we will still be physical beings created in God's image, which means we are creative and intelligent. And, we will be restored to a new earth without sin and death—to fulfill God's original plan of stewarding the material universe to His eternal glory.

2. Will we still be ourselves with our memories of this life?

After Jesus rose from the dead, He said to His disciples, "‘Look at My hands and My feet, that it is I Myself! Touch Me and see, because a ghost does not have flesh and bones as you can see I have.' Having said this, He showed them His hands and feet" (Luke 24:39-40).

The resurrected Jesus did not become someone else; He remained who He was before His resurrection. And His old body was the same body made new. Our bodies will be the old ones made new, just as the new earth will be the old earth made new.

You will be you in heaven. Who else would you be? If Bob, a man on earth, is no longer Bob when he gets to heaven, then, in fact, Bob did not go to heaven.

If we weren't ourselves in the afterlife, then we couldn't be held accountable for what we did in this life. Judgment day would be meaningless. Scripture is clear that our own personal history and identity will endure from one earth to the next.

Sadly—even among christians—it's a prevalent myth that heaven will be boring.

Sometimes we can't envision anything beyond strumming a harp and polishing streets of gold. Satan's most basic strategy, the same one he employed with Adam and Eve, is to make us believe that sin brings fulfillment. However, in reality, sin robs us of fulfillment. Sin's emptiness inevitably leads to boredom.

Psalm 16:11 says, "You reveal the path of life to me; in Your presence is abundant joy; in Your right hand are eternal pleasures."

Everything good, enjoyable, refreshing, fascinating and interesting is derived from God. God promises that we'll laugh, rejoice and experience endless pleasures in heaven. To be in His presence will be the very opposite of boredom.

4. Will we know our loved ones and have ongoing relationships with them?

Scripture gives no indication of a memory wipe causing us not to recognize family and friends. Paul anticipated being with the Thessalonians in heaven (1 Thess. 4:13-18), and it never occurred to him he wouldn't know them. In fact, if we wouldn't know our loved ones, the encouragement of an afterlife reunion would be no encouragement at all.

Relationships among God's people will resume in ways even better than what we've known here. Once the curse is lifted and death is forever reversed, we may live out many of the "could have beens" taken from us on the old earth.

5. Will there be animals—and is it possible the pets we've loved will be there?

Scripture says a great deal about animals, portraying them as earth's second most important inhabitants. God entrusted animals to us, and our relationships with animals are a significant part of our lives.

Scripture's descriptions of animals peacefully inhabiting the earth may have application to a millennial kingdom on the old earth, but their primary reference appears to be to God's eternal kingdom, where mankind and animals will together enjoy a redeemed earth.

Many people also want to know whether their pets might live again.

Romans 8:20-23 sees animals as part of a suffering creation eagerly awaiting deliverance through humanity's resurrection. This seems to require that some animals that lived, suffered and died on the old earth must be made whole on the new earth.

Wouldn't some of those likely be our pets? Wouldn't it be just like God to take animals entrusted to our care in the old world and allow us to enjoy with them the wonders of the new world?

Jesus' death and resurrection made the way for us to be restored to the Father in our eternal home. If you know Jesus, I look forward to meeting you there and worshiping our King together in that incredible and indestructible world He has planned for us. 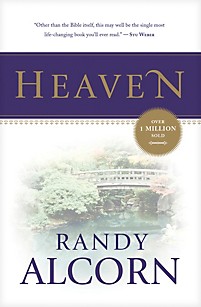 Heaven: We all have questions about what heaven will be like, and Randy Alcorn's Heaven helps answer some of these questions. By sharing from his extensive research on the topic—all from a biblical perspective, his writing will surprise readers and stretch their thinking beyond anything they've imagined heaven to be like.

Heaven will help readers strive for eternity while they're living on earth.

Randy Alcorn is the author of more than 40 books and the founder of Eternal Perspective Ministries (EPM). He served as a pastor for fourteen years, holding degrees in theology and biblical studies, and has taught on the adjunct faculties of Multnomah University and Western Seminary in Portland, Oregon. Randy resides in Gresham, Oregon, with his wife, Nanci.

What Can Revelation Teach Us About Hope?

9 Facts About Heaven that Will Surprise You

In heaven, we'll embrace God's holiness and justice. God will be our source of joy. But will we miss things from earth? Will we become angels? Will we work? Author Randy Alcorn answers some of the common questions we all have about heaven.

How to Live Your Life with Heaven in Mind

"We know that if our temporary, earthly dwelling is destroyed, we have a building from God, an eternal dwelling in the heavens, not made with hands" (2 Cor. 5:1).