The breathtakingly beautiful truth about grace is that it’s OK to not be OK.

My son, Cal, made a special gift for me at school for Valentine’s Day. I knew how excited he was about this gift because he’d been talking about it for days. But on the day he brought it home, he handed the wrapped present to me with hesitation and simply said, “I’m sorry, Mom,” as he released it into my hands.

“Why are you sorry, baby?” I asked with concern in my voice.

“You’ll see,” he replied with bowed head and downcast eyes.

I unwrapped the paper to discover a homemade ceramic leaf. It was burnt-orange and beautiful. And it was also broken and glued back together again. The repair job wasn’t perfect, and cracks remained.

I looked at Cal, whose head was still bowed, and I lifted his chin, looked deep into his beautiful hazel eyes, and assured him, “Buddy, I love this colorful leaf. I love it simply because your precious hands made it. It might be broken, but it’s beautiful to me. I don’t need it to be perfect. I love it just the way it is.”

Cal’s eyes lit up and a tender smile spread across his face. He put his head on my shoulder and spoke softly, “Thanks, Mom.”

As we sat together, his head still on my shoulder, I said, “Now that I think of it, I’m going to put this precious leaf on my desk as a reminder of how God feels about you and me. Buddy, we’re imperfect and we carry brokenness, but Jesus loves us and welcomes us and even wants us just as we are.”

I felt him start to giggle as he lifted his head from my shoulder and responded, “I should have known you were going to say something like that.” I gave him a tight squeeze, and whatever fear he’d been carrying about his offering not being “good enough” was lifted.

God Loves Us in Our Brokenness

But here’s the thing: I want you to know this isn’t how I would’ve responded in my early days of parenting. Yes, I would’ve loved my son’s leaf just as much, and I would’ve been quick to tell him so. But his broken leaf wouldn’t have reminded me about the way that God welcomes us and loves us in our brokenness. I thought God only welcomed the “perfectly put together” version of me. And I thought my brokenness made me a bad mom. It wasn’t OK to not be OK. So just like my son feared bringing his broken pieces to me, I feared being honest with my children about my brokenness, and I feared bringing my broken pieces to God. Rather than confess my need for grace, I tried to fill in my cracks with good works. I tried to work my way to wholeness.

But if we turn to Scripture, we discover that because of the fall, we actually enter this world of sinful, fallen, broken people. We’re broken people in broken relationships in a world that has been broken by sin. In fact, we aren’t just broken. Scripture says we are beyond broken. We are dead in our sin. (See Eph. 2:1; Rom. 5:12.) And if we say we have no sin, we deceive ourselves and the truth isn’t in us. (See 1 John 1:7-8.)

Scripture reveals that brokenness isn’t just a temporary feeling we experience when we do something wrong or when we’re wronged. It’s not just a “season” we walk through. It’s actually the state in which we exist and live on this side of heaven. Of course, that would be bad news if that were the end of the story. But instead, the bad news is actually the doorway to the good news. Because it’s only when we finally accept how dead we are in sin and how far we’ve fallen short of God’s holy requirements that we can begin to embrace and celebrate the necessity of God’s grace.

Grace Frees Us To Be Honest

Brennan Manning framed this beautifully when he wrote: “To be alive is to be broken; to be broken is to stand in need of grace.” Manning goes on to write, “Jesus comes not for the super-spiritual but for the wobbly and the weak-kneed who know they don’t have it all together, and who are not too proud to accept the handout of amazing grace.”

"When we accept how utterly dependent we are on the grace of God and the transforming power of the Holy Spirit, we will finally stop fighting our brokenness and embrace our belovedness."

See, the focus of the Christian life isn’t overcoming our brokenness and getting better at being good. It’s actually our increasing awareness of just how broken we are in the flesh that makes us so grateful for grace and reliant on the transforming work of the Holy Spirit. When we accept how utterly dependent we are on the grace of God and the transforming power of the Holy Spirit, we will finally stop fighting our brokenness and embrace our belovedness.

While we’re already perfect in Christ, we aren’t yet whole in the flesh. Indeed, the wholeness we crave is coming!

Because Jesus was broken for us, we will, for all eternity, be whole. Until then, we’re both broken sinners and beloved children of God. We’re the broken-beloved.

We see this truth revealed over and over again in God’s Word. In 1 John 3:2 we read, “Dear friends, we are God’s children now, and what we will be has not yet been revealed. We know that when he appears, we will be like him because we will see him as he is.”

While we wait for God’s “until then,” let’s make our brokenness the very thing that keeps us close to Jesus. Let’s not miss the profound beauty and blessing that can be experienced in this place of broken belovedness.

So I want to encourage you, dear mom. God isn’t disappointed in you or mad at you when you have to come to Him again and again with your broken pieces. God’s specialty is rescuing and redeeming broken people and carrying out His good purpose through them. In fact, it’s only when we acknowledge and accept our own brokenness that we will finally be free to live the authentic and abundant lives Jesus secured for us, and be empowered to lead our kids in doing the same.

Oh, He will make good on His promise of wholeness when sin is wiped out for good. Until then, His love and light inside you can shine through your cracks, to your children, to the glory of His grace.

This is how we create a home of confession, not perfection. A place where — when we fail and the Holy Spirit does the convicting and sweet work in our hearts — we can run to Jesus, repent, and receive forgiveness alongside our children. We’re free to confess our brokenness because we have a Savior who loves and welcomes the broken. We’re the broken-beloveds. 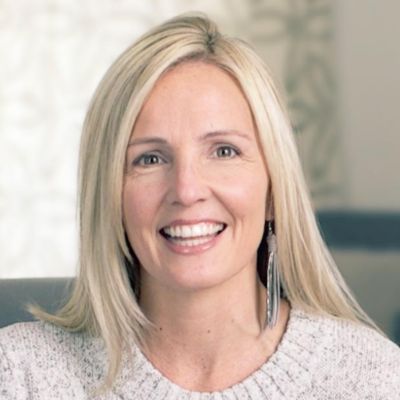 Jeannie Cunnion is the author of Parenting the Wholehearted Child, Mom Set Free, and Mom Set Free Bibe Study. She is a frequent speaker at women’s conferences and parenting events around the country. Her passion is encouraging women to live in the freedom for which Christ has set us free, a message her own heart needs to be reminded of daily. Jeannie lives in Connecticut with her husband, Mike, and their four boys.

Build a Stronger Bond with Your Mother-in-Law

The last five years with my mother-in-law were sweeter than all the years that came before them, combined. I have Ruth the Moabitess to thank for that, and the Lord she vowed to follow.

Why You Don't Need to Be a Perfect Mom

From teacher and confidant to helper and friend, moms do it all. This Mother’s Day, consider a gift that will help your mom grow in her own faith walk, bring her close to Jesus, and thank her for her selfless love. 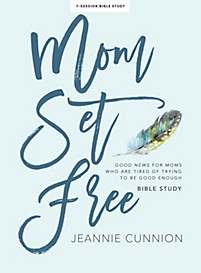 In this 7-session study, discover how the gospel message can empower you to parent in the freedom of God’s sovereignty, so that you can breathe deeper, walk lighter, and enjoy your children — and the parenting journey — more than ever before.