Breathe: Refocus Your Attention on Christ

God clearly intends to situate Himself out of the margins and squarely into our center.

"God clearly intends to situate Himself out of the margins and squarely into our center." Read this excerpt from the Bible study Breathe: Making Room for Sabbath by Priscilla Shirer.

I enjoy stations like the Health Channel and the Discovery Channel. They always seem to air programs that capture my attention. Whether on a matter of biology or a detail of anatomy, stations like these always take an intriguing and informative perspective that keeps millions of viewers glued to their television screens.

Recently, I ran across a program that showed a series of magic tricks, thrilling illusions that were difficult to figure out. Each one was more compelling than the last. I sat back in my chair, bewildered. Every time I thought that I might've figured out one of the tricks, I was wrong. Not even close.

I figured the producers must have been doing a series of fancy camera tricks to pull off the clever bait-and-switch act. But the show's host assured the viewing audience that nary a camera was involved in any deception. In fact, he said, there was no need for them to trick us because we are actually masters at doing it to ourselves.

"Inattentional blindness," they call it. It's the foundation for every Houdini-like illusion crafted since the beginning of time. Magicians rely on it. The success of their show depends on it. Sometimes called "perceptual blindness," this phenomena is defined on one Internet encyclopedia as a human's "failure to notice a fully-visible, but unexpected object because attention is engaged on another task, event, or object."

I think most humans fall prey to inattentional blindness regularly, not only when watching a skilled magician perform his show on stage. Happens to me all the time, actually.

Inattentional blindness is the trick our own brains play on us - keeping us preoccupied with one thing while rendering us unaware and oblivious to another. So while we are concentrating somewhere else, another more critical action could be occurring within view, but without our conscious knowledge. Then, shocked and bewildered, we realize we missed something, or Someone, who really deserved our full attention.

The children of Israel had missed seeing Yahweh, even though He'd been directly in their field of vision for years. Overwhelmed with the many moving parts of their slavery in Egypt and then the distractions of wilderness travel, they had moved Him to the periphery of their attention. Even His gifts to them (this manna, for instance, delicate and delicious) had become more of a focus than Yahweh was.

They'd become consumed with the manna, hoarding it beyond the twenty-four hours they'd been licensed to keep it, seeking to gather it beyond the length of days they'd been instructed to collect it. They were distracted, preoccupied, and sidetracked from Yahweh's original intention for their liberty.

In setting out to research the Sabbath, I've discovered one of its primary goals; God gave us Sabbath to refocus our attention, and to cause us to bring to the center stage of our mind and heart the Person whom we have placed at the periphery far too long. Margin keeps us from marginalizing God.

Reading through the children of Israel's experience with my own children has been a delightful undertaking this past year. The whole saga (from the time of their enslavement through their wilderness travels) is filled with enough shocking events that even three boys will lean in close to read, listen, and learn. I mean, with that whole Red Sea business and the thunder roaring on Mount Sinai, it's enough to make all of our eyes widen in suspense.

Without a doubt, our favorite part so far has been the ten plagues. Yahweh masterfully crafted ten miracles to bring immense difficulty to Pharaoh and his kingdom when he refused to release the Hebrews.

A few weeks ago, the boys and I had a blast reenacting the plague of hail. Tiny slivers of crushed ice from a fast-food restaurant, tossed lightly over their heads, might not depict the exact experience of those poor Egyptians being flattened by giant balls of ice, but it was enough to get my kids excited about the lesson, that's for sure. While my boys' favorite verse probably has something to do with frogs or diseased cattle, mine is tucked in Exodus 9 and reads like this: "Then the Lord said to Moses … ‘But, indeed, for this reason I have allowed [Pharaoh] to remain, in order to show you My power and in order to proclaim My name through all the earth'" (vv. 13, 16, NASB). 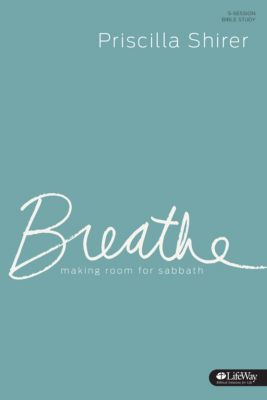 God has always prioritized bringing glory to Himself, even if He needed to unleash the worst of plagues to do it. From the beginning of time until now, God's reasoning and purpose for allowing certain occurrences (or even creating them), His strategy for incorporating certain boundaries, or calling us to particular assignments, has always primarily reflected His intention to reveal His power and magnify His own name. More than anything. Even now, the Holy Spirit's main job in our lives is to bring glory to God, to position Him center stage in our experience (John 16:14). God clearly intends to situate Himself out of the margins and squarely into our center.

This article is excerpted from Breathe: Making Room for Sabbath. Read the complete first session for FREE.

Watch a video sample of teaching from this Bible study: