Understanding Spiritual Warfare and the Importance of Prayer

Spiritual warfare is real. But don't worry, God is with you.

Spiritual warfare is real. In her Bible study "The Armor of God," Priscilla Shirer explains how God has provided everything you need to live victoriously. And that through prayer we recognize and wield the weapons of our spiritual warfare.

Priscilla Shirer's latest Bible study, The Armor of God, takes its name from the well-known spiritual warfare passage in Ephesians 6:10-20. She notes there are actually seven pieces of armor described there, not six, as is commonly thought.

"When Paul talks about spiritual warfare in Ephesians 6, prayer is the seventh piece of armor. It activates all of the rest of the spiritual armor," she said. "When we refuse to pray, it's like having a refrigerator without plugging it in. Prayer is the divinely authorized mechanism God has given us to tap into His power. Without prayer, we'll be ineffective in spiritual warfare. But with it, we will be victorious."

The Truth About Spiritual Warfare

"Everything that occurs in the visible, physical world is directly connected to the wrestling match being waged in the invisible, spiritual world," she said. "The effects of the war going on in the unseen world reveal themselves in our strained and damaged relationships, emotional instability, mental fatigue, physical exhaustion and many other areas of life. Many of us feel pinned down by anger, unforgiveness, pride, comparisons, insecurity, discord, fear. . . and the list goes on. But the overarching, primary nemesis behind all these outcomes is the Devil himself."

Did you catch that? Our biggest problems are actually spiritually rooted. Ephesians 6:12 says the same: "For our battle is not against flesh and blood, but against the rulers, against the authorities, against the world powers of this darkness, against the spiritual forces of evil in the heavens." Spiritual warfare is real.

Craving and Praying for Spiritual Vision

We also have a need for spiritual vision — for an understanding of who we are in Christ, and all that entails. Priscilla reminds us that God has provided us with everything we need to win the spiritual battles we face, emphasizing that we need to know that, believe it, and act upon it. And it's through prayer that we recognize and wield the weapons of our spiritual warfare described in Ephesians 6.

"The spiritual armor in Ephesians 6:10-20 (truth, righteousness, peace, faith, salvation, God's Word, prayer) is merely a repeat, a different way of describing what Paul had already been explaining in the rest of his letter. Because how could the readers ‘put on' or ‘take up' armor that they didn't understand or even know they had? The first step for them — the first step for us — in utilizing the spiritual resources we've been given is to have our spiritual eyes opened so that we can see them," she said.

To that end, Priscilla urges us to pray for more spiritual vision. She says we should ask the Lord to open our eyes to see the enemy's activity and to be more aware of the spiritual resources He has given us to disarm and defeat him. Victory is available to us, but it will only come as we pray for God's help in the battle.

Priscilla reminds us the enemy operates by deception. He wants us to believe lies about him, about God, about ourselves and about what's important and true. And he's very strategic in the way he goes about it.

"The enemy's attacks are always wrapped in the packaging of deception, always designed to manipulate the truth about God, and about your value in Him. He desires to lead you into sin so that fellowship is broken between you and God — this way you'll be disconnected from the Source of true power and strength," she said.

"The evil temptations that appeal to your specific desires and happen to show up when you are most vulnerable are not accidental. They are his deceptive tactics (and that of his evil entourage), specifically designed, timed and personalized in hopes that you fall prey to his demon ploy and miss out on experiencing an abundant life in Christ," she said.

Why It's Important to Pray

Priscilla believes the enemy often attacks us at points of strength, influence and weakness. So, we need to prayerfully discern where the attacks are likely to come from, and take measures to defend ourselves in the power of God's strength.

"Consider your areas of greatest strength and greatest weakness. Keep a close eye on both of these areas and safeguard yourself through prayer. These areas are likely the places where you can expect the enemy to target his attacks against you. When you know where to look, you can see him coming a mile away. He's really not that clever. He's just cunning," she said.

We're fighting a spiritual war with an enemy whose primary tactic is deception. This enemy can be defeated through the spiritual resources God provides, and these resources are activated and empowered through prayer.

"Prayer is simply an outpouring of your heart to God and then making room in your life to hear back from Him in His Word and as He orchestrates your circumstances. God wants to have a conversation with you. He longs to hear what is really on your heart. He wants openness and honesty."

How to Pray: Be Raw, Frank and Real with God

"Your prayer needs to be authentic and heartfelt. There is no need for ten-dollar words and poetic prose. Just be raw, frank, and real with God," she said. "I believe prayer works. Prayer has been more effective in my life than human solutions. Time, and time and time again, I've seen that lasting change comes only through prayer. When I pray — release it into His hands — God accomplishes what I can't do in my own strength."

Priscilla believes prayer is absolutely crucial to knowing God, relating to Him and experiencing His power and grace in your everyday life.

"Prayer is how we see heaven invade earth. It's what opens up the floodgates for God to come down and be involved in our everyday circumstances."

Learn About The Armor of God Bible Study

This is the first in a series of devotional readings for the Advent season. Week One focuses on how waiting on God can strengthen our faith in God and His promises.

Christians are not the only ones who have historically been interested in or aware of a spiritual realm, the existence of angels and demons, and those forces that interact with our world. But the Bible is clear that a spiritual world exists, that spiritual warfare is a significant part of reality.

Why Prayer is Essential in the Life of a Leader

Without God's constant guidance in our lives, how can we be confident of what we are teaching, how we are ministering, or why we are even leading? Leading others is just too big of a responsibility for us to handle without continual prayer.

The most powerful prayers, whether public or private, are the ones devoid of meaningless, pious platitudes. Instead they’re simple, assured, and include these three important markers. This is how Elijah prayed. 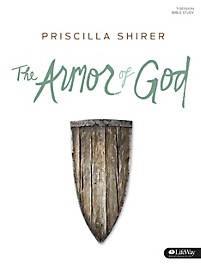 All day, every day, an invisible war rages around you — unseen, unheard, yet felt throughout every aspect of your life. This 7-session Bible study by Priscilla Shirer explores the devilish enemy who seeks to wreak havoc on everything that matters to you.

Read a free sample of the study.