What Can Studying the Book of James Teach Us About Faith?

We are called to live out a genuine faith through good works.

The Book of James is a wonderful companion piece to Jesus’ teachings as recorded in the four Gospels. James has a strong ethical emphasis that’s consistent with the moral teachings Jesus gave to His disciples.

The Book of James is filled with practical wisdom for Christians, calling us to live out genuine faith through good works. In our own ability, we cannot stand in the face of adversity. Without faith we could never find the strength to trust God. We would never be able to see above the trials we meet and to keep our eyes focused on the King while counting our trials as joy. This is the essence of James. We don’t work to be saved; we work because we are saved.

The Book of James is also a wonderful companion piece to Jesus’ teachings as recorded in the four Gospels. James has a strong ethical emphasis that’s consistent with the moral teachings Jesus gave to His disciples. James also mirrors the sometimes harsh denunciations Jesus spoke against religious hypocrisy. Like Jesus’ teachings, the Book of James is a source of both exhortation and comfort, reproof and encouragement. James is known for being extremely practical, yet it contains some of the most profound theological truths in the New Testament.

As a general epistle, James was addressed to a broad audience (Jewish Christians) rather than a specific audience (for example, Christians at Ephesus only). There’s an obvious concern to address internal and external difficulties that Jewish Christian congregations faced. Externally, they were facing trials (see 1:2),   oppression of various sorts exerted by wealthy landowners. It doesn’t appear that the oppression was religious in nature. Internally, it appears that dissension was caused by a lack of self-control (see 1:13-17); uncontrolled speech; and false teachings that led to a misunderstanding of true religion (see 1:19-27; 2:1-4; 3:1-8), favoritism toward the wealthy (see 2:1-13), and selfish ambition that opened the door to murder and criticism (see 4:1-12).

James addressed these issues primarily through the application of principles defined by the Old Testament wisdom tradition. The solutions he named reflected the wisdom from above that comes from “the Father of lights” (1:17), who generously gives wisdom to those who ask for it. Wisdom is required for proper speech in worship and for determining who ought to teach (see 1:19-27; 3:1-8). Wisdom is also needed to avoid internal conflicts that create dissension within congregations (see 3:13-18; 4:1-12). The theme of faith in action is also important (see 1:19-27; 2:14-26); James demonstrated that faith that doesn’t express itself in good works is useless. Another theme of the epistle is ethics, especially social justice (see 2:1-13; 4:1-12; 5:1-12).

The Book of James is a letter (an epistle), though only the greeting conforms to the ancient Greek form exemplified in Paul’s letters, especially Galatians.

The Book of James has also been compared to Old Testament wisdom literature. Although James contains wisdom elements, such as comparing the wisdom of the world with the wisdom that comes from God, it also contains exhortations and prophetic elements that aren’t common to wisdom literature.

James was probably written between AD 48 and 52, though nothing in the epistle suggests a more precise date. James’s death in AD 62 or 66 means the epistle was written before this time. Similarities to Gospel traditions and Pauline themes are suggestive. If Mark was written around AD 65 and time is allowed for the events of Acts 15 and 21 to have occurred between Paul’s first and second missionary journeys, a date between AD 48 and 52 seems most likely.

James led the Jerusalem church. The reference to “the twelve tribes in the Dispersion” (James 1:1) suggests the letter was written to Jewish Christians living outside Israel. The reference to a synagogue in 2:2 also suggests that his audience was Jewish Christians. References to their circumstances (for example, oppression by wealthy landowners, 5:1-6) could refer to congregations anywhere in the Roman Empire.

Benefits of the Study:

• Gain a better understanding of the Book of James and apply its practical wisdom for all Christians.

• Learn how to deal with trials and temptations, understanding that enduring adversity ultimately brings joy.

• Learn to extend mercy, not harsh judgment, to others.

• Realize that words are important and must be used for good, not evil.

• Learn to fight against the passions and desires at war within us.

• Recognize the importance of praying for one another in sickness, health, suffering, and joy.

• Accept the challenge to speak truth to our brothers and sisters who wander from the faith.

• Come to humbly view all of our days as under the sovereign will of the Lord.

Features of the Study: 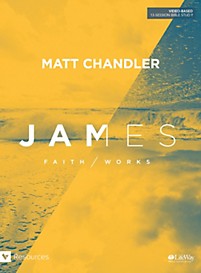