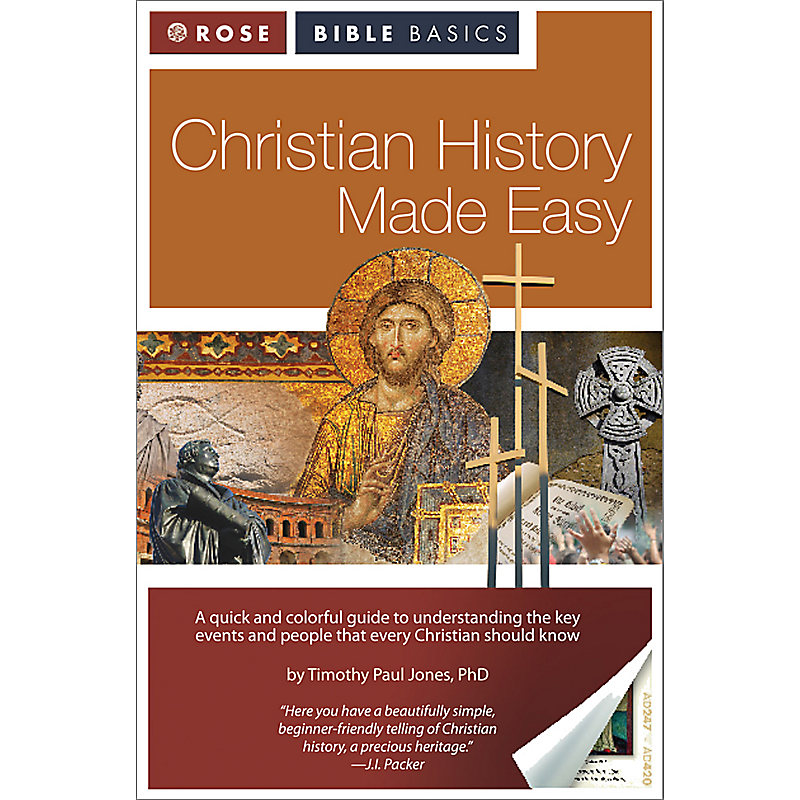 The Great Awakening and Church History in America and Europe

Church History in the 20th and 21st Century

Each Chapter of Christian History Made Easy Includes

Endorsement for Christian History Made Easy

"Rose's product line includes a wonderful collection of high quality, visually attractive materials that lend themselves to learning the basics of the Christian Faith. In most areas where alternative views exist, they are faithfully presented leaving the reader to decide which best fits their understanding of scripture….I have used Christian History Made Easy for my Sunday school class and found it to be very well done. This book has a great collection of auxiliary Study Guide questions. The author, Timothy Paul Jones is obviously a practiced teacher. I used an early edition. The recent upgrade of this package looks even better…" —Dr. Gene A. Stringer, Elder, Christian Church of Ashland, Oregon

"Dr. Timothy Paul Jones is a brilliant young biblical scholar who helps simplify the complex. His [resources] are great and sorely needed during our time when many are biblically illiterate and know even less about Church history."
—Dr. Jerry Newcombe, author, TV host, and spokesperson for Truth that Transforms with Dr. D. James Kennedy (formerly The Coral Ridge Hour)

Timothy Paul Jones serves as a professor of Christian ministry and as associate vice president at the Southern Baptist Theological seminary, where he teaches courses in applied apologetics and family ministry.

Before teaching at Southern Baptist Theological Seminary, he led churches in Missouri and Oklahoma as pastor and associate pastor. Dr. Jones has authored or contributed to more than a dozen books, including PROOF; Conspiracies and the Cross; and, Christian History Made Easy. In 2007, Charles Colson listed him as one of “four names you need to know” when responding to the new atheists and in 2010, Christian Retailing magazine selected Christian History Made Easy as the book of the year in the field of Christian education.

He is married to Rayann and they have three daughters. The Jones family works in SojournKids and community group ministry at Sojourn Community Church.

A Message from Timothy Paul Jones, author of Christian History Made Easy

My name is Timothy Paul Jones, and I love living in the city of Louisville with my wife and daughters. Over the past two decades, I've had the privilege of leading several congregations as a pastor and in associate ministry roles. Now, I serve as associate professor of leadership and as associate vice president at one of the largest seminaries in the world, The Southern Baptist Theological Seminary. Here, I invest my time in mentoring a rising generation of God-called ministers of the gospel. I also edit The Journal of Discipleship and Family Ministry and write books in the fields of history, apologetics, and family ministry.