He has already provided strength to sustain us on our journey.

This Advent season, it's important to remember that our preconceived notions or unrealistic expectations blind us to the ways God is answering our prayers, to the point that we don’t believe He’s at work because it doesn’t look or sound like what we expected.

The longer we wait for something, the more we tend to imagine exactly what it will be like. But both Scripture and personal experience teach us that if we expect things to be a certain way, then we can fail to see the fulfillment of what we’ve been waiting and praying for. This is not unlike what happened to the Samaritan woman when she met the Messiah at a drinking well.

Imagine growing up hearing prophecies about the long-awaited Messiah. Imagine your mother brushing your hair while telling you a story about the Savior of the world who was to come. Perhaps at the dinner table you discussed the coming of the Anointed One, or right before bed your father told you a story about the promised King. Undoubtedly you created a picture of Him in your mind. What would He look like? What would He sound like? What would He wear? In your child-like imagination, He most likely would not look like an ordinary man. Perhaps He looked spectacular, effervescent, and most certainly recognizable.

John 4 introduces us to a Samaritan woman drawing water from a well in the heat of the day, long after the other women have drawn from the well (most likely an attempt to avoid the shame of her relational history, which comes to light later on). While she was drawing the water, a Jewish man—Jesus—approached her and asked her for a drink. Both a Jew associating with a Samaritan and a man speaking to a woman in public were unheard of during this time in Middle Eastern history. You can almost hear the surprise in her voice when the Samaritan woman replied in John 4:9, “How is it that You, a Jew, ask for a drink from me, a Samaritan woman?”

"Our preconceived notions or unrealistic expectations blind us to the ways God is answering our prayers, to the point that we don’t believe He’s at work because it doesn’t look or sound like what we expected."

Jesus responded, “If you knew the gift of God, and who is saying to you, ‘Give me a drink,’ you would ask him, and he would give you living water” (v. 10). Jesus went on to explain that He is the living water and the source of eternal life and salvation. That she was a Samaritan and a woman did not matter. To Jesus, she was simply a sinner, and He was there to save her soul.

Imagine the woman’s surprise when she finds out that the Man who asked her to draw water was the Messiah her people had been waiting for—God Himself on earth, and He was talking to her! Perhaps she didn’t recognize Him because He didn’t fit the image of the Messiah that she created in her mind. Maybe she failed to recognize Him because she was expecting a different message. She clearly stated, “He will explain everything to us” (v. 25). One can only wonder what type of explanation she was waiting for.

In this way we can all relate to the Samaritan woman. Our preconceived notions or unrealistic expectations blind us to the ways God is answering our prayers, to the point that we don’t believe He’s at work because it doesn’t look or sound like what we expected. The Messiah who she had heard about, who she was waiting for, was standing in front of her. How many times have we waited for something that was right in front of us?

This Advent season, like many seasons in our lives, can feel like a season of waiting—for unfulfilled longings, deferred hope, promises yet to be kept. Even as we wait though, God continues to provide. And quite often, He provides in a way we aren’t expecting. Our hope has come, and although we continue to look forward to His second coming, we know that God has already provided strength to sustain us on our journey, and the hope we have in Him is an anchor for our soul (Heb. 6:19).

Excerpted from Our Hope Has Come: Celebrating the Promise of Advent. Published by Lifeway Press®, © 2021 Lifeway Christian Resources, Nashville, Tenn.

Advent, God's Love, and Our Love for Others

God sent His only Son, Jesus Christ, to earth to rescue us in love and by great sacrifice. Great love can be talked about, deep passionate love can be expressed verbally or even written down, but love expressed in action proves that it actually exists.

This is the fifth in a series of devotional readings for the Advent season. Week Five focuses on the gift of the Christ child, and treasuring our encounters with the living God.

This is the fourth in a series of devotional readings for the Advent season. Week Four focuses on what love really is — Christ coming to earth because of His love for us. 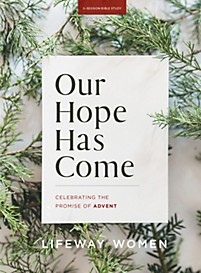 In this 5-session Advent Bible study, you’ll find encouragement from the lives of people in the Bible who trusted God’s promises and said yes to God’s plans. You'll discover the importance of celebrating God’s kindness and choosing to trust in His promises, even when the future seems uncertain.

Read a free session of Our Hope Has Come.